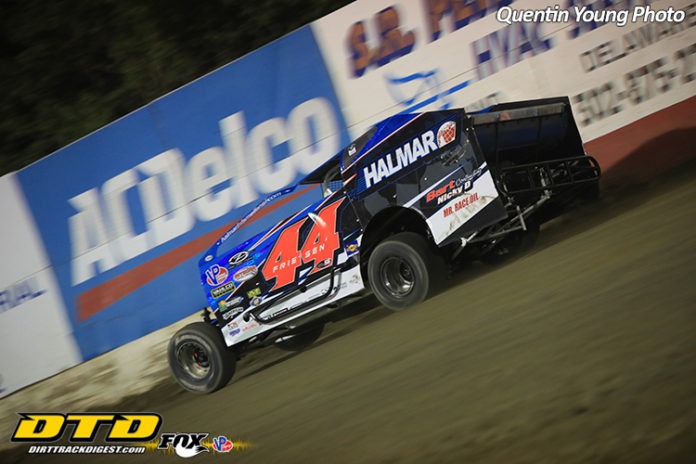 DELMAR, DE – Tuesday night’s Short Track Super Series 50-lap event at Delaware International Speedway was another battle of the titans, with Matt Sheppard squaring off against Stewart Friesen for much of the feature. In the end, it was Friesen taking the crown and a $5,000 payday.

It was Ryan Watt over Billy Pauch Jr. in the early circuits, with Watt holding a slim lead through the first five laps. A lap six caution allowed Pauch to take a swing on the restart, taking the lead from Watt. Behind those two, Sheppard got around Friesen for third.

The top four of Pauch, Watt, Sheppard, and Friesen remained packed together following the restart, with Sheppard getting under Watt for second on lap ten. Sheppard took a look at Pauch, but a caution on lap 11 negated any pass. However, Sheppard went back to work on the restart, taking the lead from Pauch on lap 13. A yellow and restart shortly after allowed Friesen to steal second, setting up another Sheppard v.s. Friesen battle.

With Sheppard low, Friesen was relentless on the top. After initially losing ground, Friesen started to reel in the #9s. On lap 23, Friesen blasted around Sheppard to take the top spot, but Sheppard wasn’t going away quietly.

By lap 30, traffic was looming for the leaders. Using traffic, Sheppard nosed out in front and nearly cleared Friesen, but lapped cars on the bottom allowed Friesen to dispose of Sheppard. With 35 laps in, the leaders had got into some clean air once more, but Friesen was up by one and a half seconds.

On lap 41, third place Pauch Jr went up in smoke, stopping as the yellow waived. Friesen got a rocket restart, leaving Sheppard to fend off Andy Bachetti and Jimmy Horton, both of who started far deep in the field. Horton’s line mirrored his Halmar teammate’s, taking third from Bachetti.

Up front, Friesen’s lead stabilized at a shade over a second over Sheppard. With equal lanes on the track, Sheppard couldn’t close in, as Friesen crossed under the checkered first for the Diamond State 50 win. Sheppard finished second, with Horton, Bachetti, and Matt Stangle the top five.

“That was tough, Billy Jr. has been fast all year and Matt has been fast for over a decade,” Friesen said. “Matt got me on the bottom, that’s his game down there, but the top came back and I railed that. I got back by him and held him off, I’m not sure how close it was but couldn’t have been much. A lot of work went into this car, its the same car we ran on Sunday at Devil’s Bowl and we weren’t good. We got a lot of racing down here in Delaware coming up, we’ll be basically setting up residence here for the next month. Track was awesome tonight, definitely the best its been since we’ve been down here.”

Sheppard led some laps during the race, but had to settle for second on the evening behind Friesen.

“This track was awesome, the nicest track I’ve raced on in a long time,” noted Sheppard. “I’m kind of kicking myself a little, we were good in the heat and I didn’t touch it for the feature. I should’ve, because we needed to be a little tighter and that was the difference between first and second.”

Horton had a long route to the front, going +12 on the night after starting 15th. The season hasn’t been kind to Horton, recently suffering a back injury in a wreck. A strong run was much needed.

“I was liking the outside tonight for sure,” Horton stated. “That last restart was real good to me and we got up to third. Its been a terrible year, we couldn’t find any speed and I threw the white flag up and called in help. Stew has helped me a ton and it showed, tonight we were rolling really good. I saw Stew making good ground up top as I was coming through the pack, so I tried to follow him and see what we could do.”