PORT ROYAL, PA – Spots were on the line Friday night at the Port Royal Speedway for the Speed Showcase 200.  Drivers navigated their way through five 20-lap qualifying events presented by Dirt Track Digest.  Danny Bouc, Mike Gukar, Billy Pauch Jr., Erick Rudolph and Max McLaughlin each picked up $750 as qualifier winners as well as earning coveted spots in the redraw for the Speed Showcase 200.

Peter Britten showed the way at the start of the first 20-lap heat, with Danny Bouc working his way up to second early on. As laps clicked off, Bouc got faster, reeling in Britten inch by inch. At halfway, Bouc had caught Britten, diving low as Britten rode the top. It took a few laps, but Bouc stuck the pass and led the final seven laps en route to the first heat win. Britten snagged the second redraw spot, with Anthony Perrego, Richie Pratt, and Rick Laubach also qualifying. 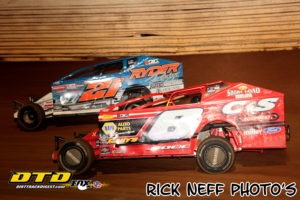 “We’ve been good both nights, but we just weren’t up to my expectations in yesterday’s feature,” Bouc noted. “We were in the first heat tonight which was hammer down, but ran the last heat yesterday and my car felt as good on the slicker stuff there. We just need to get a good tire strategy and we’ll have a shot.”

Mike Maresca, Mike Gular, and Stewart Friesen remained nose-to-tail through the first handful of laps in the second heat, with Maresca narrowly leading the group. A hard slider by Gular nabbed him the lead on lap eight, leaving Maresca to fend off Friesen. As Friesen went to make the pass for second with three laps left, his motor went up in smoke. Gular went uncontested to score the second heat win, with Maresca taking the other redraw spot. However, Maresca lost a motor taking the checkered, with Mike Mahaney, Tyler Dippel, and JR Heffner nabbing qualified positions.

“I think it’s all going to be about tire tomorrow,” Gular stated. “It’s not really wear, but 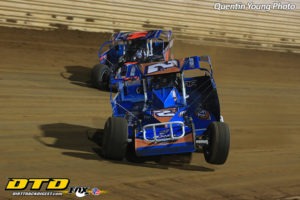 knowing what compound to run to get the heat you need. It’ll be a crapshoot, but you’ll still need a balanced car to get it done. I think whatever good car gets the tires right will win.”

Billy Pauch Jr. snuck by Billy Van Pelt on lap three of the third heat, with Matt Sheppard quickly following through into second. By lap seven, Sheppard had reeled in Pauch and was applying heavy pressure, but Pauch got quicker as the race went on. Pauch slowly pulled away, taking the win in the third 20-lap heat. Sheppard also heads to the redraw with his runner-up, with Demetrios Drellos, Van Pelt, and Jeff Strunk also taking qualifying spots.

“The track is real racy, I’m not sure if people expected it to be way slicker or what,” Pauch said. “This is a different car than we ran last night, but I’ll run this one tomorrow since I think it’s a little better than the other. Just need to change the carburetor and we’ll be real good.”

Alex Yankowski took the lead from Billy Dunn on a lap four restart in the fourth heat, with Erick Rudolph slipping by Dunn and into second soon after. Yankowski was immediately under fire from Rudolph, with Rudolph driving under Yankowski to lead at halfway. The top 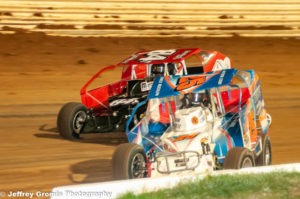 two ditched the rest of the field, with Rudolph motoring away to the win in the fourth heat. Yankowski claimed second, with Larry Wight, Dunn, and Jimmy Horton filling the important top five spots.

“I think the longest race I’ve ran on American Racers is 70 laps, but tomorrow will be two 100s,” said Rudolph. “It’ll be interesting with the tires, I don’t think anyone really knows what the right direction to go is with all the different compounds.”

Max McLaughlin started sixth, but found himself throwing a slide job for the lead on Ryan Godown by lap five in the final 20-lap heat. Once out front, McLaughlin took off, driving 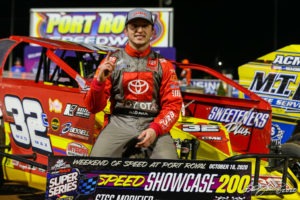 away from Godown and Mat Williamson. Godown surrendered second to Williamson in the final laps, but their battle allowed McLaughlin to check out to a 6+ second win. Williamson will join McLaughlin in tomorrow’s redraw, with Godown, Rocky Warner, and Alan Johnson completing the top five.

“We’re pretty good, I just have to turn,” McLaughlin said. “I’m way too tight up top, but I felt decent in the middle. I think it’ll be good tomorrow but we got room for improvement. I was definitely nowhere near wide open in the middle like those guys were up top.”