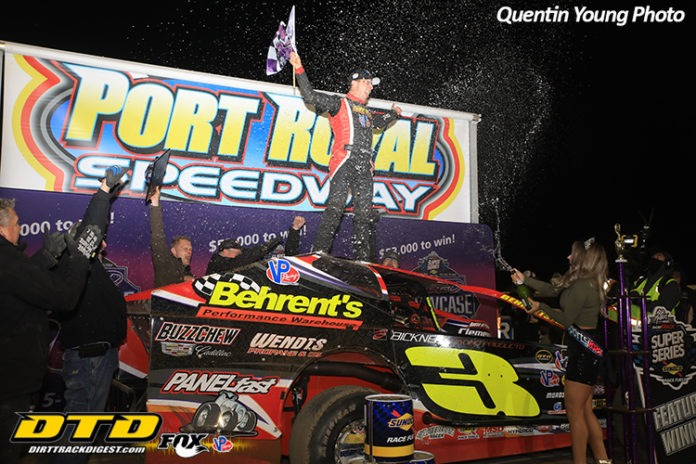 PORT ROYAL, PA – Mat Williamson stole the lead from Stewart Friesen late in the Speed Showcase 200, holding off all advances to score a $53,000 payday in his first Short Track Super Series triumph. 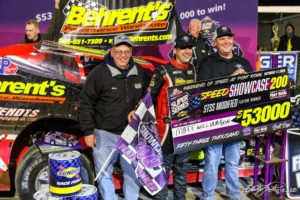 Alex Yankowski led the opening circuits of the 200-lap grind over Danny Bouc, with Williamson making early headway to slide into third. While Yankowski enjoyed a comfortable lead in the first ten laps, Williamson was hawking Bouc, rolling under him and into second with 13 laps in. Instantly, Yankowski’s lead evaporated, with Williamson catching and passing Yankowski on lap 15

Williamson took off, half a straightaway ahead of Yankowski by lap 20. Bouc still trailed Yankowski, but Matt Sheppard was reeling in both. Sheppard disposed of Bouc on lap 24 to snag third, then rolling under Yankowski on lap 27. Meanwhile, Williamson’s lead was up to nearly a full straight.

A yellow on lap 30 nixed Williamson’s lead, with Sheppard hanging within shouting distance on the restart. The top two both floated the middle, with a good gap back to Yankowski and 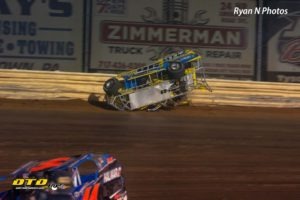 now Max McLaughlin. The red flag flew on lap 42, as a hung throttle on Billy Pauch Jr.’s car sent him hard into the wall, punching a hole in the outside guardrail. Pauch was okay, the car far from it.

Following the hour-long red flag, Williamson pulled away from Sheppard on the restart. By lap 55, Williamson’s lead stabilized at a shade over two seconds, but lapped cars were waiting ahead of Williamson. Within five laps, Sheppard was able to cut the lead in half, and behind him, Anthony Perrego was on the move. Perrego quietly worked to fifth, then to third on lap 62, disposing of McLaughlin and Yankowski.

Williamson started to roll better in traffic, slowly distancing himself from Sheppard again. With good momentum up top, Perrego moved in on Sheppard, taking that spot on lap 67. A lap 69 yellow reset the field, with Williamson leading Perrego, Sheppard, McLaughlin, and Stewart Friesen.

Friesen got the best restart, jumping to third, while Sheppard slipped from third to fifth. Williamson fired well, but his lead peaked by lap 80. Perrego had once more built up his momentum on the cushion, rapidly disposing of Friesen and quickly catching Williamson. On lap 85, Perrego drove to the lead.

A lap 88 yellow threw a wrench in strategy. Friesen hit the pits from third, hoping to cycle to the front at the halfway break. The field remained calm with the impending stoppage, as Perrego led Williamson, Sheppard, McLaughlin, and Peter Britten to the crossed flags.

At halfway, drivers could take fuel, or tires and fuel. If they take tires, they go behind those who took fuel only. As expected, all frontrunners took the opportunity for tires, but eight drivers stayed out. For the restart, Andy Bachetti inherited first, with Rick Laubach alongside in second. Because he pitted one caution prior, Friesen was restarting third.

Bachetti got a good start, but by lap 106, Friesen’s #44 was atop the scoreboard. McLaughlin was leading the charge of the cars that took tires, getting to fourth as Friesen 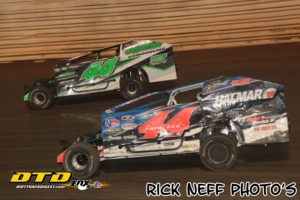 took the lead. Behind McLaughlin, Perrego was in tow, but by lap 111, Perrego had snagged the spot from McLaughlin.

A yellow on lap 117 got rid of Friesen’s lead over Bachetti and Ryan Watt, and importantly giving the cars of Perrego, McLaughlin, and Sheppard a chance to erase their deficit. Friesen took off, while Watt had a rough restart, allowing Perrego to get third. Bachetti hung tough, defending well against Perrego for a handful of laps, with Perrego finally taking the spot on lap 128. With the battle, it allowed Friesen to open up a three second lead.

Friesen’s car looked impeccable through traffic, rim-riding around the top and by any lapped cars. This allowed Friesen to consistently grow his lead, nearing a straightaway by the three-quarter mark. On lap 150, the yellow waived for a slow car, allowing Perrego, Bachetti, and Williamson some clear track to go after Friesen.

Friesen was consistently a tick quicker than Perrego and Williamson after the restart, but both seemed close enough to not make Friesen comfortable. Another yellow flew on lap 160, and Friesen didn’t launch as well. After a handful of laps, Friesen pulled some distance on Perrego, but Perrego put up a stout challenge on the initial green. Britten’s top five run ended in the pits on lap 165, then Sheppard slowed from fifth for a yellow on lap 168.

With Friesen and Perrego high, Williamson went low. On lap 175, Williamson drove under and by Perrego, holding within striking distance of Friesen. Another caution with 20 laps remaining let Williamson take a direct swing at Friesen.

Friesen picked the bottom for the restart, rather than the top like prior. Friesen slid from the bottom to the middle in turn one, and Williamson did the opposite. Driving hard into three, Williamson completed the pass, snatching the lead on lap 182.

Williamson ran low, holding a lead of about one second as Friesen destroyed the top. The pair ran equal times through lap 190. Williamson seemed on pace for another high-dollar win, but a yellow on lap 192 meant he had to survive one final charge by Friesen, Perrego, and Sheppard from the rear with fresh tires.

Williamson ran the bottom perfectly in the final handful of laps, with Friesen an inch off the wall. Sheppard and Perrego went to war for third, but up front, the checkered fell first on Williamson for the $53,000 win. Friesen finished a close second, with Sheppard, Perrego, and Larry Wight completing the top five.

“This is awesome, but it definitely sucks not being able to celebrate such a huge win with all my friends and family watching over in Canada,” Williamson said. “This is a brand new car the Behrents team put together for this race, and it was a rocketship. We weren’t that good the first half, we threw our plan out the window, but those guys put their heads together in the pits and we were great. I’m tired of eating ramen noodles this year, so this big check will help for sure.”

Friesen came home a close second after leading roughly 80 laps. The week was far to plan for the Halmar team, including running their old, smaller 360 motor after blowing up their primary bullet on Friday. Friesen came from deep, starting near the back of the field with his heat troubles.

“I was real far up there trying to get something going, and before that last yellow I think he was coming back to me,” said Friesen. “That last yellow just killed me, but congrats to those guys, they had a great car and did it right. We’ve had a bad couple weeks, so a good run like this was needed to get our mojo back.”

It was an up and down night for Sheppard. After a late flat and going to the tail, Sheppard rallied and nearly won the show. A couple late yellows allowed Sheppard to charge, getting to third in the last laps.

“After we got that flat, the fresh rubber certainly helped,” Sheppard noted. “We weren’t perfect, and I think we would’ve had a better shot with double file restarts at the end. Those guys were just good, and the single file kept me down just enough to not get them. I couldn’t roll them on the bottom, so I needed to be up top there late.”