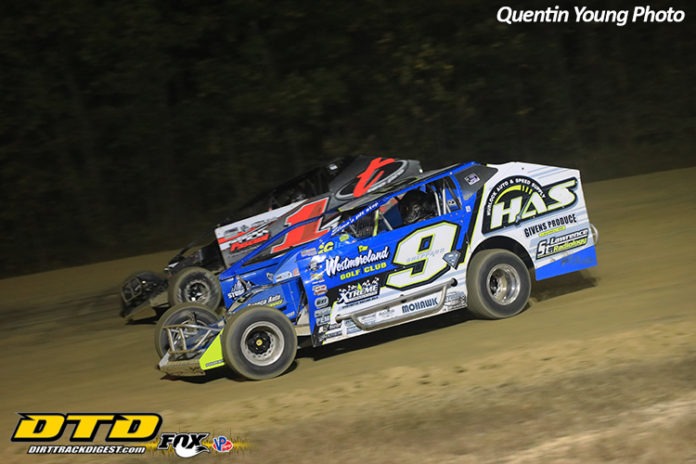 GEORGETOWN, DE – Matt Sheppard started near the front, went to the pits, restarted at the back, and stormed to the win in the final Short Track Super Series event of 2020, taking his first ever Georgetown Speedway win in style to the tune of $7,000. Sheppard’s 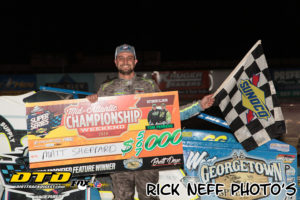 march through the field was capped off by a late pass on Stewart Friesen to nab his third Short Track Super Series win of the year.

Rick Laubach got the jump on Friesen at the start of the 44-lap main, with Laubach holding tough out front through a number of early restarts. By lap ten, some green stretches were being strung together, and Laubach flexed muscle and put a bit of space between himself and Friesen.

By lap 16, the leaders had hit heavy traffic, and the lead Laubach had built was suddenly erased. Friesen went searching among some different lanes, quickly closing in on Laubach. On lap 19, Friesen drove to the bottom, to the lead, then immediately distancing himself from Laubach before a lap 21 yellow.

In one of the early cautions, Sheppard went to the pits with a flat right front, and had worked to ninth by the lap 21 caution. In just two laps, Sheppard darted to fourth. Another yellow on lap 23 gave Sheppard another swing, driving to second and immediately pressuring Friesen.

With Friesen knowing he was under fire, Sheppard went on the offense and tried a variety 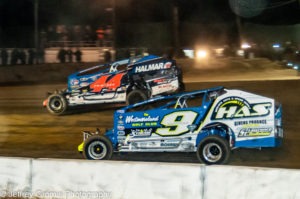 of lanes. Switching to the top, Sheppard found good speed, driving by Friesen on the cushion to lead lap 31. Cautions never gave Sheppard much of a chance to pull away, but great restarts meant Friesen wasn’t given an opportunity at regaining the top spot.

On a lap 37 restart, Friesen started bouncing up the track, allowing Billy Pauch Jr., Anthony Perrego, and Tyler Dippel to slide by. Friesen regained the spot on Dippel, while Pauch and Perrego battled hard. However, this was all behind Sheppard, who stormed away to his 20th win of the year, but first ever at Georgetown.

“This car was just unreal,” Sheppard said. “That flat early was just a racing deal, I got clipped in the right front under a guy and it cut the tire down, but with these big doors, I’m not sure he could’ve seen me down there. This place has always been a thorn in my side, so when we got the flat, I just thought ‘oh, this again,’ but we had such a good car we could drive back through.”

This season hasn’t been quite to Sheppard’s standards. In recent years, Sheppard has been hovering around the 40-win mark, but aided with the shorter season, barely clipped 20 with his win tonight. 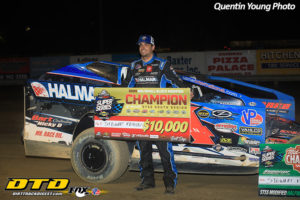 “2020 has been tough, not a good season for us,” noted Sheppard. “This was win 20 on the year, and I definitely would have been on the grumpy side this winter if I couldn’t get that number. I’m not really sure why we were so good through the rough stuff tonight, during the heats my times were good but I just felt great through the holes. I didn’t touch a thing on it for the feature and it must have worked.”

With his P2 finish, Pauch took the Georgetown Speedway track championship. Although falling just short of Friesen for the STSS South title, Pauch still added one big trophy to his resumé.

“It’s been an interesting past few months,” Pauch said. “I’m just glad to be here and running well, but I just don’t think I was up enough in the seat at the end of that thing. The title is pretty cool, my dad never got a title here so to do something he never did is definitely fun.”

In a 44-lap race dedicated to his late father Tom, Anthony Perrego was in contention for the win. Although not the big check, the sentimental favorite nailed down third at the checkered.

“We were good, just not enough to win it,” Perrego stated. “I thought I had enough to get by Billy at the end but he just hung on. Sheppard was just the class of the field tonight, driving by everyone and some people two times.”