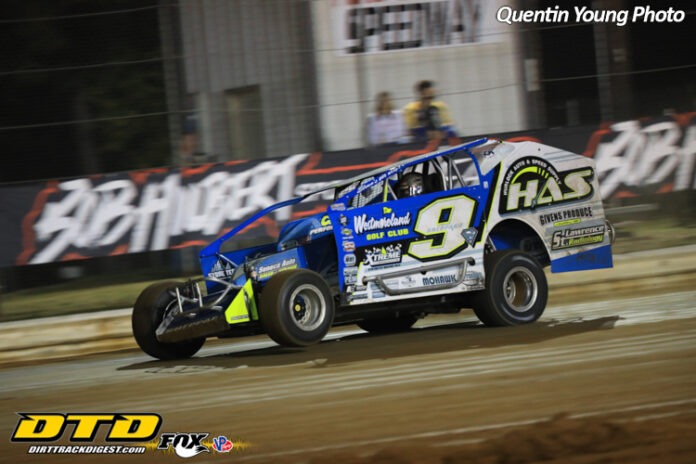 VIVIAN, LA – Other than brief challenges from Mike Gular, it was all Matt Sheppard’s show in the 40-lap Short Track Super Series event. After grabbing the lead early, Sheppard rim-rode around Ark-La-Tex Speedway en route to his second consecutive Louisiana win.

Sheppard drove under John Willman and Jeff Strunk on a lap two restart to jump out front of the 23-car field, with Gular sliding by teammate Strunk to nab second on lap eight. Sheppard had migrated to the far top of the race surface by this time, with Gular looking anywhere Sheppard wasn’t. Friesen was marching forward too, reaching third by lap ten.

A set of mid-race yellows kept Gular close to Sheppard, with Friesen close to Gular. On each restart, Gular would take a swing at Sheppard, but the momentum around the cushion kept Sheppard out front. On lap 29, Friesen took a dip to the pits with a flat left rear tire, restarting at the end of the lead lap cars.

As the race wore on, Gular couldn’t stick with Sheppard like he could earlier. Friesen was on a tear, driving by cars top and bottom while heading back to the front. Speaking of the front, Sheppard was all alone up there, storming off to reach the checkered flag first and scoring the opening win of the week. Gular came home second, with Friesen reaching third by the finish. Strunk nailed down fourth, while Jack Lehner grabbed fifth.

“I just felt way better up top,” Sheppard said. “It was getting higher and higher, thankfully we got to the end before I ran out of track because we were almost there. I got a better launch up top at speed, but fired better on the bottom on restarts and that’s what allowed us to get by everyone at the start. This engine runs good and this car hooked up great, and a fun track allowed us to show it.”

Gular seemed to be the only car capable of taking down Sheppard during the middle portions of the race, but ultimately lost touch of the #9s in the late stages.

“I was just trying to make the bottom work because I wasn’t going to get by him up top with how high he was,” noted Gular. “I’m excited for another night here, the track was real racy. The lapped cars were interesting, we don’t know these guys so we don’t know what they do or where they’re going. However, I’m happy with a second to start our week.”

Friesen lost a tire running third, but charged back to finish third in 11 laps. Given the pit stop, Friesen certainly had lots of experience passing cars.

“We kind of ran out of laps,” Friesen stated. “We had a great long run car, but we had a UFO encounter out there and got a flat. I’m probably not allowed to talk about that one with the government watching us and all.”

VIVIAN, LA – Matt Sheppard capitalized on an early-race restart, launching from third to the lead to capture the opening night victory of the historic ‘Cajun Swing’ worth $4,000 at Ark-La-Tex Speedway.

The triumph is Sheppard’s 13th overall and second in as many races in Bob Hilbert Sportswear Short Track Super Series Fueled By Sunoco competition, coming less than two weeks after his win at Georgetown (Del.) Speedway as part of the Mid-Atlantic Championship Weekend.

“Man, it’s awesome to be down here in Louisiana,” Sheppard announced in Victory Lane. “What a racetrack we had tonight and it’s nice to start the week with a win.”

The Savannah, N.Y., resident redrew fourth after running away with the night’s first heat but snatched the lead on just the second lap after a pair of early cautions. With just one lap in, Sheppard was shot out of a cannon from third and tiptoed around the bottom to take the lead out of turn two. After securing the lead, “Super Matt” went to the top shelf and used the very outside of a racy track on Wednesday night to lead the ensuing 39 laps.

“I had a better launch off turn four on the bottom, but I definitely wanted to race up top,” Sheppard said of his decision to choose the bottom immediately after cautions. “This engine runs so good and the car was so hooked up on the restarts, I wanted to restart on the bottom and race up top.”

Despite a dominating effort, Sheppard did defend a slew of charges from second-place finishing Mike Gular. From the eighth-starting spot, Gular advanced to third by lap six and moved into the runner-up position on the seventh circuit, using the bottom to pass ‘Cajun Swing’ teammate Jeff Strunk.

“I was really trying to make the bottom work,” Gular explained. “This is a good track down here, real racy, and I’m excited for another night.”

Just after the midway point of the 40-lap feature event, the top-three entered hectic lapped traffic as Gular and Friesen both closed on Sheppard. On lap 27, Friesen, of Sprakers, N.Y., surged to the outside for second, but Gular used lappers to his advantage and fended off his challenges by sticking to the bottom.

“Lapped traffic was definitely tough,” Gular said. “Just racing with people you don’t know or aren’t familiar with is a different challenge.”

Just two laps later, though, the caution flew again, this time for a left-rear flat on the Halmar International-sponsored No. 44, forcing Friesen pit side with just 11 laps to go.

Once more, Sheppard led Gular on the restart with Strunk passing Lehner for third and Modified rookie Derrick McGrew Jr. rounding out the top five. As the top three separated from the field, Lehner, McGrew Jr. and Willman danced for position before McGrew Jr. slowed with just eight circuits remaining.

On the ensuing restart, Lehner passed Willman back for fourth and then, after changing a tire and coming from the back, Friesen bolted back inside the top five. The recently-crowned STSS South Region Champion, Friesen bashed the outside curb around Willman for fifth with just six laps left, dispatched of Lehner while the flagman held up five fingers and finally moved around Strunk for third on the final lap.

“We had a really good car tonight,” Friesen said of his third-place finish. “We were really good on the longer runs but we just ran out of laps at the end.

Strunk capped the night in fourth while Lehner rounded out the top five. Finishing sixth through 10th were: Willman; front row-starting Caleb Dillard, who spent the entirety of the night bouncing around the top eight; Jeff Heotzler, Dave Rauscher, who rebounded after going to the rear three times; and Greg Dillard.

The Bob Hilbert Sportswear Short Track Super Series Fueled by Sunoco is back at Ark-La-Tex Speedway on Thursday night for a 50-lap feature paying $5,000 to the winner before moving to Chatham Speedway on Friday and Saturday, culminating in a $20,000-to-win main event.