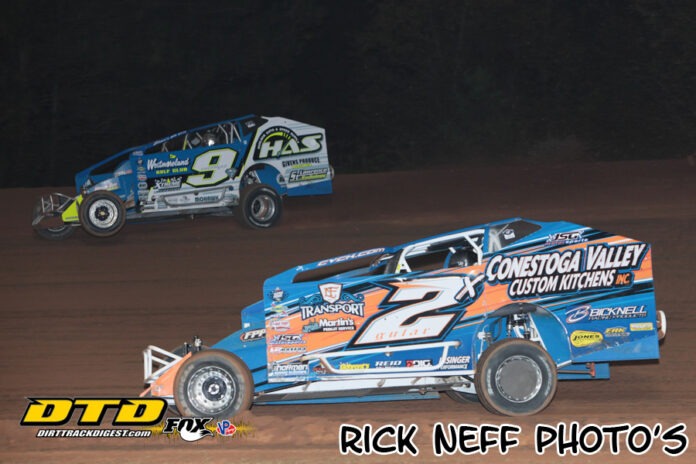 VIVIAN, LA – Matt Sheppard snagged the lead from Jeff Strunk early in the 50-lap Short Track Super Series feature at Ark-La-Tex Speedway, driving off uncontested for his second win in as many nights. The sweep of the two shows nets Sheppard $9,000 heading into the remaining two nights at Chatham Speedway.

Teammates Mike Gular and Strunk swapped the lead in the opening circuits of the 50-lap feature, as Strunk secured the lead by lap four. A lap later, Sheppard slid under Gular, working into second and marching in on Strunk. Sheppard spent some time searching, playing with different lines to find a route by Strunk. On lap 13, Sheppard drove by Strunk up top, moved back to the bottom, and took off.

Strunk was all alone in second, distancing himself over the battle for third between Jack Lehner, Gular, and Stewart Friesen. Out front, Sheppard was walking away, and half a track behind him, Friesen worked by Gular and Lehner to grab third shortly after halfway.

Sheppard worked traffic with ease, continuing to pull on Strunk. Friesen closed in on Strunk, slipping by him on the last lap, but half a lap ahead, Sheppard was taking the checkered flag for his second win in a row. Friesen crossed the line a distant second, with Strunk, Lehner, and Gular.

“I like these Louisiana tracks, I wouldn’t mind moving down here,” Sheppard said. “This state has been real good to me, the tracks are fun and racy. Opposite of last night, I stayed pretty hooked to the bottom tonight, just tried to be patient and work traffic. Sometimes when you’re leading you want to see cautions, but this place is a rhythm track so I would have rather been in traffic than deal with restarts.”

One spot better than last night, but further behind in terms of time was Friesen. No flats tonight, Friesen’s 50-lap race was certainly less eventful than last night’s 40.

“This place is definitely a lot of fun, and a lot of traffic out there,” noted Friesen. “Every time I seemed to get a run on someone, I got boxed in with traffic and had to settle back in line. I wish we could’ve gotten a win here, but it was fun running out there the last couple nights.”

Strunk upped his finish from last night as well, improving on his fifth with a podium finish. Even then, Strunk wasn’t totally satisfied.

“I definitely stayed hooked to the bottom since I saw them go out there with the grader and push the berm in a little,” Strunk stated. “It sucks to lead a race and not win it, but I’ll still take a third. It’s a good payday, but not as nice as what could’ve been, but even then, happy to get it for my car owners this week. It’s a solid base we can build off of the next two nights.”

The “Cajun Swing” continues on Friday and Saturday night, culminating in a $20,000-to-win ‘Mods in the Marsh 75’ feature event at Chatham. STSS Modifieds will run Qualifying Events on Friday in addition to all of the track’s weekly divisions.