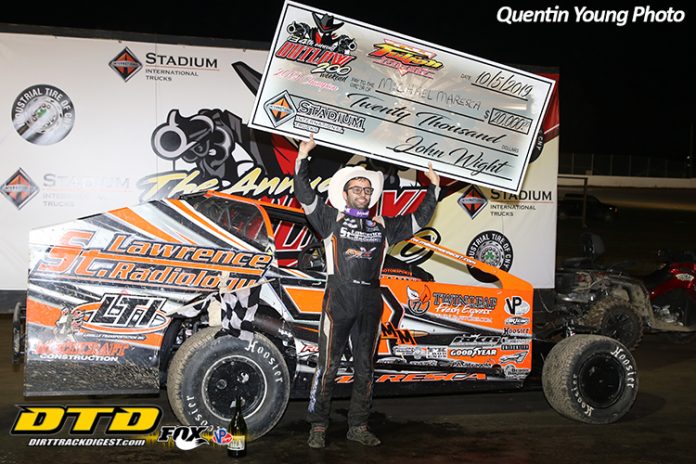 OCALA, FL – History will be made when the Bob Hilbert Sportswear Short Track Super Series (STSS) Fueled By Sunoco hits the track at Bubba Raceway Park in late January.

North Country driver Mike Maresca and Delaware car owner Gary Simpson will be part of it – together.

Maresca will make his debut in Simpson’s No. 12K at Bubba Raceway Park during the Jan. 26-30 ‘Sunshine Swing’ launching a partnership that is expected to continue throughout the 2021 STSS Velocita-USA South Region presented by Design for Vision and Sunglass Central.

The Harrington, Del.-based Simpson team has partnered with Maresca for the STSS series of South Region events in 2021. The new combination will get in some ‘pre-season’ racing on Florida soil in Ocala in the first-time appearance by the Modifieds at Bubba Raceway Park.

Following a practice on Tuesday (Jan. 26), four nights of racing are planned, starting at $4,000 and increasing to $8,000 to win from Wednesday to Saturday.

A brand-new DKM mount is under construction at the Hagaman, N.Y.-based chassis shop. A freshened Pro Power engine will be installed between the frame rails for the upcoming season.

“The car will be built, engine put in, lettered and finished up at DKM,” Simpson said of Maresca’s ride. “We’ll pick it up from there and head to Florida.”

The ‘next-generation’ No. 12K will be outfitted with a four-link suspension to match Simpson’s other DKM mount, which was recently driven to a runner-up finish by Anthony Perrego in the Georgetown (Del.) Speedway ‘Gobbler’ event.

“We’re building another four-link,” Simpson said. “Mike is familiar with the Late Models (which utilize a similar suspension). Our car was right there at the end of the year.

First State star Ricky Elliott, who has stepped away from regular driving duties, has been instrumental to Simpson’s efforts in the last year and brings his knowledge of four-link technology to the operation.

At the end of the season, Maresca picked up wins outside his home turf on back-to-back November weekends at Bridgeport (N.J.) Motorsports Park and BAPS Motor Speedway in Newberrytown, Pa.

The arrangement allows Maresca the opportunity to compete in STSS South Region races held six hours or more away from his residence.

Camping will be permitted on-site throughout the swing free of charge (no hook-ups).

Bubba Raceway Park is a three-eighths-mile facility with a history of racing dating back to 1952 as both a pavement and dirt track. The speedway was converted back to a clay surface in 2008 and an overhaul was completed to include MUSCO lighting, a new sound system, modern restrooms, and a reworked pit area.

The speedway was resurfaced with 60 loads of clay in preparation for the upcoming Speedweek events.