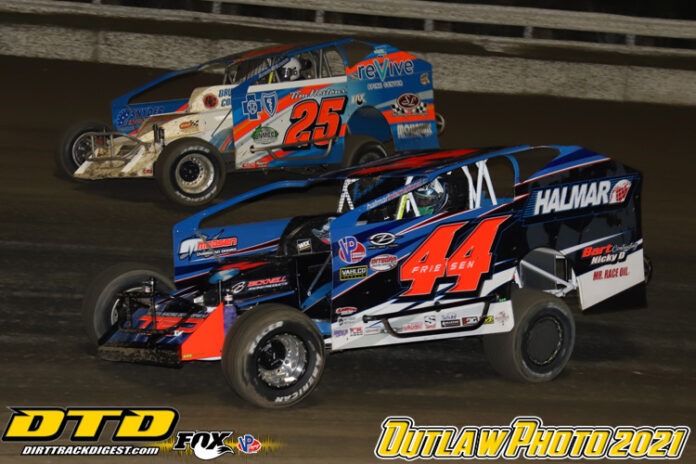 OCALA, FL – Erick Rudolph started on the pole and won the Short Track Super Series race at Bubba Raceway Park. Sounds potentially uneventful, right? Wrong. Following a lap one red flag, Rudolph and Stewart Friesen went to war for 35 straight laps, with Rudolph coming out on top of the see-saw battle with Matt Sheppard nearly spoiling their party at the end.

It was Rudolph over Sheppard and Friesen at the start of the 35-lap feature, with Friesen quickly disposing of Sheppard and then Rudolph to lead lap five. As fast as Friesen got the lead, Rudolph took it back even quicker, driving around the top of Friesen to grab the top spot again. Once Rudolph solidified his status up front, he held Friesen at bay at a consistent three-quarter second gap through lap 15.

In an instant, Rudolph’s advantage was gone. For a second time, Friesen slipped under Rudolph to steal the lead, this time on lap 17. Rudolph couldn’t counterattack like prior, but wasn’t letting Friesen get any further than a few car lengths out front. By this point, the leaders were thick in lapped traffic, with Friesen and traffic on the bottom. This forced Rudolph up top, and proved to be a blessing in disguise. Putting a lapped car in the middle, Rudolph went up top and three wide to take the lead on lap 26, his third stint up front.

Things were far from over, as Rudolph bobbled on the cushion with 28 laps down, and Friesen once again cleared Rudolph for first. Driving down the track, Rudolph got a massive run and crossed under Friesen, stealing the lead back for another change atop the scoreboard. Meanwhile, Sheppard was catching both of them.

With five to go, Sheppard drove by Friesen, but Rudolph had already opened up a second and a half cushion. In the final laps, Sheppard ate away at Rudolph’s lead rapidly, but too little and too late, and Rudolph reached the checkered flag first to score the win in the first ever Northeast Modified feature at Bubba Raceway Park. Sheppard finished second, with Friesen, Max McLaughlin, and Mike Maresca completing the top five.

Post-race, Rudolph echoed a common feeling shared among all drivers: nobody had any clue what tonight would bring.

“Everyone seemed to have the same thought going into this, where nobody knew what to expect,” Rudolph said. “Even starting on the pole I had no idea where to even take the first corner. We race so often at the places we do back home that it’s much more predictable as to what you’ll see during the night, but tonight was just a tossup. I got passed, tried to learn from it and figure out what to do to get them back, and repeated the process when I got passed in traffic.”

Sheppard fell to roughly three seconds behind Rudolph during the middle portions of the race, but a late charge meant the margin of victory was only .641 of a second. Like Rudolph, Sheppard felt the race played out a little weird.

“There was a little bit of everything out there tonight,” Sheppard noted. “I was struggling for a while but watched those leaders going back and forth, then next thing we know we’re up front too. I didn’t really know what to expect with the track and we were good at the end, but I’m not completely sure what to do with that info.”

“This place raced just like the other Florida tracks,” said Friesen. “It’s crazy, one lap you’ll be hooked up and go, and the next lap you’ll be sliding. I don’t know if it’s just because of where people are running on track, the humidity, or what, but it changes like a light switch every other lap, it’s very unpredictable.”

The Short Track Super Series still has two more nights at Bubba Raceway Park. Both races, 40 laps on Friday and 50 on Saturday, are available for purchase on Dirt Track Digest TV.