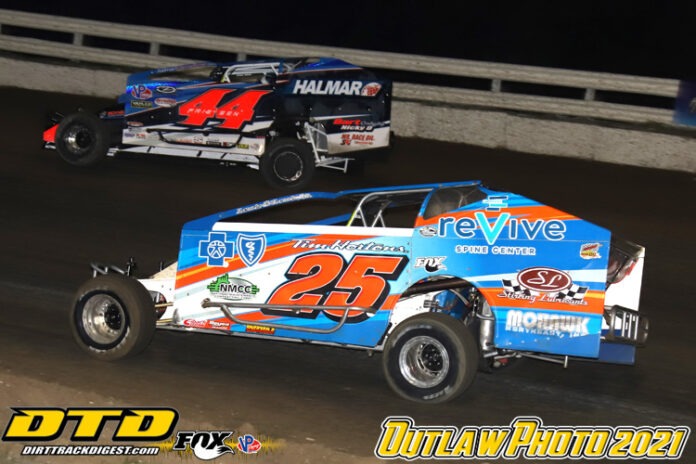 OCALA, FL – Thursday night saw Erick Rudolph and Stewart Friesen participate in an all-out slugfest for the Short Track Super Series win at Bubba Raceway Park. On Friday night, the two fought once more, with Friesen coming out victorious after another race-long battle with Rudolph. In an opposite scenario from yesterday, Friesen took the lead from Rudolph late in the 40-lap event for the $6,000 victory.

A third-to-first move on the initial start put Billy Pauch Jr. in the early lead, with Rudolph slipping into second. Pauch held tough through some early restarts, but on lap nine, Rudolph pried his way under Pauch to take the top spot. Maresca followed through for second, and Pauch’s fun ended there, as Pauch got crossed up and fell out of the top five.

Friesen was making ground during all this, blasting the top and getting to second before a lap 12 yellow. Once racing resumed, Rudolph and Friesen went to battle, a continuation of Thursday night. With Friesen high and Rudolph low, Friesen took the lead just prior to a lap 16 yellow. Rudolph tossed a pair of sliders on the restart, but Friesen was able to respond to both and keep his car in first. Another yellow on lap 27 saw Friesen get an awful restart, allowing Rudolph to regain the top spot. Friesen remained locked to Rudolph, while Maresca battled David Schilling and Billy Decker for third.

A lap 33 caution gave Friesen another swing at Rudolph, barely nipping Rudolph at the line before another yellow the next time by. This pass counted, meaning Friesen was in control of the coming restart. With Friesen up top, Rudolph kept trying down low. While Rudolph stayed within striking distance, Friesen was consistent up top, enough to keep Rudolph at bay.

A pair of yellows with three and two laps left gave Rudolph a final shot, but Rudolph pushed up the track and surrendered second to Maresca. At the checkered, it was Friesen winning over Maresca, Rudolph, Max McLaughlin, and Decker.

“It’s definitely a big time unique race track,” Friesen said. “It moved all over tonight, there was grip up top in two that wasn’t there last night. The track was definitely a little wider than last night too. The key tonight was all the restarts, I just needed to make sure my tires were clean and not blow them off in the greasy slick. The restarts and cautions fell where we needed late and we were able to get the win.”

Maresca backed up his solid fifth from Thursday with a runner-up on Friday. Maresca’s new team seems to be mixing well together, as the group has ran strong on both nights. Maresca had less cars to pass tonight, starting 12th on Friday rather than 18th on Thursday.

“A lot of what we did yesterday was still relevant today,” Maresca said. “Luckily we had a pretty similar racetrack to what we had yesterday, it just cleaned off a little more and got some different lanes. The track was definitely more dynamic tonight, it moved around more than Thursday.”

“I’m not sure what I could’ve done differently behind the wheel,” noted Rudolph. “I needed a little more from the car, I felt like I had no control over the car in the black from the exit of turn two to the entry of three. Some stuff just didn’t go our way when we needed it, like Friesen barely beating us to the line and the yellow coming out. Overall, still a positive night.”

The Short Track Super Series has one final race at Bubba Raceway Park on Saturday night. $8,000 awaits the winner of the 50-lap main, with all action available on Dirt Track Digest TV.