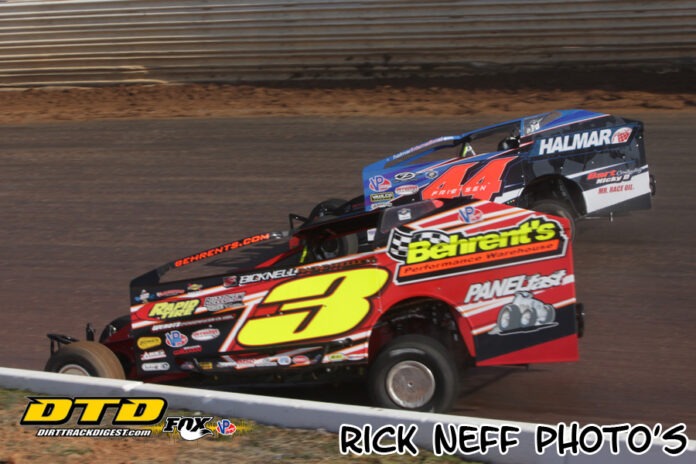 After Sunday evening’s performance, I think you could say Williamson wishes the series visited ‘The Speed Palace’ more often. Williamson capitalized on Stewart Friesen’s slip up in lapped traffic to score the Spring Speed Showcase victory worth $5000. 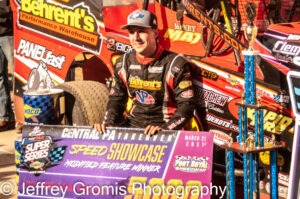 “I really think Stewart had a better car, but sometimes it’s better not to be in first and to be able to capitalize on their struggles,” said Williamson. “I know these guys are good and I keep hearing how good Stewart is and it stinks when you’re sitting at home watching. It makes you feel a bit underappreciated and now we got a few of these big races and maybe we can put our name up there with them.”

It was a husband and wife front row as both Jessica and Stewart Friesen led the field to the green flag with Stewart getting the quick jump from the outside line to lead the opening circuit. One lap later Williamson, who started eighth on the grid, moved inside the top five and he took fourth coming to the line.

Glued to the bottom of the speedway, Williamson moved into the runner up spot three laps later and he set his sights on Friesen. Meanwhile sixth-place starter Mahaney was the lone wolf on the outside as he was ripping the lip and was up to fourth.

Friesen caught the tail end of the field on lap ten and by lap 15, Williamson was within two car lengths as the two headed down the backstretch. The two drivers dove in and out of the lappers for the next three circuits before the caution came out for Anthony Perrego, who blew an engine coming into turn one.

Friesen again jumped out to the advantage after the return to green flag action, while Mahaney continued his march forward by using the outside of the track to move into third just before the halfway point.

With 14 laps remaining Friesen again hit lapped traffic and within two laps Williamson was working his bumper looking for a slip up. Williamson tried the middle of the track in turn’s one and two on lap 29 while Mahaney ripped the lip, but neither could make the pass.

However, the attempt forced Friesen to get aggressive the following circuit in lapped traffic and opened the door for Williamson to get under the leader exiting turn two to lead lap 30.

“It felt like ice out there and I knew I had to stay on the bottom,” said Williamson. “I saw Mike (Mahaney) go up there too and it probably ruined his chances too, but luckily Stewart opened the door for us and we could sneak by.”

The final caution would fall two laps later when a pair of cars came to a slow on the track. Friesen tried to use the top of the track entering turn one and two on the restart, but Williamson was able to pull away. The move also opened the door for Mahaney to drive into the runner up position.

Williamson went untouched the remaining seven circuits and he crossed under the checkers by 2.271 seconds for the win. Tyler Dippel, Matt Stangle, Max Mclaughlin, Ryan Godown and Billy Decker rounded out the top ten.

“I’ve just to thank everybody who came down here with us as it’s a long way from home for a lot of us and it’s great to bring home another win,” said Williamson. “I’m not sure that we had the best car, but ultimately we capitalized when we needed to. We’ll take these wins when we can get them.”

For Mahaney he thought he had maybe the best car for the first 30 laps, but the late caution stalled his momentum.

“The lapped traffic was really playing into our favor out there, but that caution came at the wrong time and really hurt us,” said Mahaney. “We were three ride there and I was ready to put a show on for the fans or put it in the fence trying. This is one of the best tracks to come to and I can’t wait for the next night show.”

While happy about the front row draw he received earlier in the night, Friesen felt like being out front and lapped traffic was ultimately his downfall.

“I guess it’s the kiss of death for drawing so good,” said Friesen. “Matt tried to roll us on the top and I snuck back by and I just lost my head and got impatient with a lap car. Congrats to those guys and I appreciate Port Royal having the series here.”

Gregg Satterlee continued his recent domination of the Port Royal Speedway as he picked up the $4000 to win Zimmer’s Service Center ULMS Racing Series late model feature win over Jeff Rine. The win made for a clean sweep of the weekend for Satterlee and was his 11th career triumph at the ‘Speed Palace’.

” A lot of things fell our way and we were able to cruise to the front,” said Satterlee. “The feature today was a little different then last night. It was pretty much one lane, but we were able to take advantage of a few restarts and just cruise.”

Michael Norris and Max Blair led the field the green flag and Norris got the jump to lead lap one. Meanwhile Satterlee was on the move as he went from sixth to fourth on the opening circuit. One lap later he used the bottom to take third.

Two laps later Satterlee and Rick Eckert made contact on the backstretch, sending Eckert spinning to the inside guardrail to bring out the first caution of the race.

“We made contact and I was trying to get back to the rubber and I certainly didn’t mean to crash him. You cant see left out of these cars,” said Satterlee. “I was going left and he was going right and we just made contact. I’m sure I’ll talk to him later and apologize, but it just sort of happened.”

With the series utilizing Delaware restarts, Satterlee moved into the runner up spot on the restart form the top of the track. He was then able to pull alongside the leader entering turn three and used the momentum to take the point and lead lap five. Norris drove up the racetrack trying to battle back and opened the door for Jeff Rine to move into the runner-up spot.

Despite a scare when a lapped cars spun out right in front of Satterlee in turn one, Satterlee was able to go untouched for the rest of the feature. He took the checkered flag by a margin of 3.947 seconds over Rine, Norris, Dylan Yoder and Donnie Lingo.

“I just needed to manage my tires as well as I could and just kind of ride it out,” said Satterlee. “It looked like it got kind of one lane and took rubber and was bottom dominant during the modified race. But for starting in the day, the track gave us great racing and kudos to Port Royal for giving us a great surface.”

For Rine, he was happy with his run and content with being on the podium.

“The race track was kind of one lane there around the bottom, but I think we did pretty good out there,” said Rine. “The bottom was ripped up so good that I was able to get alongside Gregg once, but he’s just so good here and we were probably a second place car honestly.”