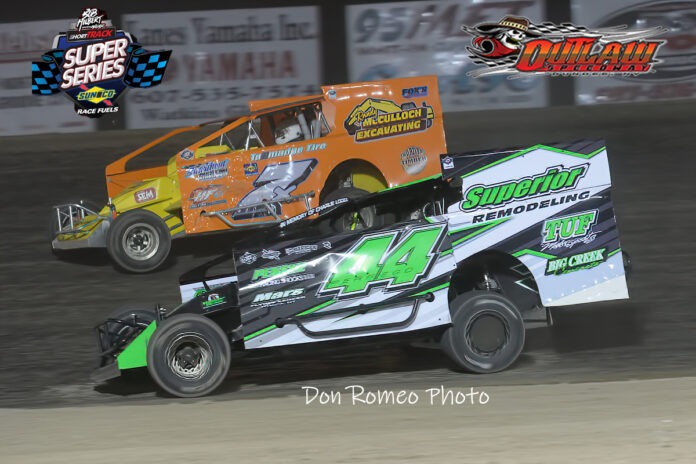 DUNDEE, NY – When I talked to Steve Paine earlier this year, there was evident excitement brewing in his pits. It was not just the feeling of a new season, but many exciting new things happened in the offseason for Steve and his sons Billy and Tommy. New cars, new parts, new bodies, and a general sense of optimism that was present in the pit of the D.I.R.T. Hall of Famer.

While Paine led flag-to-flag, the race was not a dominant affair. From the drop of the green flag, Paine saw many challenges for the lead. Erick Rudolph was the first to look on the top side, but he’d be quickly shuffled back as Anthony Perrego inherited second place. Perrego never passed Paine, but it was not for a lack of effort. Perrego’s No. 44 machine danced all over the racetrack, trying to find a lane past Paine.

The race for the lead centered around lap traffic. Whoever cleared the traffic the quickest was certain to win the race. Traffic at the Outlaw Speedway came as thick as it did quick. Perrego reeled Paine in as Paine’s orange No. 7x sliced and diced his way through the back of the pack.

Perrego, however, was often be left feeling like he was out fishing; as soon as he reeled Paine in and look certain to land the lead, Paine ran right back away when the traffic cleared.

This dynamic dominated most of the race until, with about 10 laps to go, Mike Mahaney threw his hat in the ring. With Stewart Friesen and Matt Sheppard lurking a few car lengths behind, Mahaney made a move to the middle of the Outlaw Speedway racing groove that was instantly rewarding.

He made his way into second, but Perrego was not going to let Mahaney clear. Perrego stayed under Mahaney as they both caught back up to Paine in lapped traffic. As the white flag flew, Paine negotiated lap cars with caution as Mahaney and Perrego almost made it three wide as the trio exited turn two.

By turn three however, Paine had pulled about three car lengths on what quickly became the battle for second.  Paine took the flag-to-flag victory.

In the battle for second, Mahaney successful danced his way around Perrego to take second at the line. Stewart Friesen and Matt Sheppard followed the duo home to round out the top five.

Paine’s victory was a very popular win with the Outlaw Speedway crowd; it was evident all night long. The crowd went wild as Paine drew the pole for the 50-lap main event and the crowd reacted even more when Paine climbed out in victory lane to celebrate his victory.

“We’ve tried some things the past two weeks,” said Paine post-race. “We’ve been getting a little better with each change. Tonight, we found something I really like. We drew good for the heat and drew good for the feature; everything just went good.

“I didn’t really see anybody all night,” said Paine. “One time, I saw a black car dive underneath me. I would hear people while I was in lapped traffic, but once I cleared the lap car, I wouldn’t hear them again. After the checkered flag, I saw Mike there. I wasn’t sure if it was the checkered flag, but I was pretty sure.”

Paine added, “Lapped traffic was interesting tonight.  “Some of the guys I just couldn’t run down. Then, I would suddenly get a big run and drive right by them. The car was good everywhere, so it really wasn’t a big struggle.

Paine then discussed the effect of the victory on his team.

“It really helps out.  It helps the money, the morale, and everything else out. You get to questioning whether you want to run or even be here, but then you go and run like that and you never do not want to be here”.

Mahaney has been incredibly close to breaking through with a win in the Short Track Super Series, the Super DIRTCar Series, and practically any other major race Mike has raced in as of late. While he has not come away with a trophy yet, he has been one of, if not the most consistent driver in the field.

“We had a pretty versatile car, but I didn’t really utilize it right until the last few laps,” said Mahaney. “Trophies don’t pay the bills, the money does. Consistently running up front has been huge for us getting what we need to keep the success going. Our sponsors in Adirondack Auto, Tony Monaco Landscaping, Huttig Nissan, and Marcella’s Appliance Center do so much to keep us competitive.

“I’m really happy for Steve Paine winning tonight,” added Mahaney. “He’s a legend, it’s awesome to see him still winning. I grew up racing with him here. He was the man to beat then, and still is now.”

Perrego was the main threat to Paine all night, but Mahaney’s late charge saw the Battle of the Bullring winner slip back to third place, which continues a very successful streak Perrego has had in 2021.

“I tried working the top side, but Steve just kept picking off the lapped cars,”  said Perrego. “Mahaney did a really good job. I feel like me and Steve got choked down on the bottom, and he was making the top work in traffic. I feel like that’s where a lack of experience at this place hurt me a bit.”

Although not a win, Perrego was happy to be on the podium.

“I’m happy to get another top 3”, said Perrego. “We’ve unloaded fast everywhere we go. We just have to keep on rolling.”

The Short Track Super Series North Region returns on May 30th, for the Clash at the Can at Penn-Can Speedway. The South region returns in less than a week at New Egypt Speedway on May 25th for the Dirty Jersey event.