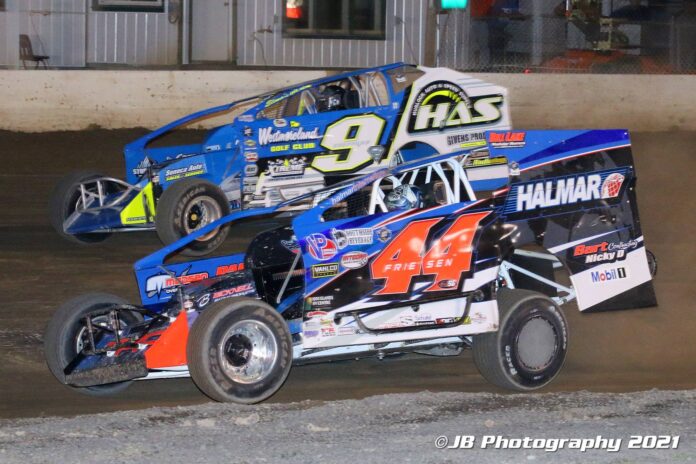 FONDA, NY- When people talk about a performance for the ages, we will remember the 4th of July race at Fonda in 2021. Stewart Friesen is in a league of his own. He steamrolled the field with such ease, making a $10,000 payday look easy. He’s now won this event for the 3rd consecutive year in a row.

Matt Sheppard and Rocky Warner shared the outside and pole positions respectively leading the field to the green. Sheppard got the early jump and set the pace early with Warner settling in for second. It took only 5-laps for Sheppard to get his first taste of lap traffic while putting distance over the 1j of Warner.

A lap later the field slowed for the first of several cautions in a row. When the field finally went back to work on lap 7, Friesen overtook Sheppard for the lead and that was the last the field was able to see of Friesen with the exception of the rear bumper. A series of caution flags on laps 14, and again on 15 restacked the field. On each ensuing restart, Friesen would just drive away from the field with ease. With 18 laps into the books, Billy Decker, driving the JSR 91 Bicknell started to make his run to the front. He passed Warner for 3rd and was beginning his trek to the front. Warner didn’t just roll over for Decker though.

Warner retook the 3rd place back and began to put pressure on the Sheppard 9s. Warner took over second on lap 27 sending Sheppard back to 3rd and Decker into 4th. Warner’s night would come to an abrupt end on lap 30 when a part broke on his Bicknell sending him pitside for the remainder of the night. Once again it was back to work for Friesen as the leader and once again he would outpace the field with ease. The caution would come out for the final time on lap 41 when Mat Williamson hit the wall with the right side of his Behrents sponsored 3. This caused sparks to fly causing the 44 of Perrego to check up which in return caused Tyler Dippel to hit the 44 and bring out the yellow.

With 42 laps in, Decker reeled in the 9s and took over second place. By then it was too late for Decker to catch the 44 of Friesen. Friesen was nearly a full straightaway ahead as he took the checkered flag and the $10,000 payday.

Rocky Warner felt that going into the night he was under powered and was hopeful that the track would slow down some and allow them to race more. Warner was using a small 360cid engine versus some teams with bigger cubic inch engines. Warner also wanted to clear up the air a little on his switch from Teo to Bicknell earlier this year.

“We had a slew of stellar 10th place finishes,” said a smiling Warner. “We already had this Bicknell in our shop in the early spring late winter. It wasn’t together yet. We felt that we needed to do something to change up our racing. We weren’t getting the results that Jake expects us to get. He provides me with everything to win and when you run in the mid pack you start to get that feeling in your stomach that your time is running out with Jake.”

Looking Good- Jake Spraker is looking a lot thinner these days. He reports that he’s down nearly 50lbs.

No sail panels for Sheppard – Sheppard was the only car in the feature that didn’t utilize sail panels. Why not? “When I use sail panels I usually suck,” said Sheppard after being interviewed for his 3rd place finish.

Ronnie Johnson had to take a track provisional to make the feature. He pulled in with 12-laps on the board after not making any significant progress in the feature. RJ will run the remainder of the Fonda schedule and the Albany-Saratoga schedule for the 21 season. He’s not entertaining any ideas of going to Oswego again this year.

“The race doesn’t excite me as much as the Mile did.”

He’s tossing the idea around about Eastern States but was non committal at this time. RJ also was recently interviewed by former Daily Gazette 4th Turn columnist Tom Bogie. You can read that interview here http://albany-saratogaspeedway.com/the-4th-turn-july-1-2021/

Stewart Friesen and wife his wife Jessica will leave from Ransomville on Tuesday after the Super DIRTcar Series race and head to Knoxville Iowa for the Camping World Truck Series race. In the spring Jessica attempted to make the show at Bristol but rain canceled qualifying and she didn’t make the show.

A few weeks ago, Fox Sports aired a feature story on the Friesen’s and their son Parker and his battle with Autism.

“We had no idea how it was going to air,” said Jessica. “When it aired we were floored with how well it turned out. We have gotten so much positive feedback from that its been a little overwhelming.” 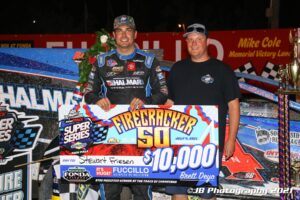