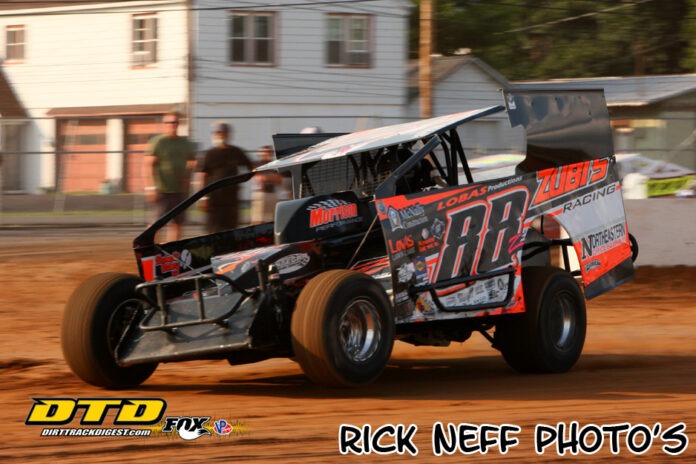 BLOOMSBURG, PA – Bring on the rain.

Strunk’s only previous STSS triumph came more than three years ago on April 29, 2018 at Bridgeport (N.J.) Speedway’s then three-eighths mile. That was the first and only event on Bridgeport’s inner oval.

This time, the ‘Bechtelsville Bullet’ tamed Round No. 5 of the of the Hurlock Auto & Speed North Region at the three-eighths mile at Bloomsburg Fair Raceway in the rain shortened ‘Battle at Bloomsburg.’

The win pocketed Strunk $5,475 for his efforts, and bragging rights as the first-ever Modified winner at Bloomsburg after 29 of the race’s scheduled 50 laps.

Only three times in the 112-race history of the Short Track Super Series has a Modified event been shortened by rain, with Bloomsburg joining June 19, 2019 at Outlaw Speedway in Dundee, N.Y., and May 29, 2016 at Thunder Mountain Speedway in Center Lisle, N.Y.

Strunk started on the outside of the front row, with North Region co-point leader Anthony Perrego occupying the pole starting position.

At the drop of the green flag, Strunk used the outside lane to drive off turn two and beat Perrego into the third turn, claiming the early lead.

On lap 11, the leaders had officially caught the tail end of the field. Strunk’s scant lead shrank even more as Perrego dove underneath the Zubi’s Racing No. 88z multiple times, as Strunk tried to make the top work to get around the traffic.

While the two battled, Bachetti quickly made-up ground, preparing to challenge the top two. However, coming to complete lap 14, Jared Umbenhauer appeared to slow off the fourth turn, and was tagged by Strunk, bringing out the race’s first yellow.

On the restart, Bachetti used the inside line to his advantage, jumping underneath Perrego and stealing second away. A few short laps later, Perrego retook the second position back and set his sights on Strunk.

On lap 21, Strunk was back in slower traffic. This time, the Bechtelsville, Pa., native had some breathing room between himself and second place, and he carved his way through multiple cars.

On lap 29, rain began to fall on the backstretch, prompting series officials to throw the yellow flag.

The rain intensified, soaking the track and forcing the checkered flag to be thrown handing Strunk and his Pennsylvania-legal spec small-block-powered ride the victory.

Perrego finished runner-up, reclaiming the North Region point lead in the Brian Smith-owned No. 44. Mahaney rebounded from a tough night at Fonda (N.Y.) Speedway on July 4, finishing third in his George Huttig-owned No. 35.

The other North Region co-point leader entering the night, Sheppard grabbed the fourth position in the Hurlock Auto & Speed No. 9s. and Branchburg, N.J.’s Ryan Krachun rounded out the top-five in his family-owned No. 29.

Wind Gap, Pa.’s Frank Cozze brought his Dave Renaldo-owned No. 401 home sixth, with Frenchtown, N.J.’s Billy Pauch Jr. grabbing the seventh position. Andy Bachetti faded after being hung up on the outside, finishing eighth in the Garrity Asphalt Reclamation No. 4. Garden State driver Billy Osmun came home in ninth and Mooresville, N.C.’s Max McLaughlin rounded out the top-10 with the Norm Hansell No. 357.

Heat winners, receiving $50 each from FloRacing were Bachetti, Perrego, Osmun, Mahaney and Sheppard. The consolation races went to Friesen and Mike Gular.

Forty-five STSS big-block/small-block Modifieds signed in at the gate to participate in the first-ever Modified race at Bloomsburg Fair Raceway.

Fifty-seven Crate 602 Sportsman signed in to participate in Round No. 3 of the Precision Hydraulic & Oil North Region. Unfortunately, the rains forced the cancellation of their feature event.

As a result, the full purse will be split evenly to the 27-car scheduled starting field.

This event marks the first-ever STSS event at the Utica-Rome Speedway.

A complete information sheet has been posted for this event on the STSS website: http://shorttracksuperseries.com/wp-content/uploads/2021/07/RichieEvans61GeneralInfoSheet.pdf