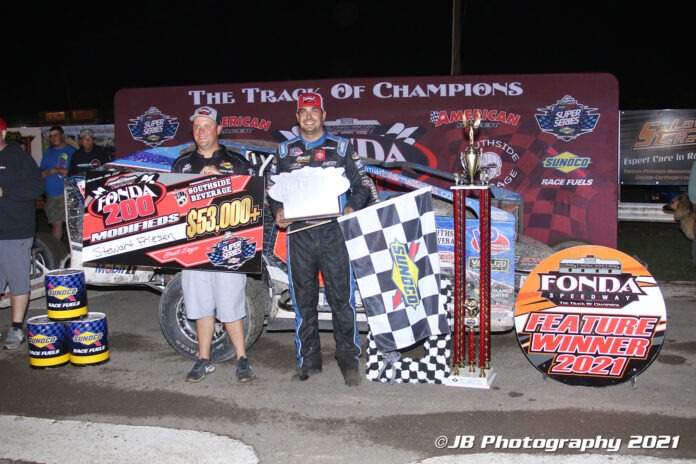 FONDA, NY – Stewart Friesen picked up his second Fonda 200 victory in three years (last years event was postponed due to covid restrictions) on Saturday night, earning himself over $53,000 for his efforts.

Jeff Rockefeller and Danny Varin lead 40 car starting field to the green flag with Varin jumping out to the early race lead.  Varin’s 93 machine was on rails early in the event as he raced out to a large advantage while Stewart Friesen made his way from his 6th starting position into the top 2 on lap 15.

By the 20th circuit the leaders were in heavy lapped traffic and Friesen had closed the gap on Varin but a yellow on lap 24 for Alex Yankowski slowed the field and provided a clean race track for Varin when the field went back to green.

With Varin and Friesen battling for the lead, 9th place starter Mike Mahaney was methodically working his way through the top 10, and broke into the top five on the races 43rd circuit.

As the race it the quarter mark Friesen was again putting pressure on Varin for the lead with Rocky Warner, Mike Mahaney and Ronnie Johnson completing the top five.

Things got interesting on lap 67 when Stewart Friesen shredded a right rear tire while running 2nd.  Friesen pitted for a fresh right rear and brought Mike Mahaney pitside with him, playing some strategy that has worked in previous 200 lap events.

Friesen and Mahaney returned to the field but were mired towards the middle of the pack for the restart.

Only 6 cars chose to not head to the hot pit area to change tires at the race break.  Those cars included Friesen, Delorenzo, Mahaney, Schilling, Gleason and Hohenforst so by virtue of those cars not making any changes at the break, they cycled through to the front of the field.

With Friesen cycling to the lead after the 100 lap break it set the stage for a dominating performance in the second 100.  Friesen jumped out to a huge lead early and was able to maintain the gap back to 2nd place running Mike Mahaney.

18 laps into the second 100 laps the cars that pitted for tires and changes at the race break were starting to make their way through the field with Rocky Warner charging into the 2nd position past Mike Mahaney and set his sights on leader Stewart Friesen.

With 50 laps remaining Friesen had opened up nearly a straightaway lead over Rocky Warner and Tyler Dippel.  Mahaney, who did not pit at the race break had fallen back into the clutches of the drivers who did and was running in the 5th position.

With only 25 to go, Adam McAulliffe made things very interesting in the top five as he found something on the top side of the speedway and charged himself all the way up into the top 5 from his 33rd starting position.  Unfortunately for him a yellow flag slowed his progress and the 234 machine just wasn’t the same.  He did earn the Hard Charger of the race.

When the green flag flew again Mahaney made his charge from the 5th position back into the top 3 as he mounted a challenge for the 2nd spot on Warner, but Warner held strong.

With a clean track in front of him, Friesen cruised to his 2nd consecutive Fonda 200 victory over Rocky Warner and Mike Mahaney.  Ironically, the same top three (in the same order) from the first Fonda 200 two years ago.