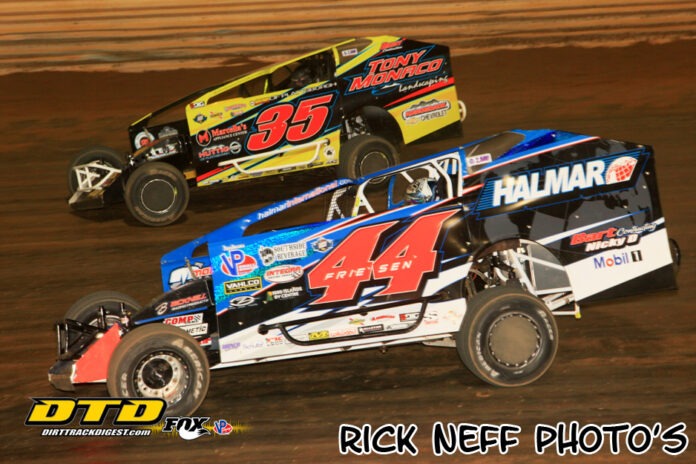 PORT ROYAL, PA – Stewart Friesen dominated the late stages of the Speed Showcase 200 to take home his first career victory at the Port Royal Speedway and a whopping $50,000 paycheck.

Alex Yankowski and Peter Britten lead the 39 car starting field to the green flag with Yankowski jumping out to the early lead.

By the races 8th circuit the leaders were already starting to make their way into lapped traffic, giving Peter Britten a chance to challenge the 84Y of Yankowski for the first time of the event.

While the leaders worked their way through lapped traffic, recently crowned American Racer Cup Champion Stewart Friesen was charging his way through the field after starting in the 16th position.  As the field completed the 15th lap, Friesen had made his way into the 7th position, past Thursday night’s feature winner Mike Mahaney.

With Yankowski stuck in heavy lapped traffic, the 21a of Britten and the 9s of Sheppard closed in on the race leader, with Britten briefly taking the lead after Yankowski gave up the top line on the speedway, but Yankowski was able to battle back to the lead.

As Yankowski and Britten battled for the lead, Matt Sheppard was biding his time on the bottom of the speedway, and drove by both drivers to take the lead on lap 20.

Sheppard had built up a 1 second lead by lap 23 when the first yellow flag of the race flew for the 31 of Ryan Riddle who slowed on the top of the speedway in turns 3 and 4.  When the pits opened, only 3 cars decided to come down pit road, Dominic Buffalino, Kyle Coffey and Sammy Martz.

As the field came back to green on lap 26 it was Matt Sheppard using the momentum on the top side of the speedway to maintain the lead, but Stewart Friesen took full advantage of the field being packed up as he moved himself into the 4th position past Michael Maresca, Billy Pauch Jr and Peter Britten.

The yellow flag flew once again on lap 29 for the 88c of Jared Umbenhauer who slowed on the bottom of turn 4.  Umbenhauer was able to continue but needed to go pitside to change a right front tire.

With the race restarted, it was Friesen again make moves and moving past the 26 of Ryan Godown along with the 7mm of Michael Maresca but the yellow flag quickly flew again for the 30 of Joseph Watson who spun in turn 3.

When the green flag flew Sheppard again jumped out to the lead followed by Yankowski, Friesen, Maresca, Godown and Pauch Jr.

As the race approached the ¼ mark the Behrents 3 piloted by Mat Williamson made his way into the top 10 after falling back to 17th in the early stages of the event.

Just as Friesen caught the 84Y of Yankowski for 2nd the yellow flag flew again, this time for Fonda Speedway Co-Champion Rocky Warner, who slowed to a stop in turn 1.

The race restarted on lap 50 and it again was Sheppard who jumped out to the lead, but behind the top 5, Mat Williamson was continuing his charge towards the front as he battled with Billy Pauch Jr for the 7th position.

On the 65th circuit Stewart Friesen turned up the pressure on the 9s of Matt Sheppard for the lead as the two battled side by side with Sheppard running the middle of the speedway and Friesen running the extreme bottom of the speedway as they approached lapped traffic.  With Friesen working the bottom, Sheppard was able to sue a lapped vehicle as a pick to give himself a little bit of breathing room as the leaders approached lap 75.

As the leaders approached heavy lapped traffic, Friesen made his move on the 9s of Sheppard, going three wide down the backstretch with a Joe Judge in the middle of himself and Sheppard to take the lead.  With the 44 machine clear of Sheppard he began to pull away from Sheppard as he fell into the clutches of Michael Maresca in the 7mm.

The yellow flag few again on lap 78 for the 44 machine of Anthony Perrego who slowed on the frontstretch and pulled off the speedway.

With the race getting close to the halfway break, many drivers chose to come down the hot pit lane in an attempt to cycle through to the front of the field.  Those drivers included Mike Mahaney, Brett Haas, Larry Wight, Ryan Watt, Mike Gular and more.

The green flag flew once again 18 laps from the halfway break and it was Friesen jumping out to the lead with Ryan Godown making his way to the 3rd spot past Maresca.

With just 7 laps remaining before the halfway break, the yellow flag flew once again for an incident involving the 55 of Brett Haas, the 10 of Ryan Susice and the 14W of Ryan Watt in turns 1 and 2.

The race resumed with just 4 laps remaining to the midway break and it was Friesen jumping out ot the lead with Sheppard and Maresca in tow.  Meanwhile further back in the top 10, Brandon Grosso was putting on a show using the extreme top of the speedway to move past the 96 of Billy Pauch Jr and into the 7th position.

With most of the front runners heading to the hot pit area, Larry Wight and Alan Johnson cycled to the front of the field on the restart with Rick Laubach, Matt Stangle and Mike Mahaney completing the top five.   The halfway leaders restarted 13th and 14th respectively.

On the restart it was Larry Wight getting a great jump bringing Rick Laubach and Matt Stangle past Alan Johnson.

With Larry Wight opening up over a 2 second advantage in just 6 laps, the yellow flag flew for Jimmy Horton whose 43 machine slowed in turns 1 and 2.

Stewart Friesen wasted very little time on the restart moving past the 2RJ or Ronnie Johnson and into the 4th position as the race approached lap 110.  Friesen, working the top side of the speedway continued to work his way back to the front and drove around the 14J of Alan Johnson as the field completed lap 113.

On lap 115 Friesen made his way past the 6 of Matt Stangle and began to set his sights on the 99L of Larry Wight, who had jumped out to over a 1 second lead.

20 laps into the second 100 the yellow flag flew again for a slowing Andy Bachetti who came to a stop on the backstretch.

With 123 to go the green flag flew again with Larry Wight jumping out to the lead.  Behind the leader it was Mike Mahaney making a big move on the restart past Alan Johnson and into the fourth position.

Just 3 laps into the green flag run Friesen made his move, entering low and sliding out to the boards in turns 1 and 2 to pass the 99L of Larry Wight.  Once in the lead Friesen quickly opened up a 2 second lead.

With Friesen dominating at the front all eyes turned to the 32 machine of Brandon Grosso who was putting on a show on the outside of the speedway making his way through the top 10  into the 6th position, challenging the 35 of Mike Mahaney.

The yellow flag flew once again on lap 131 for the 14J of Alan Johnson who came to a stop on the bottom of turn 3.  He was able to re-fire and make his way to the hot pit area after the yellow as displayed with the team going to work on the right rear of the car but Alan eventually climbed out of his machine, ending his Speed Showcase 200.

The race restarted with 66 laps remaining and it was Mike Mahaney mounting a charge on Larry Wight for the 2nd position, but behind him the 7mm of Michael Maresca was stalking the 35 machine on the top of the speedway.  Maresca was able to make his way by Mahaney using the top of turns 1 and 2 and the bottom of turns 3 and 4 to complete the pass on the 35 of Mahaney.

The yellow flag flew again on lap 139 when Dominick Buffalino got into the wall in turns 3 and 4, collecting the 43 of Jimmy Horton.

The field took the green flag with 58 laps remaining in the 200 lap affair and it was again Friesen who jumped out to a big lead just 3 laps into the green flag run.

A yellow flag on lap 150 for Matt Sheppard who slowed on the frontstretch closed the field up once again an on the restart Michael Maresca was able to complete the pass on Larry Wight and set his sights on the 44 of Friesen, who had been dominating the event since taking the lead on lap 126.

With 37 laps remaining the yellow flag flew for the 99L whose right rear suspension broke after contact between himself and Matt Stangle on the backstretch while the two were racing for position.

On the restart Michael Maresca did not fire and pulled pitside giving 2nd place to Ryan Godown with Mat Williamson now into the top 4 with just 32 laps remaining.

Leaders entered lapped traffic with 20 laps remaining but by the time they reached lapped traffic the 44 of Friesen had built up a nearly 2.5 second lead on the 26 of Ryan Godown, Matt Stangle and Mat Williamson.

The yellow flag flew once again with 9 laps remaining as Jeff Strunk slowed and came to a stop at the top of turn 4.

When the green flag flew it was Friesen jumping out to the lead once again but a left front flat tire for the 3 of Mat Williamson caused  him to push up the race track in turns 3 and 4 which cost him a top five run.  Meanwhile, Matt Sheppard, who had pitted multiple times in the 2nd 100 laps made his way by Mike Mahaney and into the 4th position before the yellow flag flew again with 5 laps remaining for Ronnie Johnson who suffered a right rear flat tire on the 2RJ.

On the restart Sheppard continued his march to the front as he moved his way by the 26 of Ryan Godown and the 6 of Matt Stangle and into the 2nd position but the 44 of Stewart Friesen proved to be too tough for the rest of the field as he picked up the victory by 1.5 seconds over Matt Sheppard, Matt Stangle, Ryan Godown and Mike Gular.

Stewart Friesen was quick to call out his troubles at the Port Royal Speedway in Victory Lane.  “What a race team, this place has bit us so many times and we’ve been so close and had fast cars and had problems.  I just owe it all to my guys” said Friesen, who picked up his second $50,000 win of the season.  “It feels so good to get a win here.  The last time we were here in the spring it laid rubber and wasn’t much fun, but 200 laps pretty much ripping the fence is pretty badass, it was a lot of fun”

All eyes were on Matt Sheppard late in the race as he made a charge back into the top 10 after pitting multiple times in the second 100 laps, eventually winding up with a second place finish.  “We had a pretty good car in the first 100 that needed a few tweaks and I think everything we did at the halfway break was completely wrong so I pitted and told Randy that we needed to switch this thing back.”  Those changes proved pivotal as Sheppard was able to make his way back through the field.  “We made a pretty good charge up through the field there.  I finally cleared a couple guys and got into some open air and could tell I was really good.  I was kinda praying for a caution and we got one, but when I looked at the scoreboard and saw only 9 laps to go I thought it was a little late.“