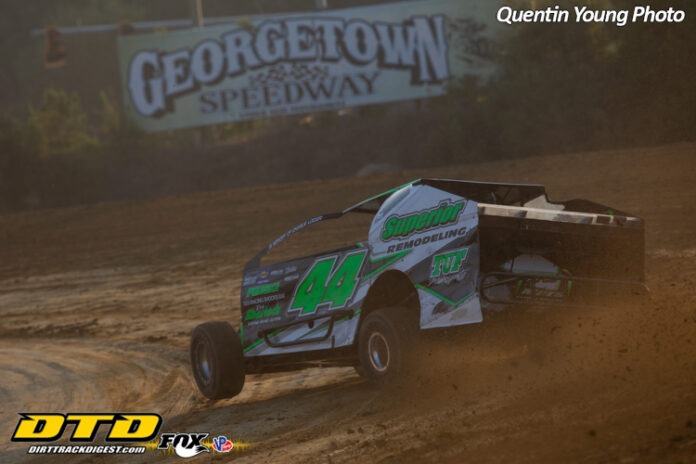 GEORGETOWN, DE – This one decides it all!

The Velocita-USA South Region presented by Design for Vision and Sunglass Central concludes on (Saturday) October 30. The STSS Modifieds battle for 40 laps around the Sussex County half-mile in the final points-paying race of the 2021 STSS season.

The ‘Mid-Atlantic Championship’ will take place for the fifth time since 2016 at the progressively banked half-mile. The event has been on the schedule every year since its inception in ‘16 with the 2018 edition being cancelled due to weather.

Along with the Modifieds, the Super Late Models have been a part of the ‘Mid-Atlantic Championship’ weekend since 2016, making it a double-headliner weekend.

The 2016 affair was not a Short Track Super Series-sanctioned race, as the season concluded at the ‘Blast at the Beach’ in 2016.

‘The Rocket,’ Ricky Elliott won the Super Late Models in 2017 over Hubbard, who was the runner-up for the second consecutive year.

Despite several attempts, including trying to run two programs on the same day, Mother Nature nixed the 2018 event.

In 2019, Milford, Del.’s Jordan Watson won a dramatic feature that saw leader Stewart Friesen run out of fuel in the final laps. Watson is a two-time STSS winner, with both coming on his home turf at Georgetown.

Georgetown, Del.’s Ross Robinson made it a clean sweep for the southern Delaware gang in 2019, picking up the Super Late Model win.

The most recent ‘Mid-Atlantic Championship’ race went to Savannah, N.Y.’s Matt Sheppard. The win was Sheppard’s first career triumph at the famed half-mile. ‘Super Matt’ has since added another win in this year’s ‘Melvin L. Joseph Memorial’ back in March.

The STSS is back at Georgetown Speedway for the third time in 2021 with championships on the line.

King Ferry, N.Y.’s Mike Mahaney leads the STSS South Region brigade into the final race by 44-points over Matt Sheppard. Mahaney is in pursuit of his first career STSS title.

The STSS Crate 602 Sportsman will be on hand on Saturday for a full championship program and a 25-lap, $1,500 to win feature event.

On Saturday (Oct. 30), the weekend and the season concludes as the STSS Modifieds and STSS Crate 602 Sportsman round out their South Region season at the Sussex County half-mile.

The Super Late Models will also be on hand to co-headline the season finale at the Georgetown Speedway.

The weekend breakdown and rules have been posted on the Georgetown Speedway and Short Track Super Series websites.