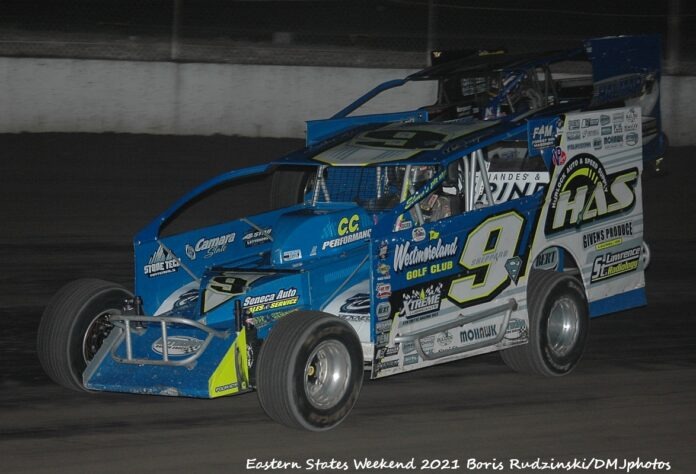 Jerry Higbie and Matt Sheppard led the 30 car starting field to the green flag, with Sheppard jumping out to the lead and dominating the early laps.

Meanwhile, behind the leaders it was Stewart Friesen making moves from his 6th place starting spot moving into the second position behind Sheppard.  Unfortunately for Friesen, his night would on lap 9 as he slowed in turn 4 due to a driveshaft issue and needed to be pushed back to the pit area.

When the race resumed it was all Matt Sheppard out in front building a nearly 5 second lead in just six laps after going back to green.

With Sheppard out to a commanding lead, it was only a matter of time before he reached the back of the field, and on lap 17 he was in heavy lapped traffic, allowing the 91 machine of Bobby Flood to take 3 seconds off of his huge lead.

As the race reached halfway, Sheppard had cleared the heavy lapped traffic and extended his lead to over 5 seconds over 2nd place David Schilling, but the yellow flag would fly for Sean Beardsley who slowed in turn 3.

On the restart, it was Anthony Perrego who first jumped out of line and made it 3 wide moving himself into the 4th position but the yellow flag would fly again for Dillon Steuer with 23 laps remaining.

When the green flag flew again Bobby Flood got into turn 1 a little too fast and lost multiple positions, allowing David Schilling, Anthony Perrego, Mat Williamson and Larry Wight to all get by for position.

With just 15 laps remaining it was still Matt Sheppard who maintained a comfortable lead over David Schilling and Anthony Perrego as he approached lapped traffic.

Sheppard’s lead began to shrink as he got into heavy lapped traffic and with 10 laps remaining; the cars of Schilling, Williamson and Perrego were all closing in on the leader.

It looked like it could get interesting as with only 8 laps to go, David Schilling had trimmed the Sheppard’s lead from over 4 seconds to just over 1 second, but that was as close as they would get, as Sheppard would again pull away as soon as he cleared the lapped traffic to a comfortable victory.

“This race car was just bad to the bone tonight.  Sometimes you never know what you’re going to get when you get to the track but from the second we unloaded this thing in hot laps it was bad ass” said Sheppard in victory lane.

Anthony Perrego and Mat Williamson were both able to make their way by David Schilling in the late stages of the race to take 2nd and 3rd respectively, with Schilling and Larry Wight rounding out the top five.