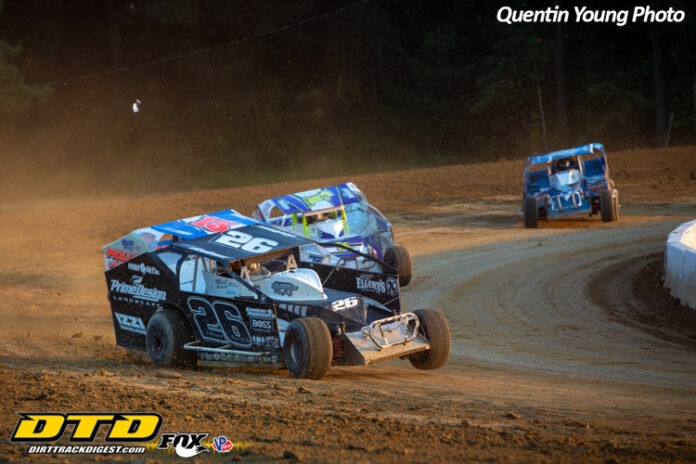 Georgetown Speedway hosts the STSS for the third time in 2021 in the Mid-Atlantic Championship Weekend.

The event serves as the 10th and final round of the South Region for the STSS Modifieds.

Georgetown hosts the STSS for a series leading 17th time in its history, and third time in the calendar year.

Frenchtown, N.J.’s Billy Pauch Jr. has dominated at the Sussex County half-mile since the middle of July. The ‘Kid’s Kid’ has won four consecutive Modified features at Georgetown, including the STSS ‘Blast at the Beach’ back in August.

Anthony Perrego enters the season finale with an outside chance at claiming the South Region title. Perrego’s chances took a big hit at the ‘Speed Showcase 200,’ however, the Empire State driver has a long history at Georgetown Speedway. Perrego will be laying it all on the line to visit Victory Lane.

Matt Sheppard’s history at Georgetown Speedway is very much a mixed bag. After struggling at the progressively banked half-mile, Sheppard has picked up two wins in his last three appearances. Sheppard, like Perrego, will be doing everything in his power to pressure Mike Mahaney for the championship.

Matt Stangle enters Georgetown off a recent surge in performance. Stangle was the runner-up to Pauch Jr. at Georgetown back on October 1 and finished third in the ‘Speed Showcase 200’ two weeks ago at Port Royal. Stangle continues chasing after Ryan Watt for the Georgetown Speedway Modified championship.

Ryan Godown heads to the site of his last STSS triumph, which was nearly four years ago to the date (Oct. 28. 2017). The Ringoes, N.J., driver currently sits fifth in South Region points, looking to end his Northeast season with a bang before heading to Louisiana for the ‘Cajun Swing.’

Milford, Del.’s Jordan Watson is a two-time STSS winner, both of which came at Georgetown Speedway, including the 2019 ‘Mid-Atlantic Championship.’ Watson looks to shake off his rough 2021 season with his third career STSS triumph.

The Super Late Models will do battle for 40 laps with a potential winner’s share of $7,000. The Late Models have their own J.D. Shuckers ‘Gambler’s Fee’, with the same rules applying as the STSS Modifieds.

The STSS Crate 602 Sportsman are on hand for Round No. 8 of the Belmont’s Garage South Region. Newtown, Pa.’s Joe Toth leads Horseheads, N.Y.’s

Ajay Potrzebowski by 54-points heading into the region finale.

The Little Lincolns, Delaware Super Trucks, and Delmarva Chargers round out the program in 12-lap, feature-only affairs.

For the October 30 event, pit gates will open at 1 p.m. with grandstands opening at 2 p.m. The pre-race Trick or Treat will take place at 3 p.m.

The ‘Mid-Atlantic Championship’ will be streamed LIVE on FloRacing (www.floracing.tv) as part of the annual subscription.