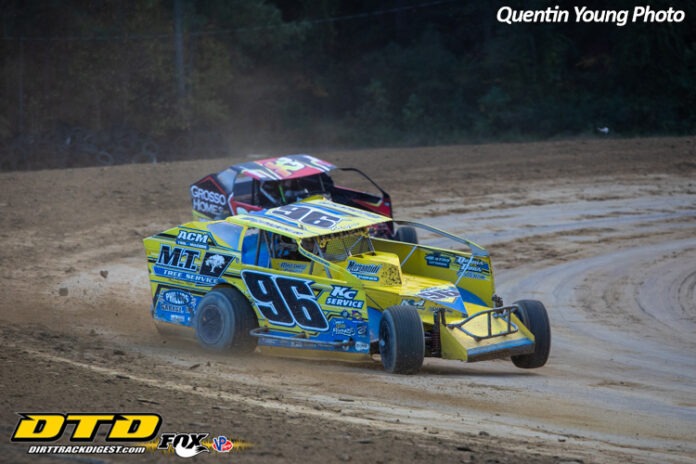 For the fifth consecutive time, Frenchtown, N.J.’s Billy Pauch Jr. claimed victory at the Georgetown Speedway in the ‘Mid-Atlantic Championship.’ The win was his second Bob Hilbert Sportswear Short Track Super Series (STSS) Fueled By Sunoco win of the 2021 campaign.

“My Dad (legendary driver Billy Pauch Sr.) has won 10 in a row at a track before, but I think five in a row is pretty impressive for what we do,” proclaimed Pauch Jr. of his feat in Victory Lane.

The ‘Mid-Atlantic Championship’ served as the 10th and final round of the Velocita-USA South Region presented by Design for Vision and Sunglass Central.

Despite coming home with a 12th-place run, King Ferry, N.Y.’s Mike Mahaney was able to 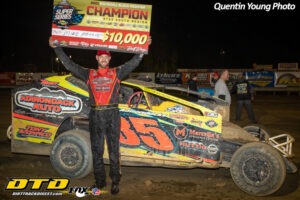 hold on and pick up his first career STSS championship.

“This point title was something we really wanted, and it feels great to get it,” said Mahaney of his $10,000 championship, his first with the series.

Pauch Jr., who started third, quickly raced into second on the initial green and followed Pettyjohn before a lap four yellow. On the restart, Pauch Jr. raced around Pettyjohn for the top spot.

Soon thereafter, Pauch Jr. would have a new challenger, as Middletown, N.Y.’s Anthony Perrego would slipped by Mark Pettyjohn into the runner-up spot. Perrego entered the South Region finale with an outside chance to claim the title.

Perrego’s march continued, as just two laps later the title contender raced to the inside of Pauch Jr. and took the top spot away, attempting to steal the race and the championship all in one night.

A lap-13 yellow gave attention to Potsdam, N.Y.’s Mike Maresca, who had risen from the 14th starting position into sixth before the halfway point of the race.

When the field went back to racing, Perrego continued to pace the field while Maresca climbed to fourth and Boyertown, Pa.’s Ryan Watt went on a charge to the sixth position from 11th before a lap-21 yellow restacked the field.

Perrego picked up the Danny’s Pizza Pizzazz $200 halfway bonus adding to his $500 in memory of Gary Simpson for leading lap 12.

The lap-21 restart was the one Pauch Jr. was looking for. The ‘Kid’s Kid’ executed a perfectly timed slide job, reclaiming the top spot. A few laps later, on lap 26, Maresca fell victim to a left rear flat tire, dashing his charge for his first career Georgetown win.

Watt continued to navigate a tricky racetrack perfectly on the restart, going around both Perrego and Milford, Del.’s Jordan Watson to take the runner-up spot and lock eyes on Pauch Jr.’s back bumper.

The next 14 laps went caution free, and Perrego showed all he needed all race was some green flag racing. ‘Kid Giddy Up’ drove from fourth to second, while he and Watt reeled in Pauch Jr. in lap traffic, before another yellow came out with just two laps remaining.

The final restart proved to be no sweat for the Kid’s Kid, as he claimed his fifth consecutive Georgetown win in his Rick Holsten-owned No. 96.

Perrego did all he could in the championship chase, coming home with a runner-up finish in the Brian Smith-owned No. 44. Watt rounded out the podium in his Ron Roberts Racing No. 14w. 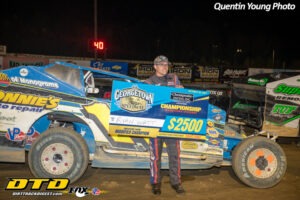 The podium finish was good enough to award Watt with the Georgetown Speedway Sunoco Championship Series $2,500 title in the Chesapeake Paving Modified division.

Jordan Watson raced to fourth in his Brent Hall-owned No. 18 and Boyertown, Pa.’s Mike Gular snuck into a top five in the Terry Fasnacht-owned No. 2A.

Sixth was Savannah, N.Y.’s Matt Sheppard in the Hurlock Auto & Speed Supply No. 9S. Neshanic Station, N.J.’s Matt Stangle continued his run of solid finishes in his family-owned No. 6 with a seventh-place run. Belle Mead, N.J.’s Brandon Grosso recorded an eighth-place finish. Sayreville, N.J.’s Dominick Buffalino finished ninth after losing power steering at the halfway point in the Glenn and Bonita Hyneman-owned Keystone Racing No. 126. Lawrenceville, N.J.’s Wade Hendrickson made a rare Georgetown appearance in his Pat Michael No. 51m and came home with a top-10 finish.

Twenty-nine STSS big-block Modifieds signed in to compete in the ‘Mid-Atlantic Championship.’

Heat winners, receiving $50 each from FloRacing, were Joseph Watson, Pettyjohn, and Watt.

The Super Late Models returned to Georgetown for the second time this season, and Georgetown, Del.’s Ross Robinson returned to Victory Lane once again, earning $7,000 after posting the $100 JD Shuckers of Georgetown “Gambler’s Fee” pre-race.

Despite starting from the outside pole position, Robinson earned every bit of his triumph over the 21-car field.

Robinson jumped out to the early lead, while Linden, Va.’s Kyle Hardy made his way to second and began to run down Robinson in the opening 10 laps.

Hardy’s fellow Virginia native, Trevor Feathers came with Hardy to the front, as the two reeled in Robinson in lap traffic as the field neared the halfway point of the 40-lap affair.

On lap 17, Robinson found out he had company, as Hardy pulled up alongside ‘The Boss’ but got picked off by a lap car, allowing Robinson to slip away.

Feathers would slide by Hardy in lap traffic before a lap-20 yellow, setting up a classic duel between Robinson and Feathers.

From laps 20-35, Feathers stalked Robinson, looking for a mistake but never getting one. In the final five laps, Feathers turned up the pressure, showing his nose to Robinson on both the inside and outside on multiple occasions.

On the final lap, Feathers dove underneath Robinson in turn one and took the lead down the back straightaway. Feathers chose the run the ‘slider line’ in the final corner, entering on the bottom and sliding up to the top.

Robinson used outside momentum to drive underneath Feathers off the final corner and beat Feathers to the line.

Feathers came home with a runner-up finish and York, Pa.’s Rick Eckert rounded out the podium finishers. Millsboro, Del.’s Amanda Robinson returned to Super Late Model racing at Georgetown with a fourth-place finish and Hardy faded from his challenge for the lead to a fifth-place finish.

Godown used a lap-17 restart to get around Newtown, Pa.’s Joe Toth, who was battling engine issues, to take the lead for good and get his second STSS win of the season.

Joe Toth faded to 11th with his problems, but the finish was good enough to claim both the $1,500 Belmont’s Garage South Region title, and the $750 Georgetown Speedway championship as well.

Melvin Joseph claimed the dominant victory in the Little Lincoln feature over Jordan Herbert and Kirk Lawson. Joseph led all 12-laps, claiming all of the $240 in lap money posted for the event.

Geoff Carey was the victor in the Delmarva Charger 12-lap feature for the first time in 2021. Carey upended Robert Paczkowski and Ashley Merritt for the win.

Racing resumes tonight at Georgetown Speedway with the PA/NJ Spec Small-Blocks and the RUSH Late Models headlining the program. The small-blocks will race for 30-laps and a potential $5,000 winners share. The Southern Delaware Vintage Stock Cars, Delaware Super Trucks, and Delmarva Chargers are also the Sunday Matinee.

The entire night of racing will be broadcast live on FloRacing (www.floracing.tv) as part of the annual subscription.

Did Not Start: David Brobst

Did Not Start:  Thomas Jackson