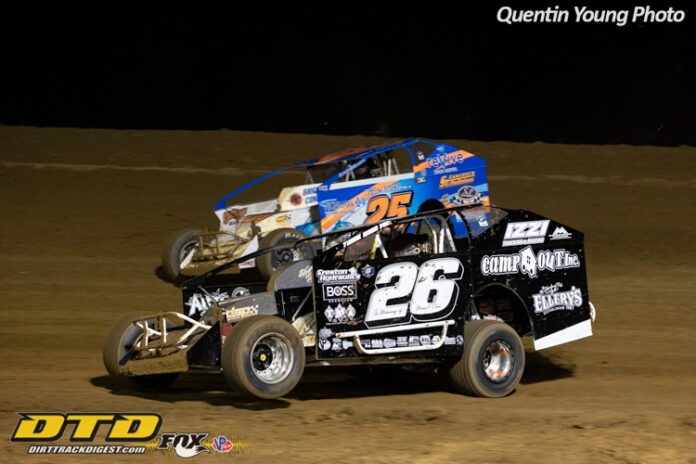 GREENWOOD, LA – The Beatles once had a hit song called, ‘With a Little Help from My Friends.’

That song is fitting for Ryan Godown on Tuesday night as he opened up the Short Track Super Series Cajun Swing with a win at the Boothill Speedway.

Godown had some help from Matt Sheppard and his crew to get the rear-end changed in his ride prior to the start of the 40-lap feature.  He just made it in time to start the feature.  Good thing they did.  Godown went on to win the opening night in Louisiana to earn $4,000.

“It’s been one heck of a day,” stated Godown.  “I just can’t thank the whole Matt Sheppard organization and clan.  Without him and his crew, I wouldn’t even have been out here for the feature.  When I crossed the checkered in the heat race the rear-end blew up.  We thrashed all the way to the feature just to get it out here.

“This is just awesome.  It’s a fun week.  No matter what happens the rest of the week we’ve had a blast.  We are just going to keep having fun here.”


Rocky Warner and Jack Lehner started on the front row with Lehner getting the drop on Warner from his second starting spot as the race got underway.

By lap three, Lehner was already in traffic and opening up a sizeable advantage on the field as he was flawless in the early go.

Lehner continued to set the pace when Short Track Super Series Cajun Region champion Caleb Dillard slowed to bring yellow for the first time on lap nine.  Dillard limped down the frontstretch with problems on his No. 18.

Lehner bolted to the lead on the restart.  Unfortunately, it wasn’t going to last.  Lehner’s run at the front came to an end when he slowed after going three-wide with slower traffic.  Lehner got into one of the slower cars and broke something in the rear to bring out the second yellow of the race with 13 complete.

This gave the lead to Warner which he was able to keep when the race went back to green.  Warner and Friesen had a great battle with Friesen keeping up the pressure on Warner.  He stayed right with him as the entered traffic on lap 19.

The red flag was required on lap 22 as Warner and Friesen tried to duck under the lapped car of Jimmy McCommas.  Warner pushed up and just caught the left rear of McCommas causing his car to hop and get up and over.  He walked away from the crash unhurt.

Warner kept the lead on the restart with Friesen staying with him every step of the way.  Warner was able to hold off Friesen.  He started to gain some breathing room when the caution came out with 24 laps complete as Glenn Stone and Thomas Holt got stuck together in turn two.

On the restart, Sheppard and Rudolph got together when something appeared to break on the No. 9s.  This sent Sheppard spinning off of four with several cars being collected.  Sheppard was able to drive away, but he headed directly to the pit area.  His night was done.

Warner maintained the lead at the green.  Friesen was undeterred as he kept threating him lap after lap.  On lap 28, Friesen looked low to go under Warner.  He caught a slick spot in turn four which caused him to nearly spin.  This forced him down into the infield allowed the ninth starting Godown to move into second.

Godown now hounded Warner.  He worked high and low before finally finding the right move to make.  On lap 32, Godown went high in turn one and drove low off of turn two to get under Warner to take over the race lead.

“Stew made one mistake in the black stuff over there,” mentioned Godown.  “I almost spun out when I was behind him.  It just appeared.  It was like ice over there.  I saw him do that so that’s why I was running around the top.  I tried to stay out of black and stay in the good stuff.  Rocky didn’t know which way; he was running good.”

That’s where he would stay for the final eight laps to score the opening night win for the Short Track Super Series Cajun Swing.  It was his first series win since way back on October 28 of 2017.

Erick Rudolph steadily advanced throughout the feature putting him in second at the checkered flag.  Rudolph started back in 11th and took advantage of mistakes by other drivers to drive his Bicknell onto the podium

“The caliber of competition here always makes it tough starting in the back like that,” said Rudolph.  “As the track go slick enough and widened out a little bit, we were able to make some key passes on the way up.  The car was spot on.  Hats off to the team for giving me a good piece to drive.  Things are off to a good start this week and we look forward to Ark-La-Tex (Speedway) tomorrow.  We’ll see how it goes.”

Friesen regrouped late to finish in third after going through the infield and rejoining the field on lap 28.  It wasn’t the outcome he was hoping for, but it was a nice recovery after he nearly spun out.

“I made a couple mistakes there racing Rocky,” said Friesen.  “It’s a long week of racing. I got into that slick stuff and half spun and had to go through the infield which let Ryan and Erick go by.  That was all she wrote.”

Warner fell all the way back to finish in fourth at the checkered while Derrick McGrew Jr., finished right where he started in the fifth position.