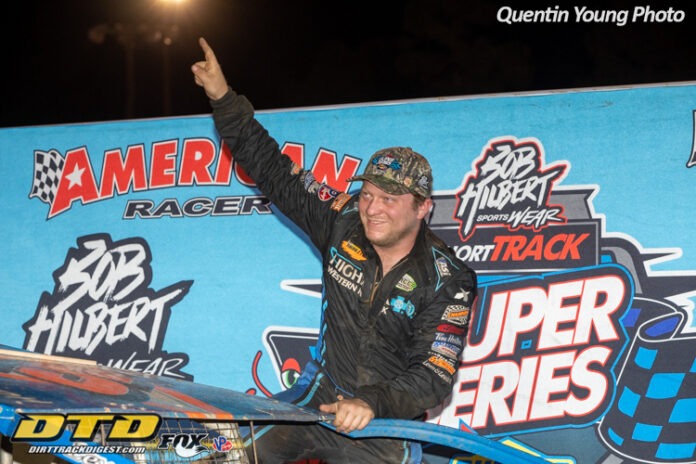 VIVIAN, LA – It wasn’t a Sprint Car race, but there were plenty of slide jobs in Wednesday night’s Short Track Super Series Cajun Swing event at the Ark-La-Tex Speedway.

At the end of numerous sliders, 11th starting Erick Rudolph came out on top after exchanging the lead multi-times with Ryan Godown for his fourth career series win and the $4,000 winner’s share.

“I wasn’t sure what to expect looking at the track here,” stated Rudolph after the win.  “My crew chief and I made some good decisions here and I think we got it pretty close.

“I could use some help in the drawing department.  The good thing is there is some room for improvement.  I have to thank all my sponsors, my whole team, and also all my fans.”

Two drivers that had battled for the lead the night before brought the field to green flag in Rocky Warner and Ryan Godown.  Godown took the high-road through turns one and two allowing him to drive by Warner for the lead on the opening lap.


Before another lap could be completed, caution was needed as Tommy Rascoe got over the bank in turns three and four and spun.  A lap later, John Lutes Jr., did the same for back-to-back cautions.

When action picked back up, Godown raced out in front as Warner gave chase as Mike Mahaney, Derrick McGrew Jr., and Stewart Friesen worked each other over for the third position.

It was only lap six when traffic came into play for the first time.  Godown utilized the high-lane through the slower cars while opening up his lead over Warner as he now was confronted by Friesen.

Friesen and Warner put on a show for the next five laps.  The duo raced hard for the runner-up position with Warner able to keep Friesen behind him at every turn.

Lap 13 saw another caution as Brent Buckley slowed on the frontstretch bunching up the field again with Godown and Warner on the front row for the next green.

Godown jumped to the top on the restart and was able to keep everyone behind him.  As he raced away, Friesen renewed his battle with Warner.  He finally made the move on lap 19 to take the second position.

With Godown leading, Friesen ran second while Rudolph and Matt Sheppard, who started 26th, battled each other for the third position.

On lap 27, Friesen slowed on the backstretch after contact with Godown as they were racing for the lead.  Godown came up on three slower cars racing three-wide.  He dove to the bottom not realizing Friesen was there.  They made hard contact causing Friesen to catch a tire on the bottom of the speedway breaking his frontend and ending his night.

For the green, Godown and Warner ran first in second with Rudolph third.  Rudolph moved by Warner to take second.  He then focused on Godown.

Rudolph looked under Godown on lap 30, but he couldn’t get the job done.  A lap later he used as slide job in turns one and two to take the lead briefly.  Godown drove back around him in turns three and four to pull even as the completed lap 31.

Rudolph used the same move again in turns one and two on lap 32 to regain the top spot.  This time he had enough to keep Godown behind him in turns three and four allowing him to keep the lead.

“The track changed a lot from the beginning to the end of the race,” mentioned Rudolph.  “I was able to pass a few cars early and then we kind of stalled out in fifth spot or so.  Later in the go it seemed like the car came alive a little bit.”

Rudolph was challenged with one more restart as the caution was needed as a car spun in turn four on lap 33.  Rudolph was strong at the green not allowing Godown a shot to get by.  He led the final handful of laps for the victory.

“You’re always worried with the stellar competition here,” stated Rudolph about the final restart.  “You always worry about restarts, who is behind you and everything else.  We were trying to finish the win off and get a win here.”

Godown finished second and was happy while being very apologetic about the incident between himself and Friesen as they raced for the lead.

“He was good,” cited Godown of Rudolph.  “He had a lot more drive off the corner.  I was struggling the last 10 laps there to get drive.  I don’t what happened with me and Stew there.  I was battling with four lapped cars and just went to the bottom.  I never ever saw him.  It is unfortunate.  I don’t want to get into anybody.  When you have four lapped cars in front of you, you want to do anything like that.  We’ll take second to Rudolph, congratulations to him.  We’ll just keep picking away.”

Warner bested his Tuesday night effort with his first podium finish of the week.  He was in the hunt for the win until his car went away late.

“It’s hard to figure out how to keep it (car) freed up little bit at the end of these races,” said Warner.  “I think we’d be another couple spots forward and snag one of these away.  We got a real good car.”

Did Not Start: Tyler Siri