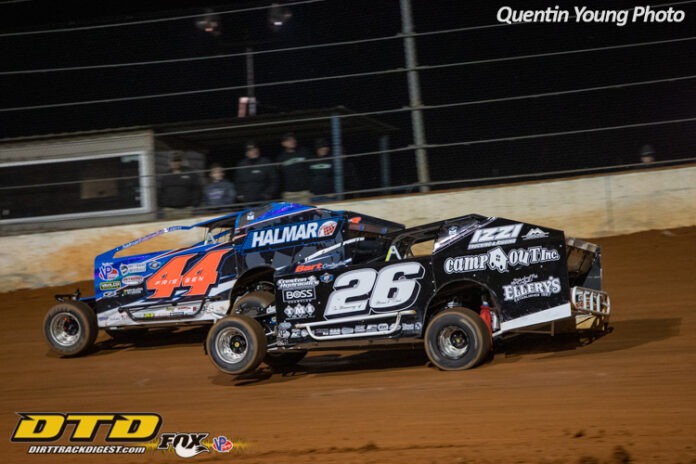 Ryan Godown lost the lead mid-race to Stewart Friesen, but Friesen ended up getting upside down all by himself after the right rear tire came off allowing Godown to retake the lead and then the win at The Rev.  Godown drove away late in the 40-lap feature for a $5,000 Short Track Super Series Cajun Swing victory.

“I just want to thank all these guys in Louisiana and Brett Deyo for putting on these shows,” said Godown.  “We’ve been here three days and it feels like seven or eight.  This is really awesome.

“It was unfortunate for Stew (Friesen).   I hope he’s okay.  I don’t know what happened to him.  Hopefully he’s okay and can get back out tomorrow.  I can’t thank my guys enough; they gave me a fantastic hot rod.  We had a decision to make to tighten it up and they made the right choices.   It’s been an awesome deal.  We just got to keep rolling.”

A front row starting position propelled Godown to the lead at the start as he went to the top of turns one and two to take the lead from pole starter Derrick McGrew Jr.


Godown was the leader when the first caution came out as Joe Boswell slowed while Erick Rudolph and David Forbis came together in turn one.  Rudolph’s night was over.

Godown stayed out in front at the green flag with Friesen pursuing.  He hung with Godown but wasn’t able to find a way around Godown’s Bicknell No. 26.

Another caution was necessary when Steve Davis slowed on lap 16 with a flat tire to bunch the entire field once again.

Friesen used a slide job on the restart to take the lead away from Godown.   He went low in turns one and two before sliding up in front of Godown off of turn two to take the lead.

Two laps later Friesen’s night came to an end when his right rear tire came off in turn one sending the No. 44 into a wild series of flips.  Thankfully, he was able to walk about from the incident without injury.

Godown inherited the lead and kept it as the race got back underway.  He opened up the edge on the field while Mahaney tried to track him down.

Godown retained the lead when the final caution came out on lap 32 when Eric Williams slowed with mechanical woes.

Godown kept Mahaney behind him on the restart before driving away.  Mahaney and Sheppard battled hard for the runner-up position.

At the checkered it was Godown taking the $5,000 win and Mahaney finished in the second position.  He did all he could to get to Godown to no avail.

“I think we were little under geared there,” mentioned Mahaney.  “I expected when we came out, the track was black top to bottom, it got ripped up and got a lot tackier.  The cushion stayed low and it wasn’t far enough for the gear I had.

“He was doing to some really slow restarts.  I happy to get second and rebound.  I’m really proud of our team.  Hopefully this gives us a little momentum going into Chatham (Super Bee Speedway).

Sheppard finally had some luck allowing him to finish third.  Sheppard started by in the 11th position and steadily worked forward.

“We didn’t pick a really good number, but I guess we survived,” commented Sheppard.  “This is a pretty cool place.  I’m just happy to survive a feature without any issues and get a podium finish.  Hopefully we can move on and have a better night tomorrow.”

Jack Lehner advanced from eighth to finish in fourth while Willy Decker was able to complete the top five.