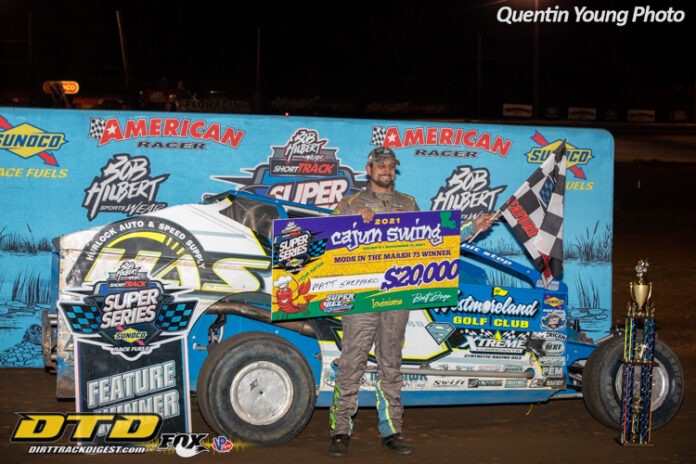 CHATHAM, LA – For the second consecutive year, Matt Sheppard is leaving the state of Louisiana $20,000 richer after earning the victory in the Short Track Super Series Cajun Swing finale at the Super Bee Speedway.

Jack Lehner and ‘Cajun Region’ regular Greg Dillard led the 27 car starting field to the green flag in the 75 lap feature affair with Lehner jumping out to the early lead.  Matt Sheppard, who started in the third spot quickly made his way past Dillard for the runner up spot, but the yellow flag would fly for a three car tangle in turn 1.

On the restart it was Lehner again getting the jump with Sheppard in tow, but Erick Rudolph was also making moves, and positioning his 25 machine into the 3rd position before the yellow flag flew again on lap 2 for Darrell Fowlkes who slowed in turn 4.

When the race restarted it was Sheppard who worked the top of the speedway to perfection to take the lead from Lehner in turns 3 and 4 but the race was slowed again on lap 5 for Joe Boswell who slowed down the frontstretch.

As the field came back to green Sheppard again jumped out to the lead with Mike Mahaney, Erick Rudolph and Stewart Friesen battling for third, fourth and fifth.


The leaders reached lapped traffic after just 10 circuits with Mahaney and Rudolph trying to close the gap on second place running Lehner.

As the race reached the ¼ mark Sheppard had built a 3 second lead over Jack Lehner and Erick Rudolph who made his way past Mike Mahaney.

While the leaders battled it out up front, 12th place starter and Cajun Swing point leader Ryan Godown was moving up through the field, making his way into the 4th spot on lap 27 but the yellow flag would slow his progress as Mike Krompegal slowed with a flat tire.

On the restart Ryan Godown made things very interesting, making it three wide with Erick Rudolph and Jack Lehner as they battled off turn 2, with Godown making his way into the third position but the yellow flag would fly once again for the 959 of John Lutes Jr who slowed down the backstretch.

When the green flag flew again Godown made his way past the 2 of Jack Lehner into second, but Stewart Friesen was the man on the move, making his way into third past Erick Rudolph and Jack Lehner.

Matt Sheppard worked his way into lapped traffic on lap 39 and that allowed the 26 of Ryan Godown to close in almost instantly on the 9s machine, but Sheppard stayed aggressive in lap traffic and pulled away from Godown by nearly 3 seconds with 30 laps to go.

With most of the top five in heavy lapped traffic on lap 50, Rocky Warner started to made his move into the top five past the 44 of Stewart Friesen.

Meanwhile the lapped traffic slowed leader Sheppard enough to allow Ryan Godown to close the gap to a car length as the field completed lap 58 and took the lead in turns 1 and 2 but Sheppard battled back in turns 3 and 4 to maintain the lead by just .146 seconds before the yellow flag would fly again with just 15 laps to go.

During the yellow flag, Stewart Friesen headed pitside to change a right rear tire.  He restarted in the 8th position.

When the racing resumed it was Sheppard jumping to the lead but Godown worked the top of the speedway trying to make it stick but could not complete the pass.  As the field charged down the backstretch Mike Mahaney and Rocky Warner came together, with Warner getting the short end of the stick as he ended up in the infield with a bent left front wheel.

Matt Sheppard again got a great restart and this time it was Erick Rudolph who put pressure on Godown taking 2nd pace in turns 3 and 4 as the field clicked off lap 63.  Meanwhile, Stewart Friesen was working his way back through the field after pitting for a right rear tire just a few laps earlier.

A mistake in turn 4 by Sheppard allowed Erick Rudolph to close the gap on the 9s machine with just 7 laps remaining, but he was able to rebound and maintain a 5 car length lead as the field came to 5 laps to go.

Sheppard went the final 5 laps unchallenged as he picked up the “Mods in the Marsh 75” for the second consecutive year over Erick Rudolph and Ryan Godown.

“What a great end to the week.  Like we talked about last night we’ve been getting better every night, finishing better every night and this was the pot of gold at the end of the rainbow down here so to come home with this is gonna make the ride home to New York a whole heck of a lot easier” said an excited Sheppard in victory lane.

Sheppard was also quick to praise his crew, who has been with him on the road for the last two weeks.  “I can’t thank my guys and my sponsors enough, we’ve been on the road for two weeks here and they’re taking time off of work, busting their butts since the beginning of last week.  So to cap the season off like this is just really for all of us, really good for the whole team.”