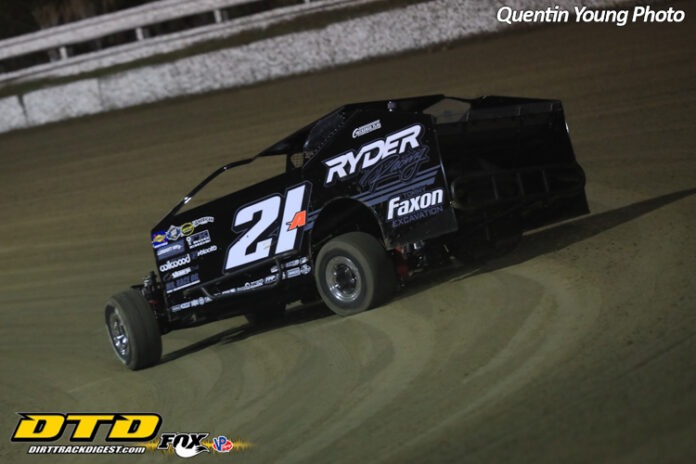 At the age of 14, over 10,000 miles away from dirt Modified’s motherland, and with no real racing background, Britten strapped into a race car – a Four-Cylinder – for the very first time.

“I didn’t really come from a real racing family,” the Australia native explained. “When I was younger, I’d go to the races with my Dad and we’d watch together from the stands until eventually we got a Four-Cylinder and started having a little fun.”

About two decades later, Britten, now a staple in the Northeast, is set to embark on a chase for the Halmar International ‘Elite’ Series and the River Valley Builders North Region championships, under the Bob Hilbert Sportswear Short Track Super Series (STSS) Fueled By Sunoco umbrella.

The Elite Series – a six-race collection that pays at least $25,000 to win four times and more than $50,000 twice, in addition to its $25,000 champions purse – has garnered the attention of teams and fans alike heading into the new year.


“I heard some of the rumors of the Elite Series, but, to be honest, I didn’t really believe it,” Britten said. “Brett (Deyo) has changed the game.”

“He’s been doing a good job of building his deal up and making it attractive for guys like me,” Britten went on. “I was impressed, obviously. My hope is that it is successful for me, but also the series, so we can expand it to more races. For guys like me that do it for a living, you have to support the guys that are paying more money.”

“It’s motivation for everyone to keep raising the stakes,” Britten opined.

Back in Queensland, Britten kept progressing through various classes before eventually securing a ride in a Modified in the mid-2000s.

“It was a little beyond our skill set and our capabilities to really succeed but we wanted to try,” Britten remembered. “We over performed with an old car which created an emphasis on getting better equipment.”

Eventually, Britten capitalized on an opportunity to start a Troyer dealership in the Land Down Under.

“It was a really cool deal,” Britten recalled. “I became tight with people over here, we had good info flowing and I hit the ground running really good.”

“For me, that changed racing forever.”

In 2009, that partnership with Troyer and his relationship with Bill Colton led to Britten’s first competitive voyage to the United States, a two-week venture.

“I got my ass handed to me, pretty much,” Britten said with a laugh. “But from then on, I was hooked.”

“It’s funny. When you don’t know anybody, you think nobody respects you, but then it just takes one of the good guys to come and shoot the crap with you to feel like you belong,” he said. “Then you want to beat them all the time.”

“That’s just the journey of racing.”

Despite being historically limited to the Northeast in the United States, the dirt Modifieds have slowly continued a sprawl outside of the region under the Short Track Super Series banner. Britten will kick off his pursuit of the inaugural ‘Elite’ Series crown at Cherokee Speedway for the Rebel 50 in Gaffney, S.C.

“The game is changed with the streaming stuff,” Britten noted. “Streaming is really opening up new avenues for promoters to tackle and make their deal a better one, and Brett has done that.”

Like 2021, all events sanctioned by the STSS will be broadcast live on Flo, beginning with the Sunshine Swing at All-Tech Speedway in Lake City, Fla., from Wednesday, Feb. 9 through Saturday, Feb. 12.

“This is a good time for dirt-track racing in general,” Britten mentioned. “Late Model purses are up, Sprint Car purses are up, and it’s exciting that we can keep pace with those guys.”

After his initial trip behind the wheel in the U.S., Britten returned in 2010 full-time as a crew chief and mechanic of Rich Scagliotta’s No. 8 machine.

“Even then, I had to pinch myself,” Britten fondly remembered. “Working full time and going racing… it was amazing. I remember thinking ‘this is pretty freaking cool.’”

“From there, this whole thing just continued to grow and morphed into what it is now,” Britten continued. “I never thought this was possible, I just tried to take advantage of every opportunity I had. I’m really driven by the love of this sport and I’m just a very competitive person by nature.”

“I don’t take many challenges lying down,” he said with a chuckle.

Peter Britten has defied the odds to build his career to what it’s become.  In 2022, he’ll attack another challenge head on as he, along with the rest of the dirt Modified world, prepares for the historically lucrative STSS ‘Elite’ Series.