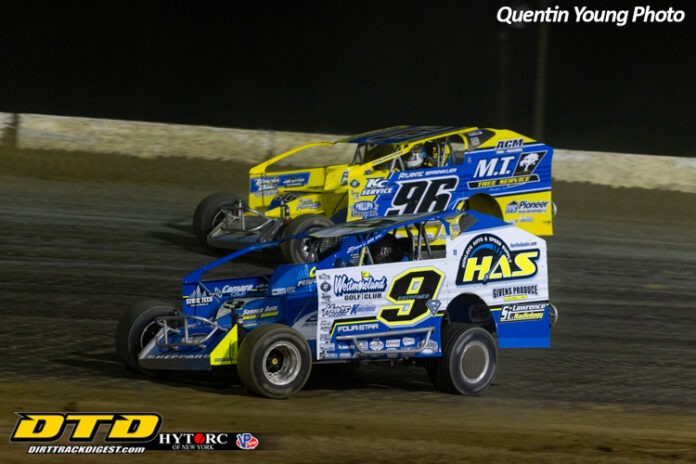 LAKE CITY, FL – It took over two years, but Matt Sheppard finally has a Sunshine Swing victory with the Short Track Super Series.

The former series grand champion hasn’t had much go his way in Florida with the series.  That is until Wednesday night’s series opener at the All-Tech Raceway.

Sheppard got some luck en route to the $4,000 payday in the 30-lap feature event to kick-off the Northeast Modified season on a high note.

“What a wild one,” commented Sheppard.  “It seems like a few times we are always on the bad end of the cautions coming out at the wrong time, the lapped cars and blah, blah, blah.  Tonight actually went our way.  I think that is why we are sitting here.”

Michael Maresca was the leader at the get-go after starting from the pole position.  It was a quick sprint at the start as the first caution came quickly for a spinning Larry Wight on lap two.

Sheppard took advantage of the restart to move from fourth up to the runner-up position.  At that point he applied constant pressure to the leader Maresca.

On lap 12 Sheppard was able to make his first bid for the lead.  Maresca went to the outside of a slower car.  As he tried to get by the lapped car pushed up and into Maresca putting him into the outside wall.  Sheppard tucked underneath for the lead as they exited turn four.

“I would catch a good lap here and there and then I’d take it a little too easy and pick up a push,” stated Sheppard.  “Then I’d drive a little harder trying to get in the turn and get to spinning my tires.  What a fun race track.  It was smooth, wide and slick.  We could race all over it and put on a heck of a show.”

Sheppard led lap 25 with Billy Pauch Jr., beginning to mount a charge.  Pauch Jr., went by Sheppard on lap 26, but the pass was negated as Stewart Friesen slammed the turn three wall when something broke on his No. 44.  This caused a yellow before the lap could be completed.

“I picked up a big push and Billy got by me there,” mentioned Sheppard.  “Luckily, Stewie saved us with the caution.  I definitely wanted to see that open race track at the end.”

Open race track was the game changer for Sheppard as he drove away over the final handful of laps to pick up his 22nd career Short Track Super Series win.

Pauch Jr., was forced to take home silver in this event on a track he’s traditionally not very good on.  He felt that tires played a factor in the eventual outcome.

“I don’t know if was the lapped cars or my right front finally got heat in it and I could turn,” said Pauch.  “I caught him (Sheppard) and actually thought I was better than him.  Then he fired there and my right front didn’t. I felt like I was catching him again at the end.  This place is odd.  I’m usually terrible in this.  I’m pretty happy with it.”

Albany-Saratoga Speedway regular Marc Johnson put on show finishing in third position.  He dropped back early before rallying late to round out the podium.

“That was pretty fun,” commented Johnson.  “I’m glad to be back racing.  I was racing Pauch there and I saw the leaders coming back to us.  I thought I might have something, but the yellow came out.  It is what it is.  We are happy.  Beer will taste a little better tonight.”

Erick Rudolph came home fourth while Wight bounced back after the lap two caution to finish in the fifth position.

Matt Stangle, Maresca, Jeff Taylor and Pauch Jr. came away with opening night heat victories for the Modifieds at All Tech Speedway on Wednesday night.

Forty-two Shorts Track Super Series Modifieds were outside for the first of four nights.

Stangle was unheeded in his first heat of the night and coasted across the line.

However, Tyler Siri put on a show, starting eleventh and muscling his way to fifth place by the halfway point and as the laps ticked off he picked off car after car to come home with the runner up position.

Erick Rudolph, started eighth, settled for third while completing the qualifiers in th first heat were Nicholas Mady JR. and Tim Buckwalter (who passed Bobby Flood coming off the fourth turn in the final turn).

Maresca was in mid-season form as he started sixth and on the fourth lap he ducked around David Schilling.

Action in mid-pack was nothing short of sensational as Friesen, Wight and Peter Britten were dicing for fifth, sixth and seventh in the early going.

As the race wore down others crept into the mix.

Maresca dominated and won by nearly a straight while Friesen got Schilling for the runner up spot coming off four on the final lap. Tanner Vandoren and Wight rounded out the qualifiers.

Taylor made his STSS All Tech debut from the pole of heat three and he too ran away from the field.

Attention was on the No. 1K of Rick Laubach as he started eighth and at the halfway point he dove under Demetrios Drellos and into the runner up spot.

Meanwhile, Billy Decker, J.R. Heffner, L.J. Lombardo and J.R. Hulburt were dicing it out for the other qualifying spots.

At the checkered Taylor, Laubach and Drellos were followed by Decker and Heffner. Filling out the field were Lombardo, Rusty Smith, Danny Bouc, Hurlburt and Doug Snyder.

Finishing out the qualifiers Marc Johnson and Pauch Jr. took the field to the green and “The Kid’s Kid” launched the No. 96 to a commanding lead.

Eyes were on Matt Sheppard as he had drawn the outside of the fourth row and by lap five he was in fifth for a qualifying spot. Matt picked them all off except for the leader as he finished second to Pauch.

Johnson was a solid third while Mike Mahaney bounced up to fourth as he passed “The Doctor” on the final lap to complete the qualifiers.

The All Tech preliminaries on night one of the Sunshine Swing saw just one yellow flag through four heats and two consolations.

The final eight cars to earn berths for this year’s opening night saw both pole sitters chalk up victories.

In the first one Flood took off, but the scrambles were on behind him with runner up L.J. Lombardo getting past Alex Yankowski with just two laps to go. Yankowski settled for third.

The fourth and final spot went to Danny Bouc despite a bobble on the final lap where he sent his car up high near the fourth turn wall allowing Addison Bowman to challenge right to the line.

Hurlburt brought out the lone yellow of the prelims as he spun to the low side of the track in turn four.

In the second consi Britten dominated and when the checker had fallen Danny Creeden, Darren Smith and Jordan Watson earned a spot in the 28 car field behind Britten.