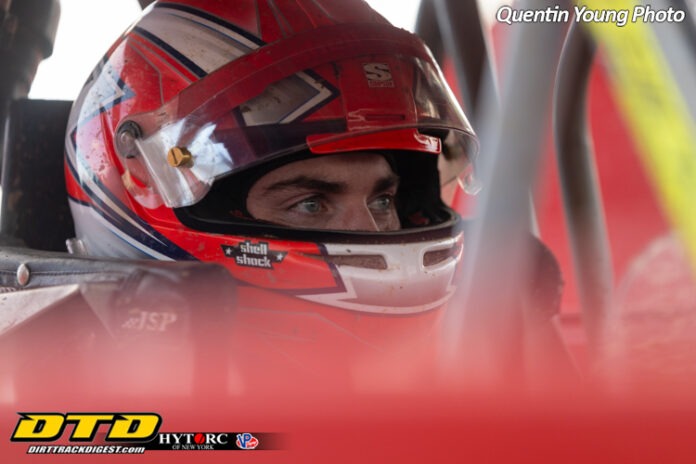 Larry Wight picked up his first career Short Track Super Series win on Thursday night of the Sunshine Swing at the All-Tech Raceway.

Wight started fourth and was in the lead before lap five was completed.  He survived a few late race restarts to pick up the $5,000 victory.  He became the 35th different winner in series history.

“I’ve been chasing one of these wins for a long time,” stated Wight.  “We were close when we were running the Gary Simpson car.  It seemed like every time we got rolling we had something break or had bad luck.  We came back to running our car at the end of last year trying to get one of these races.  We’ve been close, but we never able to finish it off.”

He finished it off on this night after making his move on lap four.  Billy Pauch Jr., jumped out to the lead from the outside of the front row starting position.  Wight got the best of him on lap four as he slid high and Wight went low off of the fourth corner.

Wight pulled away while Pauch Jr., found himself in a battle for the runner-up position with Erick Rudolph.  Rudolph, who advanced from eighth, went by Pauch on lap eight to take over second.

The bottom became the preferred line as the race progressed with Wight refusing to leave the inside lane as Rudolph hounded him.  Rudolph gave him several taps to the rear bumper, but Wight was undeterred.

Wight kept his No. 99L glued to the inner-lane on the speedway.  He never wavered.  Even with a caution on lap 31 for a slowing car, Wight stayed on the inside on the restart forcing anyone that was hoping to steal the lead away to go around the outside.

“I knew if I stayed on the bottom and stayed around those tires it didn’t matter who was behind me,” cited Wight.  “They were going to have to smash me out of the way to get by.  The group of guys we are racing with here, they may have got a bad rap several years ago, but it’s really a good group of guys to race with.  It’s a great series to be a part of right now.”

Wight went unchallenged in the final few laps for his first win of the 2022 racing season.

Rudolph challenged Wight as much as he could while keeping his No. 25 on the bottom of the speedway.  He moved forward quickly early in the race before settling in behind Wight and eventually finishing in the runner-up spot.

“After a while it was single-file on the bottom,” mentioned Rudolph.  “There wasn’t much I could do.  We had a good piece.  The track was definitely a little bit different from last night. We’ll see what the rest of the week brings.”

Pauch was unable to rebound late forcing him to be happy with a third place effort.  It wasn’t the finish he wanted after starting on the outside of the front row.

“You hate to go backwards after starting second,” said Pauch Jr.  “We had a good car all night.  Race tracks are like race cars; sometimes things change, sometimes it’s good and sometimes it’s bad.  Tonight was a little bit difficult, but tomorrow night will be better.  I’m happy with a third-place run.”

Danny Johnson started inside the second row before crossing the line in fourth with pole-sitter Danny Creeden rounding out the top five.