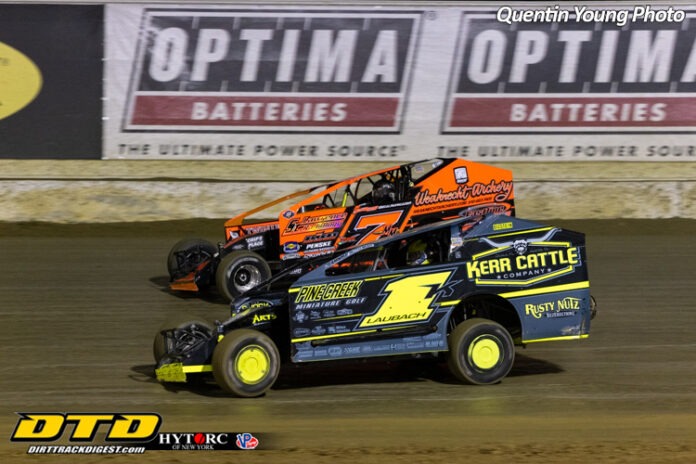 LAKE CITY, FL – Michael Maresca seemingly had a car to win on the opening night of the Sunshine Swing for the Short Track Super Series on Wednesday night.

It wasn’t meant to be as he dropped out early after getting together with a slower car and the wall.  It was a tough way to start the week.

On Friday night, Maresca got his redemption.  Maresca took home his first ever Short Track Super Series win, holding off a late charge from Thursday’s winner Larry Wight for the $6,000-plus payday in the 40-lap event.

“Any time you get win this early in the season it just feels good,” stated Maresca.  “It takes a lot of pressure off.  I just can’t thank my crew enough.  We put a rear clip on this car this morning.  We had some luck all week and just kept fighting.”

Rick Laubach held the lead over Maresca through the early stages of the 40-lap feature event, with Laubach low and Maresca floating around the middle.

After the first yellow on lap seven, Maresca got by Laubach, but a lap 10 restart saw Laubach return to the top spot.  However, Maresca finally got the top to where he needed after a couple green-flag laps, returning to the front on lap 12.

Behind Laubach, a battle between Billy Pauch Jr., Wight, and Erick Rudolph was heating up. The trio ended up swallowing Laubach, with Pauch now in second over Wight as the halfway mark came closer.

Pauch began to catch Maresca, and a lap 24 yellow seemed to fly in Pauch’s favor, but Pauch shoved and slipped to fifth when racing resumed. This put Wight up to second, tasked with chasing down Maresca.

Wight closed in, a carlength back with five laps remaining, but Maresca’s line was gradually changing from the middle to the bottom.

“Everything was able to go my way,” Maresca said. “We got out to a lead, and at the end my car definitely started to fade. I moved back to the bottom and saw the lead open back up a bit, but I was definitely struggling some towards the end.”

Wight nearly backed up his first Short Track Super Series win from Thursday with another on Friday, but ultimately had to settle for second after a late charge.

“I was really tight at the beginning, I swear it took 30 laps for my right front to come in,” Wight noted. “Once it came in, I could finally turn down and cut the corner like I needed. We were really good on the bottom, but think I need to go kick Russ King in the nuts for signaling to Mike to get down there. Mike is a great competitor and a very clean driver, a class act, and definitely enjoy racing him for wins.”

Rudolph has been a regular visitor to the front at All-Tech. A win in 2020 carried over to speed in 2022, with a fourth on Wednesday and second on Thursday. On Friday, Rudolph kept his average finish stagnant with a third.

“We’ve had a lot of consistency down here so far,” stated Rudolph. “We’ve been on the podium frequently which is always a good thing. With all the different conditions its a testament to the speed we’ve had to be fast in all of them.”

Pauch Jr., was able to regroup and continue his strong week with a fourth-place finish while Stewart Friesen drove back through the field after causing an early caution to finish in fifth.