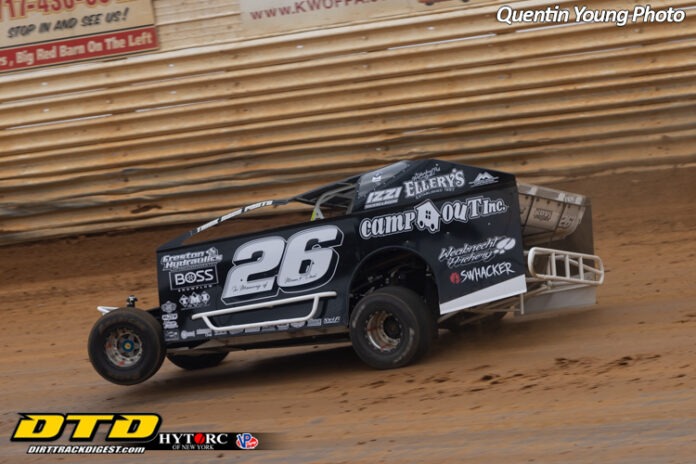 PORT ROYAL, PA – Sometimes you just got to ride the wave.

That is exactly what Ryan Godown is doing as he went back-to-back on Sunday afternoon with the Short Track Super Series at the Port Royal Speedway. The Ringoes, N.J., driver earned his 10th career win after a last lap pass propelled him to the Speed Showcase 40 checkered flag. It was his second series victory in a row after a win last month at Cherokee Speedway in the Elite Series opener.

The race behind the top two was intense as Mike Mahaney, Stewart Friesen, Godown and others battled for the third position.

Gular led with Horton second when something let go on the Halmar No. 43 ending his day as he rolled to stop in turn two with heavy smoke billowing from his car. This moved Mahaney up to second and Friesen to the third position.

At the green, Gular kept the lead through turns one in two as Friesen hounded him. Friesen went to the high lane as Gular worked low through turns three and four. This gave Friesen a clear shot off of turn four to take the lead on lap nine.

Friesen was driving away as Godown and Gular worked each over for second. Gular eventually surrendered the position to Godown on lap 14.

Caution came again with 15 complete as Jared Umbenhauer slowed with problems. Under the yellow, Friesen’s No. 44 came to stop on the frontstretch. He was pushed to the pits handing the lead over to Godown.

On the ensuing restart, Gular was able to take the lead through turns one and two, with Godown retaking the spot to take back as they excited turns three and four on lap 16.

With 20 laps down, Godown continued to keep up enough of a pace to keep Gular and others behind him.

Gular started mounting pressure on Godown a handful of laps later. Gular slid up in front of Godown in turns one and two on lap 25 with Godown driving back around him to the lead off of turn four once more.

A lap later, Godown couldn’t contain Gular. Gular made the move off of turn two utilizing the middle lane before finishing him off in turns three and four on lap 26.

A handful of cautions slowed the pace between lap 30 and 33, but Gular remained in the top spot after each and every restart.

Green flag laps at the end of the race was what Godown needed. He stalked Gular over the final five laps before making his move on the final circuit.

Godown went to the top of turns one and two with Gular sliding through the middle. Godown found enough bite out by the wall to make the pass at the exit of turn two. He slid down in front of Gular down the backstretch to keep the lead through turns three and four.

Godown beat Gular to the checkers to pick-up the $5,000 payday.

“I kept getting closer and closer to that wall,” stated Godown. “If I could get above that hole, I could get a good run. I just got enough confidence those last three laps, I just kept getting a good run off of two and I got behind him and I kept letting off. I didn’t want to show myself too early. I got a heck of a run next to the fence that last lap.”

Gular still managed a smile after the feature after giving up the lead on the last lap. It was a much-needed turn around for Gular after problems at Cherokee Speedway. He didn’t realize Godown was that close until he made the pass.

“He threw the Hail Mary there and got me,” stated Gular. “I didn’t hit a bad lap, thought I hit a pretty good lap. He surprised the hell of me to be honest.”

Michael Maresca was consistent throughout after starting 12th. He steadily worked his way forward to complete the podium at the checkered flag.

“They had me covered,” said Maresca. “We were a little free there. I second guessed myself a bit. We didn’t tighten up enough and I was just hanging on at the end.”

Mat Williamson finished in the fourth position after starting fifth with Matt Sheppard coming from 11th to finish in fifth.