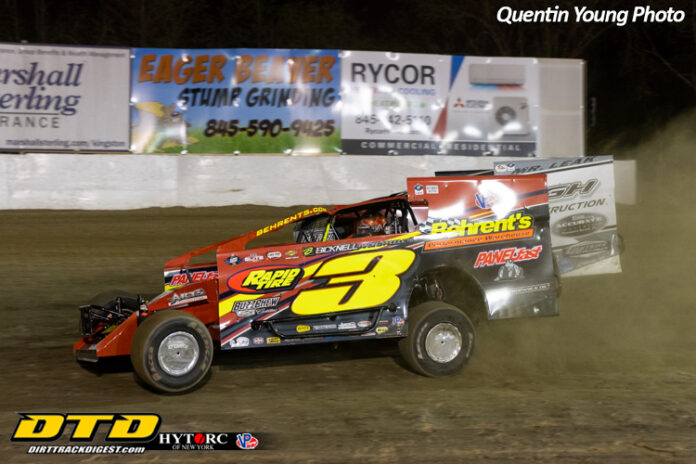 ACCORD, NY – With more than $6,000 on the line, Mat Williamson etched a new track on his win list, capturing Tuesday night’s ‘Battle of the Bullring 9’ at the Accord Speedway as part of the Bob Hilbert Sportswear Short Track Super Series (STSS) Fueled by Sunoco River Valley Builders North Region championship.

The win is Williamson’s third in STSS competition – the first at a track not named Port Royal (Pa.) Speedway – and boosts him into the point lead after earning a podium finish during the North Region opener at the Orange County Fair Speedway in Middletown, N.Y., in April.

Williamson led from the jump, launching into the lead from his outside pole starting spot before eventually losing his advantage to Dan Creeden in lapped traffic. After contact on a lap-21 restart, Williamson snatched the lead back and cruised to the $6,300 payday, ahead of Creeden, Andy Bachetti, Bobby Hackel and Danny Tyler.

“The race car was really good tonight,” Williamson said in Victory Lane. “I’ve always wanted to follow the full Short Track Super Series and have to thank Jeff (Behrent) and my team for giving me this opportunity.”

On the initial start, Williamson led Creeden, Dillon Steuer, Chris Stevens and Bachetti with Hackel and Brett Haas just behind. Right as the battle for the lead was shaping up around lap seven, and as Williamson and Creeden were inching toward lapped traffic, the caution flag flew for the first time.

The tightest battle throughout the first 10 laps was for fifth when Bachetti and Hackel were duking it out before Hackel eventually took the spot and made it a three-car battle for third with Steuer and Stevens.

Back up front, Creeden narrowed the gap on Williamson as the race neared the one-quarter mark. Williamson crawled closer to the back of the field, moved to the bottom and Creeden had his chance to pounce. Creeden used the outside and drove around Williamson off turn four to lead lap 17 before another caution lap 19.

On the ensuing restart, Bachetti flew to the outside and drove from sixth to fourth, sidestepping both Hackel and Stevens before another yellow flag two laps later setting the stage for the moment of the night.

When green lights returned, Williamson fired off the bottom, drove deep into turn one and banged rubrails with Creeden as they exited off turn two. Bachetti, who restarted fourth, crossed over after the contact and rocketed into second down the backstretch, ahead of Creeden, Hackel, Steuer and Stevens.

Two laps later, on lap 23, Creeden returned to the runner-up spot, taking second from Bachetti before the final caution on lap 28.

Williamson picked a perfect time for his best start of the night and quickly put ground between he and Creeden. Behind the top two, Bachetti and Hackel settled into third and fourth with Tyler moving inside the top five for the first time.

With 10 to go, Creeden closed the gap as he and Williamson maneuvered lapped traffic, but when Williamson, aboard his Behrent’s Performance Warehouse No. 3, sliced through the middle of a pair of slower cars, he had open track to cruise to the win.

“Lapped traffic got me in the beginning,” Williamson mentioned, alluding to Creeden’s pass for the lead early in the race. “We went with a little different tire tonight and I was able to wait and was really good in the end.”

“It’s solid, it just sucks for all my guys,” Creeden said while parked on the front stretch. “We’ve got nothing compared to these big money teams and look where we’re at.”

Bachetti, who has plenty of laps at Accord but fought an illness all week, finished third.

“Really good night for us,” Bachetti said in front of a sizable crowd. “Accord is usually good to me, but we haven’t been here in awhile and the racetrack hasn’t been raced on, so it was anybody’s guess.

Hackel scored his best career finish on the STSS tour in fourth with Tyler following to round out the top five.

Finishing sixth through 10th, respectively, were: Steuer, who raced inside the top-five for much of the evening; three-time ‘Battle of the Bullring’ winner Anthony Perrego advanced from 17th to finish seventh; Mike Mahaney in eighth coming from 13th starting spot; Stevens, after a really promising first portion of the race, managed a top-10 result in ninth; and Craig Mitchell, another car up front all night, finished 10th.

Heat wins, worth $100 each thanks to the Northeast Racing Happy Hour with Predmore and Murns, went to Steuer, Tyler, Creeden, Williamson and Jerry Higbie.

A solid 43 STSS Modifieds checked into the pit area for the event.

In the STSS Crate 602 Sportsman event – the opener for the Precision Hydraulic & Oil North Region – Brian Krummel outdueled Steve Davis for the $1,500 victory.

Davis wound up second, Justin Comes finished on the podium in third, and Tyler Johnston and Doug Kline rounded out the top five.

In just one week, the STSS River Valley Builders North Region returns to action at the Outlaw Speedway (Dundee, N.Y.) on Tuesday, May 17.

Another week later, the Hurlock Auto & Speed Supply South Region revs back to life at the New Egypt Speedway (New Egypt, N.J.) on Tuesday, May 24.

‘BATTLE OF THE BULLRING’ RESULTS SUMMARY – ACCORD SPEEDWAY MAY 10, 2022