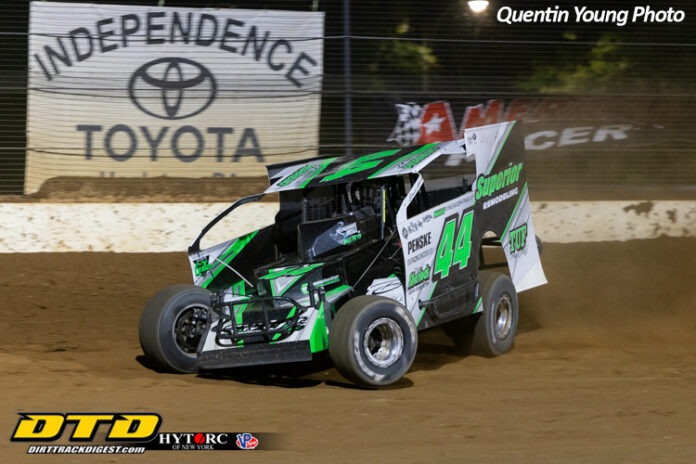 Bouc and Matt Stangle led a 28-car field to the green flag. Off the start, Bouc led the way with Stangle. Behind them, Mike Gular passed Mat Williamson for third. The race quickly ran into its first yellow on lap three after Mike Trautschold ended up sideways in turn one. On the restart, Stangle got ahead of Bouc to take the race lead. Behind the top two, Williamson reclaimed third place from Gular and tried to race the two leaders. However, a lap five yellow flew for an out-of-place uke tire off the backstretch slowed the field once again.

Stangle led Bouc once more off the restart, but the yellow flew for Matt Sheppard slowing on the backstretch on lap six. The restart mirrored the restart from a lap prior, with Stangle once again showing the way. The field settled in for a stretch of green flag racing, with Stangle and Bouc pulling away from the rest of the field. Behind them, a three car battle started brewing for third. Perrego and Billy Pauch Jr. passed Mike Gular for fourth and fifth on the restart, setting up a battle between them and Williamson for third. Williamson held on to the spot through lap traffic until lap 17, when Perrego and Pauch Jr. each got past Williamson to move up to third and fourth.

The 14-lap green flag run ended with a lap 20 caution for Max McLaughlin stopping on the bottom on the front stretch. The field came off of turn four for an attempted restart, but Stangle’s night came to an end as he broke in front of the field. Everyone in the outside lane stacked up, causing a few cars to suffer damage. Tanner VanDoren had to go pitside. Meanwhile, Mat Williamson pulled off and headed pitside. Williamson restarted fifth and appeared to have no contact with anyone on the no-start.

Bouc and Perrego brought the field back to green on a clean second restart, with Pauch Jr. close behind in third. The top three built some breathing room between themselves and the mid-pack. Sheppard was on the move after his issue on lap six. By lap 28, Sheppard had cracked the top ten and started to work on ninth place runner Frank Cozze. The race slowed down once again on lap twenty-nine after Andy Bachetti slowed on the frontstretch with a flat right rear.

Bouc was challenged by Perrego on the restart, but Bouc held on to the lead. Behind them, a hornets nest of a battle for fourth. Ryan Godown got around Mike Gular and then promptly passed Alex Yankowski for fourth. While that battle was going on, seventh place Jeff Strunk was doing his best to hold off Mike Mahaney and Sheppard. Strunk faced challenges high and low from Mike Mahaney, who was trying to keep Sheppard behind both of them. Mahaney and Sheppard were unable to pass Strunk before a lap thirty-four yellow for Mike Trautschold spinning.

Perrego got the best of Bouc on the restart, clearing the No.32 down the backstraightaway, Perrego was not able to keep the lead due to a yellow for third place Billy Pauch Jr. The No.96 came off the pace on the top-side of turn three and needed to be pushed off the speedway. On the second attempt at a restart, Perrego once again got around Bouc to claim the lead for good. The field only managed a lap before Bobby Hackel and Cale Ross came together to bring out the yellow on lap thirty-five. After the first restart was called back, Perrego bested Bouc on the restart to hold the lead. Godown followed Perrego through turn one to get around Bouc for second.

The race went green flag for the remaining 14 laps. Perrego and Godown streaked away from Bouc, who came under heavy pressure from Matt Sheppard late. Perrego claimed his ninth career Short Track Super Series win, with Godown, Bouc completing the top three. Sheppard rebounded from a difficult night for fourth, and Gular nursed a damaged No.2a to fifth with a flat left front.

Perrego had a hard charge through the field to take victory. Perrego started 9th and battled his way forward early to put himself in a good position to claim a North/South Region win.

“We were really good in traffic early”, said Perrego. “We found something while running in fourth. I hated to see that first yellow while in the top five, but it ended up helping us out. It was a great race with Danny Bouc, but once we got the lead we were pretty good.”

The Bloomsburg Fair Raceway had some slight changes made to the track’s configuration in the year it has been since the Short Track Super Series has raced there. Banking was added to the top of the turns, which in turn made for a wider racing surface.

“The top was way faster than the bottom in three and four especially”, said Perrego. “We were able to sneak by some guys on the bottom on a few restarts. On the longer green flag runs, I felt pretty good rolling through the middle. It was certainly a top dominant track for most of the night, but we passed a lot of cars.

Perrego’s absence from the Outlaw Showdown just under a month ago surprised many. However, race fans can expect the No.44 to be touring with the Short Track Super Series from here on out.

Ryan Godown started a row ahead of Perrego in seventh and ended up coming home second. It was a strong run for Godown and team, especially considering that Godown considers sail panels one of his biggest weaknesses.

“The sail panels threw us a curveball tonight, it was a little asterisk on our schedule all year”, said Godown. “Our window program has given us great cars anywhere we go, but with sail panels we just aren’t there yet. We haven’t found the right balance yet anywhere. There were a lot of cars faster than us for the first twenty laps or so, so I stayed patient and waited to see what the car was going to give me. After the mid-point of the race, guys started coming back to me. Our car stayed the same, we never really fell off. We got some great notes tonight to take into our future sail panel races.”

Godown has expanded his program this year. From windows to sail panels and American Racers to Hoosiers, Godown has been running a little bit of everything this year. He’s found success, but the different rule sets create a challenge for the Godown team.

“It’s so hard to find a happy medium with the different programs”, said Godown. “We hope to go to the track weekly and find some consistency and build from there. We have a great group of guys behind this team. Stephane LeFrance from Trick Race Parts and Mike Carlucci have helped work with us setup-wise. My brother and the rest of my crew have been great; my brother does all the motor work and my crew keeps our program up to snuff. We all have jobs during the week, so it’s a lot of late nights in the shop to keep this program rolling.”

“You hang your head on second, but you really can’t hang your head on second”, added Godown. “We got a lot of great stuff for our notebook and got a good result out of a not-so-great car. We don’t run a lot of North Series races, so maybe we’ll run a couple more to get faster with the sails. We capitalized on some restarts at the end to get up front. I thought the track was way better this year after they added some banking. There’s some little improvements to be made, but they’ve gotten the surface better every time we’ve come here and that’s all you can ask for.”

Danny Bouc had a roller coaster of a race. Bouc seemed settled in second place behind Matt Stangle, but that all changed when Stangle broke on lap twenty. Bouc held the lead and second for as long as he could, but Perrego and Godown proved to be just a little too strong late. He held off Sheppard for third, which is quite the impressive run for a spec small block.

“I let Stangle go early in the race”, said Bouc. “I knew it was a long race, and he was running the top very hard early. Once we hit lap traffic, I ran him back down so I knew I could get to him eventually. But then he broke, so that ended up being some good luck for us. We got eaten up on the restarts by Anthony [Perrego], he was really good. He probably would’ve got us either way, but if we didn’t have as many cautions, I think we would’ve had a good shot at winning this. We’ll gladly take this though, it’s a great run.”

Bouc’s luck and the draw and pacing himself out front helped keep his No.32 in the front of the field all race long. While other drivers ran their cars hard and wide open around the 3/8ths mile bullring, Bouc stayed patient. Many of those drivers paid the price, with all sorts of mechanical issues for a wide variety of drivers throughout the field while Bouc made the podium.

“I was hoping we could crank a win off tonight, we usually don’t draw this good at all”, said Bouc with a laugh. “We’re usually stuck in the back with our draws. It’s a tight bullring and sometimes a little tough to pace, so I’m sure those guys were breaking all sorts of stuff tonight. I think we put a pretty good show on up front for the fans. This is a neat little place, anytime you see someone build a new racetrack like this you want to support it. This doesn’t happen very often.”