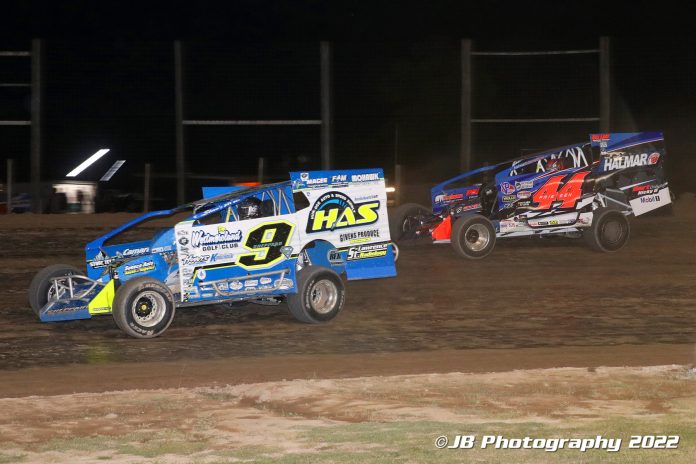 For the sixth time this season on the Bob Hilbert Sportswear Short Track Super Series (STSS) Fueled By Sunoco, Matt Sheppard was triumphant, this time at Utica-Rome Speedway.

Sheppard raced from his 22nd starting position to claim the $6,100-plus payday in the ‘Richie Evans Remembered 61,’ which was his seventh of the season at his Friday night home track in Round No. 7 of the River Valley Builders North Region.

“I kind of stalled out in the middle there, but the track started blowing off and when that happened, we started rolling really good,” an elated Sheppard said of his charge to the front.

Williamson raced out to the front of the field while Edwards, N.Y.’s Tim Fuller quickly occupied the runner-up spot after getting by Haas on the initial start.

Gloversville, N.Y.’s Rocky Warner was on the march in the early going, racing from the ninth starting position into the top five just six laps into the 61-lap affair.

Three laps later, Fuller used the inside groove to drive underneath Mat Williamson and take the lead just as the field completed the ninth circuit.

Stewart Friesen was looking to join Fuller up front, as he raced by Williamson one lap later for the runner-up spot after starting in fifth.

The race’s first yellow flew on lap 13, as Ransomville, N.Y.’s Erick Rudolph slowed to a stop at the entry of the third turn.

Fuller raced back to the lead on the restart, but his lead was short-lived. Friesen began to use the outside groove, finding speed at the top of the speedway and driving around Fuller on lap 17.

With Friesen setting the pace at the front of the field, Sheppard was continuing his charge through the field. The next yellow fell on lap 26 after Alex Yankowski had mechanical problems, parking his No. 84Y over the turns one and two banking.

With the race just short of the halfway mark, Friesen was leading Fuller, Williamson, Warner, and Haas, with Sheppard lurking in the seventh position.

The following restart was a key one for Sheppard, as the Savannah, N.Y., resident drove underneath Haas, Williamson, and Jessica Friesen to get to fourth by the completion of the 26th circuit.

Two laps later Sheppard used the outside line to get around Warner for a podium position. Sheppard then cleared Fuller for the runner-up spot as the field completed lap 37.

The race’s next yellow fell on lap 41, giving Sheppard the opportunity he needed to take the lead away from Friesen. Sheppard used the outside line to get around Friesen, taking the lead away for good.

Sheppard led the remaining 20 laps to pick up his sixth STSS victory of the season and extend his lead atop the River Valley Builders North Region standings.

“I saw him sneaking up the leaderboard and didn’t know if we’d have enough to hold him off. When he got by us on that restart it was game over after that,” said Friesen of his runner-up finish.

“Keeping this company? There are no complaints for us,” said Rocky Warner, who rounded out the podium finishers. “To be racing with the guys we were battling shows we’re gaining ground.”

Williamson came home fourth in his Behrent’s Performance Warehouse No. 3, remaining within shouting distance of Sheppard atop the North Region point standings.

Baldwinsville, N.Y.’s Jimmy Phelps rounded out the top five after starting in 10th, his best career STSS finish aboard his HBR No. 98H.

Finishing sixth through 10th, respectively, were: Fuller, who faded late to finish just outside the top five; Anthony Perrego, who came from the consolation piloting his Brian Smith-owned No. 44 car; Marc Johnson, who advanced from 16th starting position to race into the top-10 late; Ronnie Johnson, who went back and forth for much of the 61-lap affair; and Max McLaughlin, matching Ronnie Johnson with an up and down night to round out the top ten aboard his HBR No. 8H ride.

Thirty-eight STSS Modifieds signed in to compete in the ‘Richie Evans Remembered 61.’

Janczuk came from the ninth starting position to outduel Payton Talbot on a lap-12 restart for the win in Round No. 5 of the Precision Hydraulic & Oil North Region.