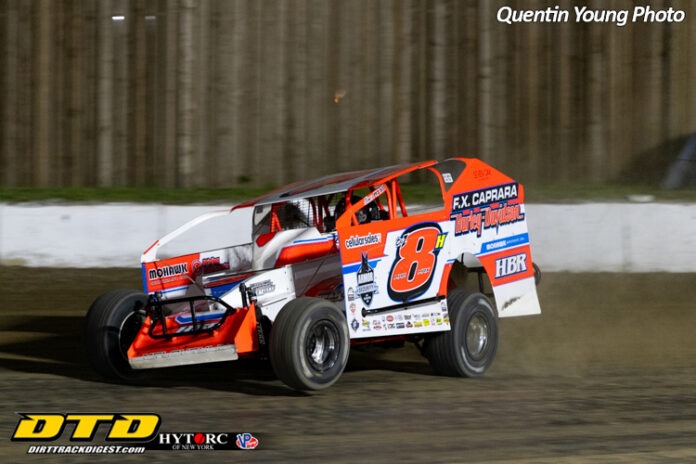 Decker, of Unadilla, N.Y., grabbed the lead early in the first event and drove away for the victory after getting by Thursday night winner Jack Lehner.   He was good, but felt like he needs to be better on Saturday to be in the hunt for a win.

“We were all right there,” said Decker.  “We need to make a couple changes I think for when the track completely blows off.  Hopefully make the changes to go in the right direction, but you know I’m just happy to get a win.”

Decker paced early on the bottom before electing to utilize the outside lane in turns one and two.  That made the difference as that’s where he was able to make the move for the lead after a restart.

“It was a little bit slimy when we were packing there, so I was a little reluctant to go up there,” said Decker.  “That caution came out and I went up there and I felt pretty good.  It was still a little slimy up there in three and four so I didn’t use that.  If you can steer left, you get a little brave so you go up there and make it happen.”

Stewart Friesen had a lot on his mind after winning the second qualifying event over his wife Jessica.  Unfortunately, Jessica has some engine issues that have the team scrambling a bit.

“Our race was pretty good,” said Friesen.  “The 1z (Jessica) has more motor problems so that’s kind of a bummer for the whole deal, but proud of the Halmar team.  We just got to work on the motor department. It’s a bummer.”

The win puts Friesen, a former Fonda 200 winner, into the redraw tomorrow for a top 12 starting spot for the start of the 200-lap affair.

“I’ll have a good look at the front and be able to pace a little bit tomorrow,” said Friesen.  “We’ll see what the track does tomorrow. It’s in really good shape right now. We’ll just try to set ourselves up as best we can for the second part of the race.”

McLaughlin Runs Away with Qualifier #3

For a Fonda outsider, McLaughlin looked stout in the third 15-lap qualifying event running away from Anthony Perrego and Matt Sheppard.

“We have a good car right now,” said McLaughlin.  “This Mullins powerplant is really, really good and that always helps.  Our Deyo car has been really fast everywhere.   We lost brakes on lap 15 at Utica.  I felt like we had a shot to win there too. You know, we are going to try to make it a little bit better and hopefully give these guys a run for their money tomorrow.”

McLaughlin admits Fonda isn’t one of his better tracks.  He has limited experience at the Mohawk Valley oval.

“I’ve never really been that good here,” he said.  “It’s not one I circle on the calendar at the beginning of the year, but with the speed we’ve shown here lately and how good this car is, it’s going to be a really fun 200 laps.”

Bobby Hackel made the Fonda Speedway home midway through the 2022 season.  He’s improved each time out and on Friday night he held his own to win the final qualifier to lock into the redraw for Saturday’s 200.

“It feels amazing,” said Hackel.  “Last year at this point I was starting on the front row of a consi so we’re way ahead of the game compared to that. I got really good equipment under me right now and everything I need to get the job done. I just got to capitalize on that and keep working with the people that are helping me move forward. Pete Chuckta from PMC, Jason Barney at 87 Speed and then Killer Crate.”

Thursday night he led much of the Ultimate Underdog 33 lap feature before Jack Lehner got the lead away from him late.  He kept everyone else at bay to earn a solid second place finish.  That run and finish was a nice way to kick-off the weekend.

“I’ve been here the last quarter of the year because I’m going to try to make this my home next year,” said Hackel. “That built us up.  I haven’t had bad nights, but you’re going to have that just jumping into a new track.  Last night (Thursday) was more about track time on the weekend. I’m racing to have a good run and capitalize on things.”

1st career win in the division at Fonda for Ely

1st career win in the division at Fonda for Tranka