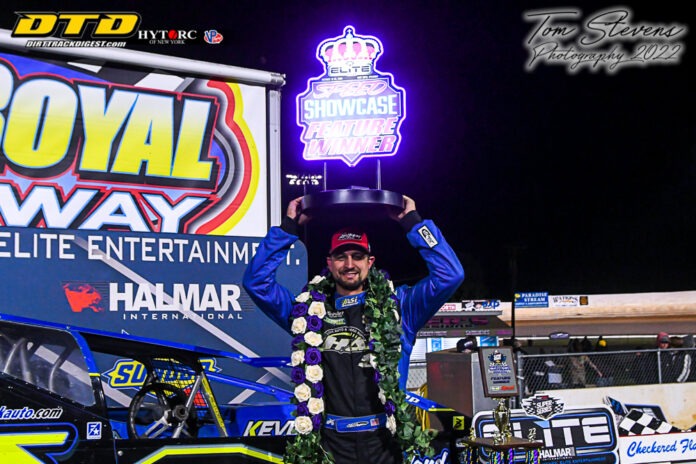 PORT ROYAL, PA – Matt Sheppard grabbed the win in a dramatic Speed Showcase feature at Port Royal Speedway, using a last-lap pass to steal the $50,000 payday from Stewart Friesen. After an early flat, Sheppard charged from outside the top 30 to nail down another crown jewel victory.

Jimmy Phelps was in his own area code at the start of the 75-lap event, putting a whole straightaway between himself and the battle for second by lap ten. As Anthony Perrego emerged from the battle with the second spot, the yellow waived for Sheppard heading to the pits with a flat right rear on lap 15. Perrego hung somewhat close to Phelps when racing resumed, the only car at the time capable of comparing to Phelps’ pace.

Behind Phelps and Perrego, Friesen was on the move in a hurry. After starting 24th, Friesen reached sixth prior to a lap 28 caution. On the restart, Friesen went to the cushion in turns one and two to drive straight to second. Three laps later, Friesen rolled around the outside of Phelps for the lead.

Phelps kept Friesen within striking distance for a bit, but as the top two hit traffic, Friesen slowly pulled away. A yellow on lap 51 erased the traffic and reset the gap between Friesen and Phelps. Meanwhile, Sheppard’s run to the front was slowly gaining momentum, just outside the top ten at the two-thirds mark of the event.

As the laps clicked off, the leaders migrated to the bottom. Tire wear was becoming a problem, but was less of a problem for Sheppard who had 15 fewer laps on his right rear tire. Sheppard went to the top lane and slipped by a couple cars, reaching fifth by lap 60. Lap 62, Sheppard got around Larry Wight for fourth, then a lap later around Perrego for third. With ten laps to go, Sheppard drove around Phelps for second.

A final yellow with six to go set up a dash to the finish. Friesen went low, Sheppard high, and Sheppard built up momentum. Sheppard pulled even with Friesen with a lap and a half left, and utilized a massive run around the top of one and two to fly by Friesen on the final circuit. With the checkered waiving, it was Sheppard pulling off a last-lap pass to score the $50,000 payday. Friesen came home a close second, with Phelps, Perrego, and Alex Yankowski completing the top five.

“I’m speechless,” Sheppard said. “I didn’t feel that great early, got into the wall off of two and flattened the right rear. We went to the back of the field, I felt okay but I was really getting jammed up there and wasn’t going anywhere. I didn’t even know if we had a car to get a top ten, let alone win. I found that top, once I could get by myself and get some open race track, I could carry a lot better speed. I have to thank Stewie, he raced me clean. He gave me room, he could have slid up and stuck me in the wall but he didn’t and raced me clean. What a wild last lap.”

At the end of the feature, about three quarters of the drivers migrated to the bottom. With a small amount of rubber and practically zero tread left, the drivers needed that little bit of rubber just to hang on. Sheppard, with more tread, was able to make time by blasting around the top.

“I was okay on the bottom, but not great, not as good as a lot of the other guys,” stated Sheppard. “For whatever reason, I could carry a lot of momentum up top, but needed open race track. The more the guys migrated to the bottom, it gave me the top to do my own thing. The longer we were up there, the faster and better we got. I can’t even count how many times I bounced this thing off the wall, but it held together for 75 laps.”

Friesen has not visited victory lane since the STSS Elite Series race at Utica-Rome on Labor Day weekend, a dry spell by his standards. Friesen fell about half a lap short of returning to victory lane, but Sheppard had other plans.

“We just ran out of tires there,” Friesen said. “That’s it, I’m proud of my whole Halmar team, we had a really good race car. Hats off to Matt and his crew, his strategy was right and we got burned by it.”

Phelps had never raced at Port Royal Speedway prior to this weekend, and he showed good speed all weekend. Phelps won his qualifier on Friday and led 31 laps in the feature en route to a P3 finish.

“We had a really good car, but these two were a little better when it counted,” Phelps noted. “We’ll go back and put it in our notebook to try and get a little bit better for next time. We missed it just a little bit but we had good track position and we’re able to hang on to a podium, so we’re happy.”