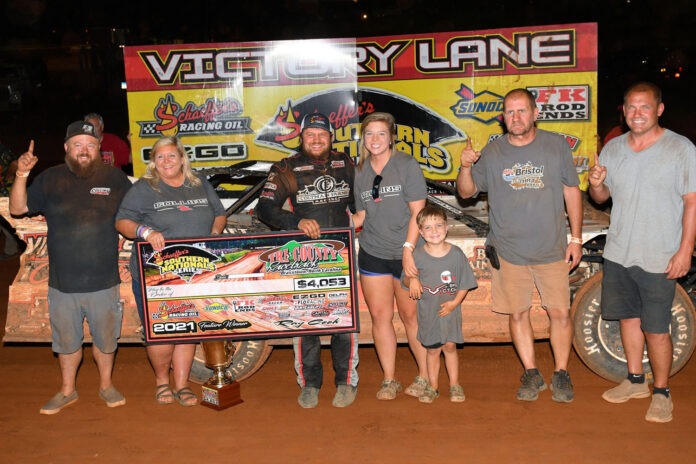 BRASSTOWN, NC –  Capitalizing on the misfortune of front row starters Jensen Ford and Dale McDowell, Colbert, Georgia native Kenny Collins assumed the point on the sixth circuit and proved to be the class of the field in capturing the $4,053 top prize tonight, July 27 at Tri-County Race Track! Kenny, who started third on the feature grid after clicking off the second quickest lap in Group A during qualifying, then pulled away following a lap 33 restart to claim his first career Schaeffer’s Oil Southern Nationals triumph by a wide margin of 5.010 seconds. Kenny also became the sixth different winner so far on the miniseries in the six events that have escaped the wrath of Mother Nature and now finds himself solidly in the Championship hunt.

Point leader Donald McIntosh, who was once again behind the wheel of a #4T machine usually driven by Blount Motorsports teammate Tommy Kerr, advanced from his fifth starting spot to finish a strong runner-up behind Collins. Leading Dirt Draft Rookie of the Year contender Cody Overton pressured McIntosh throughout the 40-lap affair, but settled for a third place podium performance after starting seventh at the Brasstown, North Carolina bullring. Local favorites Shawn Chastain and David Payne rounded out the top five of the entertaining contest.

Both front row starters unfortunately ran into issues early in the headliner and fell out of contention for the win. Polesitter and New Track Record holder Jensen Ford spun in between turns three and four on the second attempted start of the race and was forced to restart from the tail of the field. The Johnson City, Tennessee driver wound up finishing the last car on the lead lap in the tenth position.

Outside polesitter Dale McDowell then jumped out to the early race lead, but got hung up briefly with the lapped car of Craig Greer on the sixth lap and the caution flag flew before the two were separated. With McDowell not stopping on the racetrack, the blend-in rule came into effect and series officials placed the Chickamauga, Georgia Hall of Famer starting eighth on the restart. He was ultimately able to battle back to contend for a top five showing – eventually crossing the finish line in the sixth spot.

“This is my favorite racetrack and man it feels good to win one of these races,” quoted a jubilant Collins following the event. “We’ve spent a lot of money through the years trying to race these Super Late Models and anyone in the pit area can win one of these things. It’s so hard to reach victory lane and I can’t thank my family, crew, and sponsors enough for all of their help and support!”

Round nine of the Schaeffer’s Oil Southern Nationals Series drew a 19 car field to Tri-County Race Track for the Tuesday night tussle. The feature grid was entirely set by the qualifying session and each entrant advanced into the A-Main. Special thanks to Jerry Smith of Memory Lane Classic Car Museum for putting up $1,100 extra dollars during time trials, which was awarded to fast qualifier Jensen Ford ($500), second-quick Dale McDowell ($300), third-quick Kenny Collins ($200), and fourth-quick Donald McIntosh ($100).

The Schaeffer’s Oil Southern Nationals Series regulars will enjoy one final day off on Wednesday before the Championship stretch takes them back to the Peach State on Thursday, July 29. The miniseries makes its return to Boyd’s Speedway in Ringgold, Georgia for round 10 of the tour. Another $4,053 winner’s check will be on the line on Thursday evening at the Chattanooga-area oval. Previous Southern Nationals victors at Boyd’s includes: Randy Weaver (’14), Casey Roberts (’15), David Payne (’16), Brandon Overton (’17), and Vic Hill (’18).