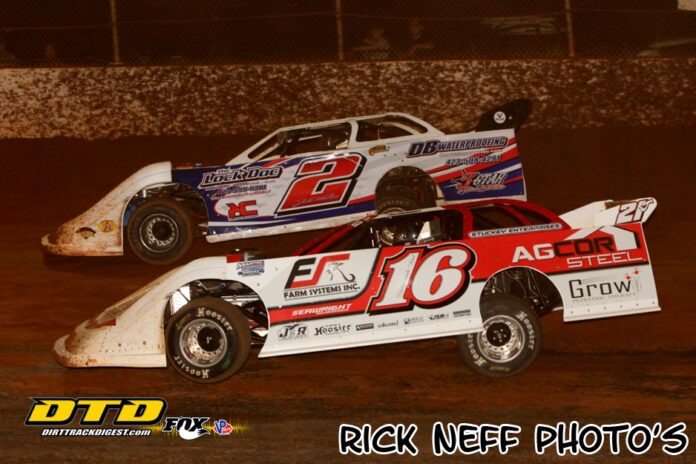 RINGGOLD, GA – Sweeping past Schaeffer’s Oil Southern Nationals Series stalwarts Donald McIntosh and Dale McDowell, 17-year-old upstart Sam Seawright stole the show tonight, July 29 on a rugged racing surface at Boyd’s Speedway! Sam, who locked himself into the fourth starting spot by virtue of posting the second quickest lap in Group B during qualifying, found the high groove to his liking following a lap 13 restart and first overtook Hall of Famer McDowell for second on the fourteenth circuit. Sam, who hails from Rainsville, Alabama, then streaked past series point leader McIntosh on lap 15 to grab a lead that he would never relinquish.

Seawright survived a couple of late caution flags on lap 38 to record the $4,053 payday for his first career Schaeffer’s Oil Southern Nationals Series triumph. McIntosh, who led the first 14 circuits from the pole seeking his first miniseries victory of the year, finished in the runner-up spot – 0.569 seconds behind Seawright’s #16 machine. Outside polesitter McDowell ran in the second spot early in the 40-lap contest before rounding out the podium in third. Jadon Frame worked his way past six competitors to bring home an impressive fourth place effort, while leading Dirt Draft Rookie of the Year contender Cody Overton slipped to a fifth place showing after starting from the inside of the second row.

“The car was great tonight,” stated Seawright while in victory lane at the Ringgold, Georgia oval. “I could see in those ruts that there was so much grip through them. Trust me, I didn’t want to run through them, but I knew that was probably the best way around. I just got that top blowed off over there in (turns) one and two and knew I could probably make it stick for one lap up there. That was an awesome race. I can’t thank all these guys enough.”

Sam became the 44th different driver to win on the miniseries tour, which celebrates its 17th year of existence in 2021. His win tonight also made him the seventh different driver to claim a series victory this year in the seven races that have escaped the wrath of Mother Nature. Sam drove a #16 Black Diamond Chassis with sponsorship from Agcor Steel, J&R Excavating, Farm Systems, Inc., Grow Pediatric Therapy, and Stuckey Enterprises.

With only two point races remaining, both the stakes and the purse money will raise significantly on Friday, July 30 when the Schaeffer’s Oil Southern Nationals Series invades 411 Motor Speedway in Seymour, Tennessee. Round eleven of the miniseries will greet a strong field of competitors tomorrow evening, all of whom will be vying for the $10,053 windfall. Over $30,000 in prize money will be up for grabs and each feature starter will be guaranteed at least $500. Previous series winners at 411 include Randy Weaver (’14), Donald McIntosh (’15), David Crabtree (’16), Donald McIntosh (’17), Cory Hedgecock (’18), Dale McDowell (’19), and Chris Madden (’20). More information on “Tennessee’s Action Track” can be found online at www.411motorspeedway.net.