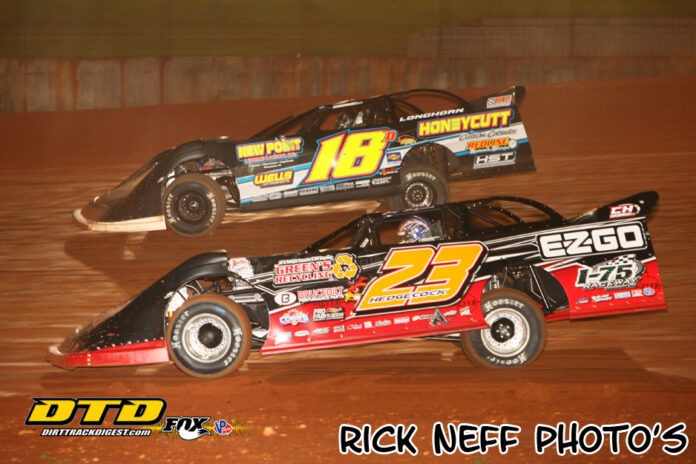 SEYMOUR, TN – Seventh-starting Cory Hedgecock became the eighth different winner in eight Schaeffer’s Oil Southern Nationals Series races this year with a strong performance tonight, July 30 at 411 Motor Speedway! Cory, who stopped the clock second fastest in Group A during FK Rod Ends qualifying, slipped to second in his heat race to finish behind only Pierce McCarter. The Loudon, Tennessee native then turned up the wick on the competition in the 53-lap headliner at the Seymour, Tennessee facility, as he stormed towards the front and eventually overtook polesitter Ross Bailes to grab the point on the fourteenth circuit.

With only one caution slowing the action on the initial start of the contest, Cory was able to drive away from the field to capture the $10,053 paycheck by 4.127 seconds ahead of ninth-starting Randy Weaver, of Crossville, Tennessee. Pierce McCarter overcame a poor start to the race to finish right where he started in the third spot. Series point leader Donald McIntosh battled for the lead early in the distance before falling to fourth, while leading Dirt Draft Rookie of the Year contender Cody Overton rounded out the top five in his Rum Runner Racing entry.

“I know I kind of got behind there in the heat and everything, but I told Dad that we’re going to win this thing somehow,” commented Hedgecock after capturing the five-figure payday at 411 Motor Speedway. “Man, I’m just glad we finally got us another Super Late Model win. It has been a long time. We’ve worked hard on this new car – a Black Diamond – and I have to thank everyone at Stuckey Enterprises that helped out on it. We also have a brand new Eagle powerplant and it drove real smooth!”

The final point event now awaits the Schaeffer’s Oil Southern Nationals Series competitors on Saturday night, July 31 at the bad-fast Tazewell Speedway in Tazewell, Tennessee. Not only will another $10,053 winner’s check be up for grabs, but the Champion of the miniseries will also receive another $10,053 prize. Donald McIntosh, of Dawsonville, Georgia, currently finds himself atop of the point standings and will try to collect the Championship spoils tomorrow evening. Also up for grabs is Dirt Draft Rookie of the Year honors and the extra $1,000, which Evans, Georgia driver Cody Overton is primed to receive in post-race ceremonies.