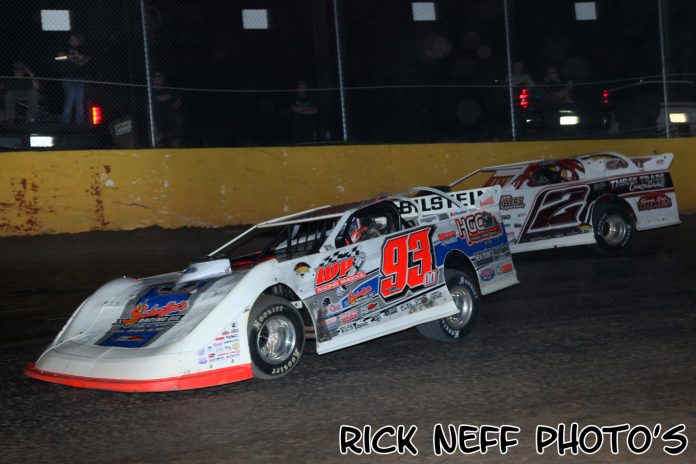 Carson was able to win by 1.474 seconds over runner-up Tyler Millwood, who closed to Ferguson’s rear quarter panel several times early in the contest. Leading Dirt Draft Rookie of the Year competitor Will Roland rounded out the podium in third. Sam Seawright continued his string of strong finishes with the series by placing fourth, while Wil Herrington was the fifth car in the running order to cross underneath the checkers.

The main event took less than twelve minutes to complete with Carson Ferguson setting the torrid pace up front. Twenty of the twenty-three starters were around at the unfurling of the checkered flag, while the top twelve finished on the lead lap. Schaeffer’s Oil Southern Nationals Series point leader Cory Hedgecock rallied past six competitors to finish in the sixth position and Michael Page was also impressive in working his way past eleven racecars en route to a solid seventh place performance.

“I really have to thank (Tyler) Millwood for racing me clean there,” exclaimed Ferguson in Schaeffer’s Oil Victory Lane. “I could hear him for the first half of that race. I felt like I was hitting my marks a little better and figuring out what to do, but I was a little tight on the bottom. I really have to thank the good Lord for giving us a good day, keeping the rain away, and keeping us all safe. Thanks to Schaeffer’s Oil for putting on a good series!”

Even with the threat of rain showers and thunderstorms today, a strong field of 34 competitors piled into the Senoia, Georgia oval for round five of the Schaeffer’s Oil Southern Nationals Series. Tyler Millwood, who showed up late to the track, earned an extra $150 from Memory Lane Classic Car Museum for posting the fastest lap during the qualifying session at a 15.425. With the top five from each group locked in through time trials, the remainder of the field was set by a pair of consolation events, which were won by Austin Horton and Cory Hedgecock respectively. Series regulars John Henderson and Brenden Smith received provisionals to gain access into the 40-lapper, while Joe Denby took use of an emergency provisional to start shotgun on the field

With no rest for the wicked, the cars and stars racing with the Schaeffer’s Oil Southern Nationals Series will head to the historic East Alabama Motor Speedway overnight for Friday’s $5,053 to win throwdown. Tomorrow will mark the fifth-ever visit by the tour to EAMS, but the first since 2013. Jonathan Davenport (’10), Casey Roberts (’11), Chris Madden (’12), and Jonathan Davenport (’13) were the previous series winners at the Phenix City, Alabama facility. More information can be found by pointing your web browser to www.eamsdirt.com.