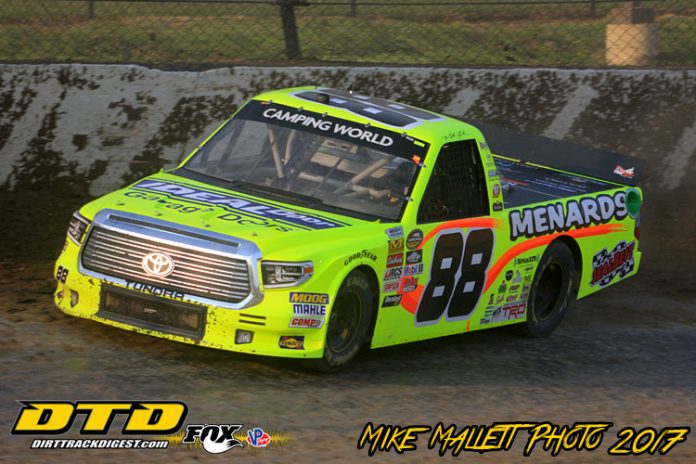 Over the last forty laps of the race, Crafton patiently worked his way from the bottom of the top-10 and took advantage of a Lap 127 caution to position himself to challenge a dominant Friesen for his first win since Charlotte (N.C.) Motor Speedway last May.

“My first dirt win – a lot of fun,” said Crafton, who picked up his 14th career win. “In the second part of that race we down-right just stunk. It was my fault. We over-tightened it a little bit in the first run. It got free and we just went back to the way we started the race.

“I knew I was getting beat down low. Finally, at the end, I said, ‘Well, we may have to tear the right side off to get the win.’ I started doing it and this truck became a rocket ship.”


Friesen, who finished second to earn his career-best finish in the Truck Series, accepted defeat with dignity.

“Congrats to Matt, he’s been doing his homework on the dirt and it paid off,” said Friesen who led a race high 93 laps.

“We didn’t come here to run second that’s for damn sure, but I’m proud of these guys. They worked hard to get this truck dialed in. We had a great truck, he (Crafton) just got rolling on the top, it cleaned up, I was so committed to the bottom and go there in the middle and he just found a line and got us. It burns.”

Pole-sitter Friesen led his first career NASCAR Camping World Truck Series laps and extended his lead to nearly two seconds when a multi-truck accident ignited in Turn 3 on Lap 19 after Sheldon Creed spun and collected at least six other trucks in the process.

With a competition caution set at Lap 20 to allow teams to clean their windshields and grilles of the mud and dirt sprayed during the first run, NASCAR utilized the second yellow flag of the night to serve as the competition caution.

On the Lap 33 restart, Friesen found himself under attack from two-time series champion Crafton who swiped the lead away on Lap 34 and held it through the conclusion of Stage 1 which ended under caution after pre-race favorite Christopher Bell spun and was t-boned by Kaz Grala.

The start of Stage 2 saw the lead exchange twice in a period of three laps as Friesen grabbed the lead back from Crafton only to be passed by John Hunter Nemechek two laps later. Friesen, however, proved that he had one of the strongest trucks in the field by reassuming the lead on Lap 53 and collecting the Stage 2 victory.

Under yellow for the Stage 2 break, Friesen’s spotter noticed that he had a right-front tire going down forcing the No. 52 Halmar International Chevrolet down pit road for four tires and fuel. The unexpected stop handed the lead to 2015 Eldora winner Bell for the Lap 93 restart.

Restarting sixth, Friesen stormed back though the field and eventually caught the heavily damaged truck of Bell on Lap 115 to reassume command at the front.

When it seemed that Friesen was settling into his comfort zone and potentially sailing towards his first career victory, Crafton using a quicker top lane overpowered him on Lap 133, with the pass setting the tone for the final lead change of the night.

Next up for the NASCAR Camping World Truck Series is a trip to Pocono Raceway for the Pocono Mountains 150 on July 29.