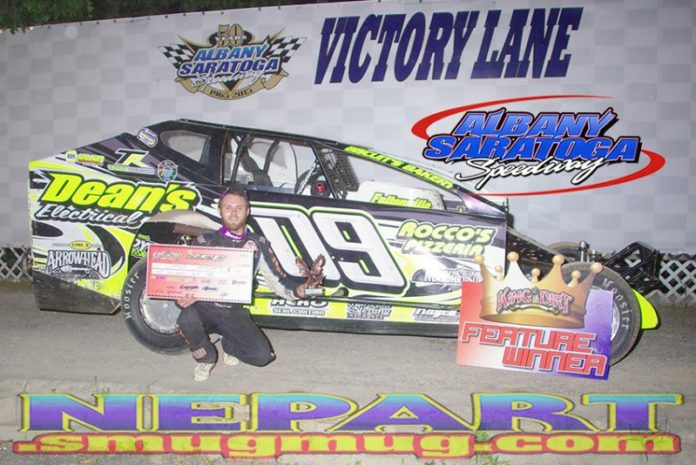 FONDA, NY – King Of Dirt Racing closed the history books on the 2016 racing season this past Saturday night at the Winner’s Circle Restaurant in Fonda, New York during the annual Night Of Champions banquet.

Top honors went to a pair of Kings; Robbie Speed and Connor Cleveland who both claimed championships in their respective divisions. Cleveland claimed his first career Sportsman Modified championship by besting 146 other drivers earning the title King Connor the 1st. Robbie Speed out paced 75 other full-fender Pro Stock drivers earning the title King Robbie the 1st.

After another outstanding dinner courtesy of the Winner’s Circle Restaurant located in Fonda, New York ceremonies began with greetings from series promoter Rob Hazer and series announcer Mike Warren. The pair sat at the front of the ballroom in a unique town hall type setting.

Pro Stock awards were first handed out, with top ten drivers receiving plaques and point fund money followed by interviews with the top three in point standings leading up to an energetic conversation with the champ, Robbie Speed.

“Yeah we were ready to load up at the first race, until my wife settled me down and my crew chief Scott got me focused and we drove from 26th to 1st. From there it was a great season,” Speed said during interviews.

Rob Yetman who scored second place in points had a new nickname bestowed upon him during his entertaining interview saying, “We’ll get one of these championships sooner or later. We had a shot at the Valley, but things can change in a hurry and that flat tire didn’t help during the last race.”

Dean Charbonneau came through with third place in points after the 2016 season and elaborated on closing out strong saying, “This year we were able to close out the season strong at the Valley. Hopefully we’ll get the ticker straightened out and be back on the track in spring.”

Anticipation was high for Pro Stock special award recipients, which was led by Jason Casey receiving the Award Of Excellence and Byron Wescott earning Newcomer Of The Year honors.

“We had a great season. We won four heat races, had a great win during Friday Night Lights, and were able to hold on by six points to earn the title. It wasn’t easy, but my team and I got it done and it feels great,” Cleveland said.

Runner up in point standings David Schilling echoed those thoughts saying, “It was a great battle right down to the last race. I did what I had to do and won in Vermont, but Connor was able to come through with a top 10 run to clinch the title. It was a great battle.”

Michael Sabia reflected on his season expressing gratitude for a third place finish in points by saying, “We had a good year. The one place I thought we’d do better, which was Lebanon Valley, we broke both times. If we didn’t, I may have been able to do better, but we’ll take third among these guys. They’re tough.”

Big winners on the night besides the champion were Adam Pierson, Scott Duell, and Cody Hunt whom all won a pair of awards.

Pierson received the Award Of Excellence in the Sportsman Modified division along with the Hard Luck award after a tough touring season.

Scott Duell earned the Most Popular Driver honors through the King Of Dirt fall madness tournament along with the Hard Charger award for coming from 45th in points to finish 7th.

Cody Hunt had a career year finishing 5th in points and earning both the Redline Graphics Newcomer Of The Year and the Bicknell Racing Products Top Warrior award from Randy Williamson and the folks at BRP. 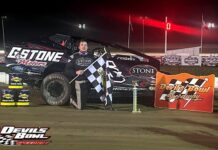 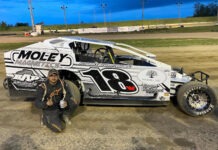 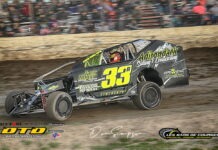