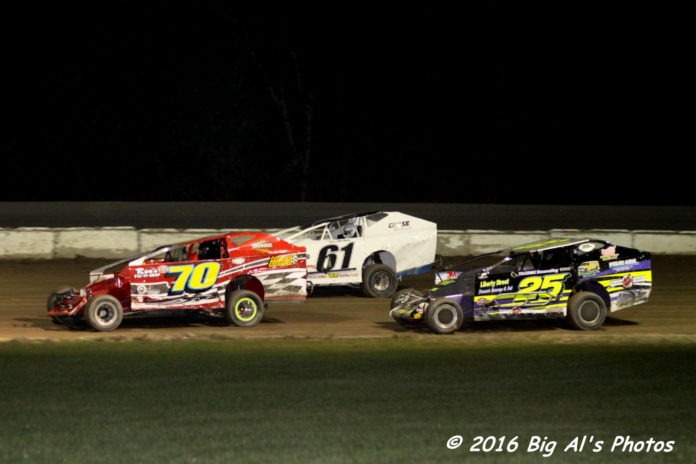 WEST HAVEN, Vt. – The winter months are usually not much fun for stock car racing fans in the Northeast, but Devil’s Bowl Speedway in snowy Vermont is changing that. A weekly live talk show called “Let’s Talk Racing!” – airing every Thursday at 6:30 p.m. on Facebook’s “Live” video platform – has kept fans and racers engaged in an upbeat, interactive program through positive use of social media.

Track promoter Mike Bruno and media director Justin St. Louis host the one-hour show on Devil’s Bowl Speedway’s official Facebook page. Since debuting on December 15, “Let’s Talk Racing!” has become a place to discuss news and information at the Rutland County facility, but the show has not been limited in its focus. The hosts have a list of topics, but viewers are encouraged to have an active part in the show by posting questions and comments during the broadcast. Several drivers have been guests, and a few episodes have been broadcast live on location from drivers’ race shops and garages. The planned guest for Thursday, March 9, is Lyle DeVore, promoter of Howard Commander’s famed Albany-Saratoga and Lebanon Valley Speedways in New York State.

The show is free to watch and participate in. Production is extremely low-budget – no money has been spent to date, in fact – and the show is simply streamed via cell phone camera. Through its first 12 weeks, “Let’s Talk Racing!” has gathered an average weekly audience of nearly 3,000 unique viewers and well over 330,000 impressions on Facebook via shares, likes, and comments.

“I give Mike all the credit – the show was his idea,” St. Louis said. “I don’t think either one of us expected it to take off as quickly as it has. The viewers and the drivers have been a lot of fun and we plan to keep the show going in some form or another through the racing season this summer.”

Bruno has been pleasantly surprised by the reach that the show has had. “We’ve heard from viewers from all over the U.S., Canada, Puerto Rico, Australia, England, and Brazil. It’s pretty amazing to think about,” Bruno said. “It’s not intended to be a Hollywood production; it’s just a fun thing to do and it really has given us something to look forward to during the winter. People watch to have a good time and to talk about something they love, whether they come to Devil’s Bowl or not. That was our only goal in the first place.”