BATAVIA, NY – The long wait for racing season is finally over, and to celebrate spring conditions, practice day not only served as an appetizer for race teams, it only added excitement for the 2017 season.

On a cool yet partly sunny afternoon, the 1/3-mile Genesee Speedway was the star as it was in pristine condition with only rare moments of dust combined with an incredibly smooth surface around the oval. It was a terrific opportunity for teams to prepare for the long season ahead.

A total of 66 teams took the track for the test session, including three modifieds who brought the best time of the day down to 17.3 seconds. The six weekly divisions all had representation from at least 7 cars with the sportsman topping out at 17 cars.

Once the practice sessions were concluded, the track was wetted down for the Spring Fling 100-lap Enduro. Exactly 50 cars took the green flags and within 2 laps the paint jobs were covered deep under mud.


Five red flags flew during the course of the race, which allowed for a wide range of variability in the race. A total of six lead changes occurred throughout the event, none more notable then on lap 76 when leader Harry Vosburg’s #12H was unable to fire after a red flag, throwing away his 2-lap lead. Dale Rissinger Jr inherited the lead and passed every car that was left running over the final 24 laps to claim the win in his Chevy Lumina. Jason Roncone rebounded from early incidents to finish second while Micah Brown rounded out the top three.

The Genesee Speedway will lay quiet next Saturday in preparation for opening night on Saturday, May 6 when Kohorst Custom Homes & Remodeling presents a Super 6 program starting at 6:00 P.M. It will kick off the first of 20 race dates featuring a visit by the ULMS Super Late Models on Thursday, July 6 and the first ever Topless Crate Nationals on September 16th and 17th. 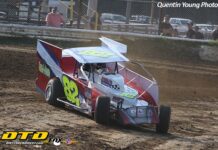