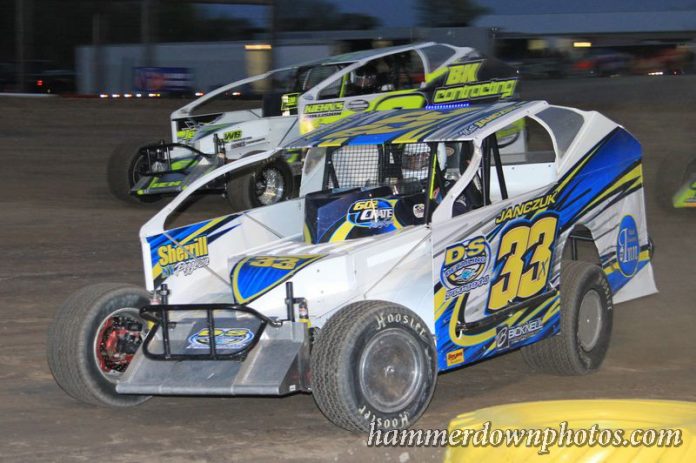 FONDA, NY – In just two weeks time the record setting King Of Dirt Racing Series will open their season at Utica Rome Speedway in Vernon, NY kicking off a historical partnership with DIRTcar racing, as the KOD/DIRTcar East Sportsman will be joined by the KOD Pro Stocks to begin an ambitious 2017 season.

It has quickly become tradition that track owners/promoters Bill and Kim Shea host King Of Dirt Racing for the season opener and anticipation is at an all-time high for the series to kick off with the newly formed alliance with DIRTcar Racing. KOD will serve as the DIRTcar East Region tour, giving drivers who follow the tour a shot at the DIRTcar Sportsman title and those from other regions a shot at bonus points.

Last year when the 1-800-GOT-JUNK? King Of Dirt Racing Sportsman Series presented by Dean’s Electrical Service and Dodson Construction rolled into the action track of the east a Utica Rome Speedway record was broken. Previously 52 had been the tracks highest car counts in Sportsman action until 56 drivers checked in to attempt qualifying for the KOD Spring Fling.

Heat races during the record setting night were won by Cody Clark, Brad Alger, Dave Marcuccilli, Glenn Forward, and Rocky Warner. Heat races were set by the draw, however in 2017 KOD has gone to timed hot laps, which will set heat race lineups.

In the feature event Rocky Warner was victorious for his 4th career KOD Sportsman win followed by Dave Marcuccilli, Connor Cleveland, Chris Mackey, and Dave Moyer. It was the beginning of a championship season for Connor Cleveland; as he went on to claim the King Of Dirt Racing Sportsman crown.


In the Lazzaro’s Auto Body King Of Dirt Racing Pro Stock Series presented by Stone Motorsports 36 drivers attempted to qualify and thanks to the generosity of track promoter Bill Shea all would start the feature event. Heat races were won by Robbie Speed, Mike Welch, and Jay Casey.

Total between the two divisions KOD Racing had 92 competitors throw down for the crown and this year promises to be just as exciting for fans, drivers, and crew members.

“When I talked with Kim and Bill they wanted to be sure to open the season at Utica and that’s kind of become a tradition now that we look forward to,” said KOD promoter Rob Hazer.

Admission prices for the evening are $16 for adults, $13 for senior, military, or students, and kids under 16 are free. Pit admission is $27 with a license and $30 without. For more information visit www.uticaromespeedway.com.

With the schedule now set and the rules up on the website, it’s only a matter of time before a very busy season of racing gets underway for King Of Dirt Racing.