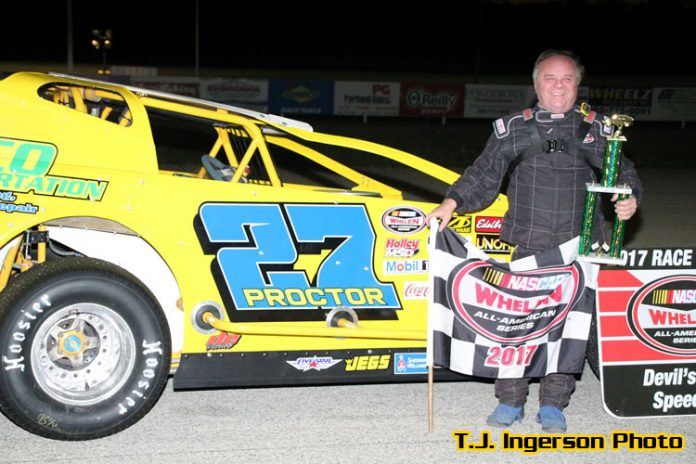 WEST HAVEN, Vt. – Jonathan Bouvrette blew the field away at Devil’s Bowl Speedway on Saturday, May 20, driving from last on the 27-car starting field to win the 43rd annual “Spring Green 117” event for the American-Canadian Tour (ACT). The Blainville, Québec driver’s memorable march started with a flat tire on the starting grid, but ended with his career-first victory in the United States.

Bouvrette was scheduled to start 14th but ducked into the pit area for a tire change during pre-race pace laps. As he began his climb through the field, fellow Québec driver Dany Trépanier ran up front in a fierce, showstopping battle with Vermont drivers Bobby Therrien and Scott Payea. The trio banged fenders and beat on doors as they weaved through lapped traffic, thrilling the large crowd as Dillon Moltz and Rich Dubeau also became players in the front of the pack.

Bouvrette’s No. 41 Traffic Tech/Motos Illimitees Ford entered the picture late in the going, joining the lead group at a restart on lap 76. He picked cars off one by one on the outside lane, eventually drawing even with leader Therrien with 20 laps remaining. Bouvrette took the lead at lap 98 and withstood a final restart five laps later to sail to the win.

A sizeable group of Québécois race fans made the trip to Devil’s Bowl and celebrated with Bouvrette’s enthusiastic and smoky burnout. Bouvrette’s win made him the first driver from Québec to win a feature race at Devil’s Bowl Speedway since Jean-Paul Cabana in 1973. Bouvrette dedicated the victory to Tom Curley, founder and president of ACT, who passed away on May 5.

Eighteen year-old Dylan Rabtoy of Swanton, Vt., posted his second career victory in the 20-lap feature for the Rosen & Berger Auto Recyclers Super Stock division. Rabtoy led every lap from the pole position, but had his hands full with defending champion Jim McKiernan through a pair of restarts. Scott FitzGerald finished third, followed by rookie Eric Messier and Jared Blake.

Brad Bertrand of Ferrisburgh, Vt., began the 2017 season the same way he ended 2016, by winning the 15-lap Portland Glass Mini Stock feature. Bertrand was involved in a multi-car crash on the opening lap and returned from pit road to drive from 12th place to the win. Roo Forrest, just days after his 17th birthday, finished a career-best second after leading several laps. Rookie Shawn Moquin finished third in his first career start, followed by Andrew FitzGerald and Zach Wood.

Devil’s Bowl Speedway will be in action on Wednesday, May 24, with the first-ever “Show & Go” Wednesday Drag Racing Series. Vehicles of all types are welcome to compete in fun, low-pressure double-elimination races on a 250-foot drag strip set up on the frontstretch of the Devil’s Bowl asphalt track. Gates open at 6:00 p.m. with racing scheduled for 7:00 p.m.

Stock car racing returns with a busy Memorial Day weekend on May 27-28, featuring fireworks and the wild-and-crazy Enduro Series on the asphalt track on Saturday night and the King of Dirt Series Sportsman Modifieds and the Sprint Cars of New England on the dirt track on Sunday night.
Devil’s Bowl Speedway is located on Route 22A in West Haven, Vt., four miles north of U.S. Route 4, Exit 2. For more information, visit www.DevilsBowlSpeedwayVT.com or call (802) 265-3112. Devil’s Bowl Speedway is on Facebook at @DevilsBowlSpeedway and on Twitter, Instagram, and Snapchat at @DevilsBowlSpeed; follow the action using the hashtag #DevilsBowl.