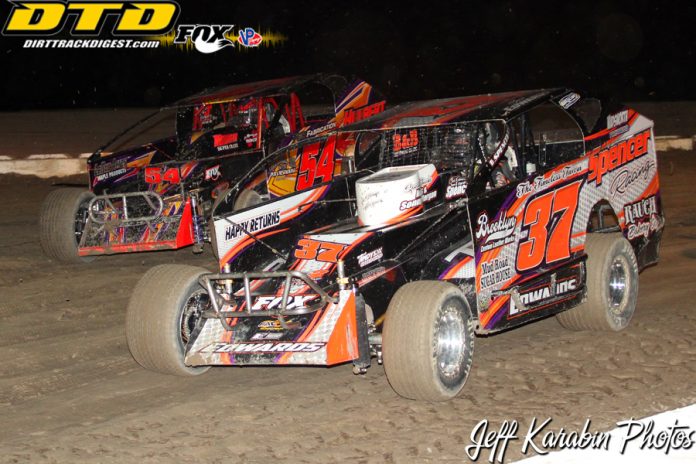 WEST HAVEN, VT – It’s sometimes better to be lucky than good, but Chad Edwards found out that it’s even better to be both at The Dirt Track at Devil’s Bowl Speedway on Sunday, May 28. A big crowd got its money’s worth at the action-packed event and saw Edwards survive a rough race to win the “Green Mountain State Clash” for the King of Dirt Series Sportsman Modifieds and Lacey Hanson make history as the first woman in Vermont racing history to win a Sprint Car race. Joey Trudeau and Jason Porter were also in victory lane during the event.

Edwards, of Mayfield, N.Y., was one of a track record 42 Sportsman Modified drivers on hand for the Devil’s Bowl dirt racing season opener, which also kicked off the traveling King of Dirt Series and the DIRTcar Sportsman Modified Eastern Region. Aggressive driving and a soft track surface played a factor in the main event, leading to rash of caution flags late in the going, but the racing was competitive throughout the distance.

Cody Bleau of Defreestville, N.Y., led the opening 20 laps from the pole position, collecting $400 in lap leader bonus money in the process. Kenny Tremont Jr. took command at lap 21 and was challenged by Scott Duell and Rocky Warner, and that trio battled in close quarters for several laps.

Duell nosed ahead of Tremont with a power move on the outside lane with six laps left, but suffered a mechanical failure immediately after and was forced to retire. Warner took over at a restart on lap 30 but caught a bump in Turn 4 two laps later and spun out, collecting Tremont and taking both out of contention as the crowd went wild. Edwards, running third at the time, inherited the top spot and outlasted Tim LaDuc on three late restarts to take the win; Edwards and the Spencer Racing No. 37 team celebrated at full volume in victory lane.

LaDuc, of Orwell, Vt., put together an incredible comeback drive in the late stages. After being placed at the back of the pack for his involvement in a spin on lap 20, LaDuc recovered from 21st place in just 12 laps to reach Edwards and make a charge for the win. Bleau, who was up and down in the last 15 laps, bounced back to take third place. Adam Pierson finished fourth with Tim Hartman Jr. – from 26th at the start – in fifth place. David Schilling, Bobby Hackel, Kevin Chaffee, Jackie Brown Jr., and Justin Severance completed the top 10 in order.
LaDuc will get credit for the win and the accompanying championship points among weekly NASCAR Whelen All-American Series competitors, followed by Hackel, Brown, Severance, and Vince Quenneville Jr., who finished 13th overall.


Qualifying heat wins went to Duell, LaDuc, Tremont, and Joey Scarborough, while Hackel and Severance won consolation races. Duell set the new track record in qualifying with a lap of 17.455 seconds. Michael Wagner-Fitzgerald of Gansevoort, N.Y., walked away from a violent, breathtaking flip in the second consolation race, reaching approximately 10 feet in the air as it rolled down the frontstretch. The crowd gave Wagner-Fitzgerald a standing ovation when he climbed out of the car under his own power.

The Sprint Cars of New England (SCoNE) tour was featured at the event, and cousins and local favorites Lacey and James Hanson of Orwell, Vt., drove the grandstand crowd into a full-fledged frenzy with a dominating performance in the 30-lap feature race. James Hanson drove from 14th starting position to the lead early in the race, but Lacey Hanson moved past him soon after and buried the field to win by a landslide. In doing so, Hanson scored the second win of her SCoNE career and became the first woman to win a Sprint Car race in Vermont.

The largest ovation of the night came when Lacey Hanson climbed on top of her car to celebrate in victory lane. James Hanson finished second with a solid performance. Will Hull of Plainfield, Vt., took third place with Chris Donnelly fourth and Jake Williams fifth. Dan Douville was uninjured in a nasty flip.

Winners of the Devil’s Bowl Speedway Downtown Car Show & Fan Festival, held in Rutland, Vt., on Sunday May 21, were announced at the start of the show. LaDuc took top honors in the fan voting for the Central Vermont Motorcycles Sportsman Modified division, with Bussino winning the Super Stock class and Chris Charbonneau taking the Mini Stock trophy.
Devil’s Bowl Speedway is back in action on its 1/2-mile Asphalt Track on Saturday, June 3 at 7:00 p.m. with a 50-lap special for Late Models, along with the Ladies Mini Stock division and the weekly NASCAR Whelen All-American Series divisions.

The Dirt Track races on Sunday, June 4 at 6:00 p.m. with a special event for the Sportsman Coupe division and the debut race for the new Catamount Mini Sprints, as well as the weekly NASCAR classes.

General admission at each event is $12 for adults, $10 for seniors, $5 for teenagers, and free for kids age 12 and under. Thomas Dairy also presents the Kids’ Poster Contest on both nights, in which kids are encouraged to create a poster of their favorite racer.

Did Not Qualify (alphabetical order, by last name):