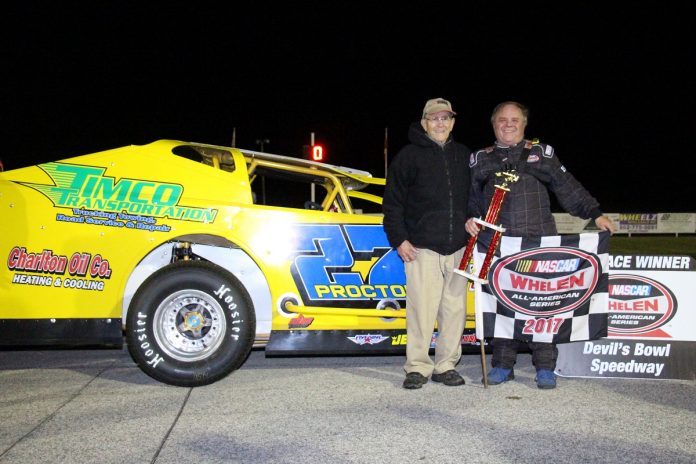 WEST HAVEN, Vt. – Ron Proctor has made one thing clear: The asphalt track title at Devil’s Bowl Speedway will have to go through him.  The longtime stock car driver and former two-time champion made it back-to-back wins at the Vermont track to open the NASCAR Whelen All-American Series season on Saturday, May 27, taking his second dominant score in a row.  Also winning at the event were Jim McKiernan, Brad Bertrand, Connor Watrous, and Richie Turner.

Proctor’s victory came in a 50-lap feature event for the O’Reilly Auto Parts Sportsman Modified division, which featured an experimental format for the first time.  The race was run in three stages, with Billy Lussier easily winning the first 20-lap leg and $250.  After a random re-draw done by fans to line up the middle round, Vince Quenneville Jr. dominated the second stage – a 15-lap sprint – and also copped $250.

Quenneville drew an invert pill of “six” after his victory to set up the final 15-lap dash, putting Charlton, N.Y., driver Proctor on the pole for the third stage.  For the second week in a row, Proctor quickly drew away from the field and stormed to the victory and a quick $500.  Jason Durgan of Morrisonville, N.Y., rebounded from a miserable outing at the season opener to take second place, and Joey Roberts of Fletcher, Vt., was third.  Lussier and Jackie Brown Jr. completed the official top five finishers.

Brad Bertrand matched Proctor’s feat in the Portland Glass Mini Stock division, taking his second-straight win to open the year with a convincing drive.  The Ferrisburgh, Vt., runner – aboard a Subaru Impreza – topped a good battle for second place between Garrett Given and Andrew FitzGerald, which went Given’s way.  Rookies Shawn Moquin and Cam Gadue were next in line.


Thirteen year-old Connor Watrous of Bomoseen, Vt., made history as the first winner in the new Bandit division for youth racers age 10-15.  A trio of youngsters, driving cars that fit the Mini Stock rulebook, satisfactorily completed training earlier in the day and were turned loose for an eight-lap feature race.  Watrous made his way past Evan Roberts, then tracked down leader Tanner Lunt to make a late pass and take the win.  Lunt, 14, of Fort Ann, N.Y., finished second, with Roberts, 11, of Fletcher, Vt., in third.

Richie Turner of Highgate, Vt. was an easy winner in the Enduro Series, taking a 50-lapper that thinned out quickly due to early crashes and attrition.  Cory Gray finished second as the only other driver on the lead lap.  Loran McNally finished third with Andy Botala and double-duty racer Cam Gadue behind him.

Devil’s Bowl Speedway completes a busy Memorial Day weekend on Sunday, May 28, with the King of Dirt Series Sportsman Modifieds and the Sprint Cars of New England on the 3/10-mile dirt track.  Super Stocks and Mini Stocks will also be in action.  General admission is $15 for adults, $13 for seniors, $5 for teenagers, and free for kids age 12 and under.  Grandstand gates open at 4:30 p.m. with racing at 6:00 p.m.  As many as 40 Sportsman Modifieds are expected to attempt to qualify for the King of Dirt Series feature race.