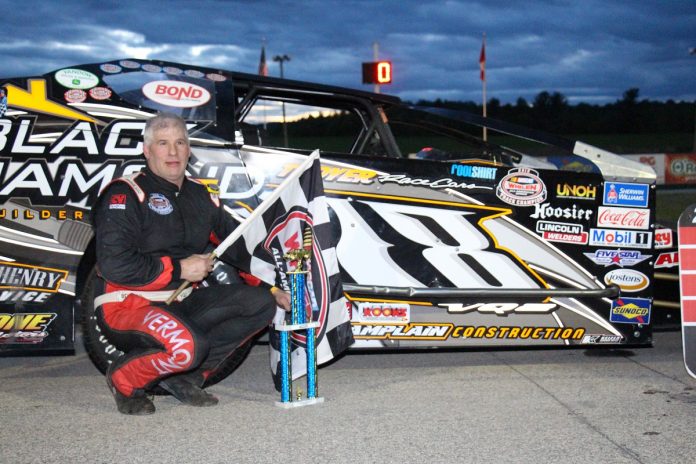 WEST HAVEN, Vt. – There was no doubt about the strength of Chris Bergeron’s racecar at Devil’s Bowl Speedway on Saturday, June 3.  The former track champion drove a flawless race on the 1/2-mile Asphalt Track at Devil’s Bowl for a dominating victory in NASCAR Whelen All-American Series competition.  Also in the winner’s circle during the event were Vince Quenneville Jr., Eric Messier, Brad Bertrand, and Stephanie Roberts.

Bergeron was stellar in the opening 50-lap feature for the five-race Driven Transport Late Model Series.  The Claremont, N.H., driver drew the outside pole starting position and immediately jumped past pole sitter Claude Leclerc into the lead.  Only one caution flag slowed the race on lap 7, and Bergeron handled the restart easily, cruising to the win for the sixth time in his career at Devil’s Bowl.

Defending track champion Josh Masterson of Bristol, Vt., was the only driver that could even sniff Bergeron, but finished second about 10 car lengths behind in his first start for Barnett Motorsports.  Seth Bridge had a solid outing to finish third.  Leclerc – the popular 75 year-old “Iron Man” from Quebec – finished fourth with rookie Dylan Payea fifth.

Vince Quenneville Jr. was even better in the 25-lap O’Reilly Auto Parts Sportsman Modified feature and buried the field with a half-lap margin of victory.  The Brandon, Vt., racer crashed in qualifying but dodged a bullet with only cosmetic damage and a flat tire; he started on the pole for the main event and left the field in his wake.

Jackie Brown Jr. had a season-best runner-up showing, holding off a race-long charge from Joey Roberts, who took third.  Ron Proctor came from the back to finish fourth and Mike Wells rounded out the top five.

The Rosen & Berger Auto Recyclers Super Stocks had the best racing of the night in their 20-lap feature.  Rookie Eric “Mongo” Messier of Hinesburg, Vt. – the 2016 Mini Stock champion – had a good lead erased by a caution flag with six laps to go, and was beaten on the subsequent restart by Scott FitzGerald.  It looked as though FitzGerald, of West Rutland, Vt., would take the win, but a final caution set up a green-white-checker restart and Messier took the lead back and sailed to the win.

FitzGerald hung on for second place with rookie Brett Wood an impressive third.  Austin McKiernan came home in fourth place, while Jared Blake drove from 12th at the start to finish fifth.

The Ladies Mini Stock division made its debut as a regular class with a 10-lap feature race.  Stephanie Roberts of Fletcher, Vt., took down the win in convincing style.  Seventeen year-old Maddy Rabtoy finished second, followed by Lynn Denton and Sami Sargent.

Devil’s Bowl Speedway is scheduled for a Dirt Track event on Sunday, June 4 at 6:00 p.m., with a special event for Sportsman Coupes, as well as Sportsman Modifieds, Super Stocks, Mini Stocks, and the new Catamount Mini Sprint club.  General admission is $12 for adults, $10 for seniors, $5 for teenagers, and free for kids age 12 and under.  Grandstand gates open at 4:30 p.m. with racing at 6:00 p.m.

Did Not Start: # Hunter Given, Orwell, Vt.