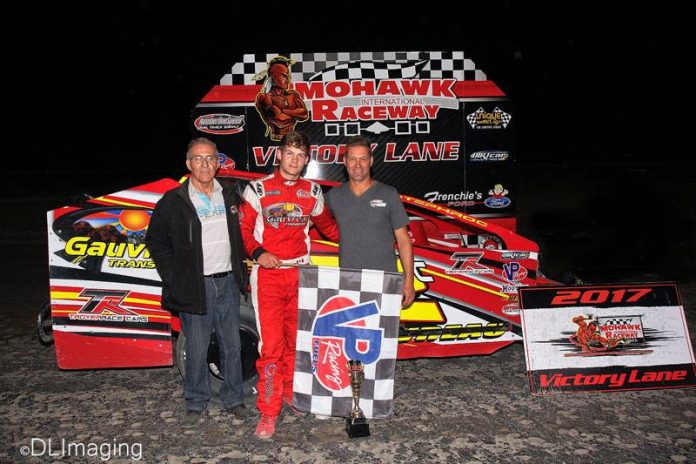 AKWESASNE, NY – Yet another fantastic night of racing took place this past Friday night at the Mohawk International Raceway as the Empire Super Sprints and Quebec Lightning Sprints joined a regular card of racing. Steve Poirier dominated the Empire Super Sprint event taking his record 8th victory and 63rd of his career, Eric Sunborg edged out Sabrina Blanchet in a great battle for the Lightning Sprint feature, Cedric Gauvreau claimed career win #1 in Sportsman, Agwalee White did the same thing in Novice Sportsman, Deric Ellsworth was victorious for the 3rd time in Mod Lite while Richard Thorton continued his dominance grabbing his 3rd Bandit feature of the year.

The 25 lap Sportsman feature saw Gab Cyr jump out to the early advantage over Cedric Gauvreau, Delbert Legrow, Anthony Rassmussen and Miguel Peterson. Cyr was on a mission as he pulled away from a quality field in the opening laps but Gauvreau stayed within 5 car lengths with Rassmussen wrestling the 3rd spot away from Legrow by lap 10. With these 3 drivers in front the rest of the field could do nothing but watch as Cyr and Gauvreau battled for the lead with Rassmussen a straightaway back in 3rd. On lap 19 Gauvreau would finally get the break he was looking for as he caught Cyr in traffic and was able to drive by to take over the top spot with Rassmussen, Miguel Peterson and Chris Frennier giving chase. In the closing laps Gab Cyr did everything he could to run down the leader but it would not happen as Cedric Gauvreau claimed his first ever Sportsman win with Gab Cyr crossing in 2nd, Anthony Rassmussen, Chris Frennier and Zack Arquiett who came from 9th to complete the top 5.

The Empire Super Sprints were back for their only appearance in 2017 and the 23 caqr field did not disappoint. Former 358 Modified feature winner Chris Jones took control of the 25 lap event at the drop of the green flag with Steve Poirier, Jordan Poirier, Jeff Cook and Matt Billings completing the top 5. Jones had a stout race car and would lead the opening 10 laps but defending series champion ad race winner Steve Poirier had other ideas. Poirier would clear Jones for the lead bringing nephew Jordan Poirier and Jeff Cook with him to the top 3 while Billings still completed the top 5. On lap 15 Yan Bilodeau clipped an infield tire in turn 2 sending his car into a wild spin. Bilodeau was unharmed but his car sustained heavy damage. Under the same caution Jeff Cook would also slow with problems and head pit side for the night. On the restart Steve Poirier once again charged out to a comfortable lead but Coleman Gulick charged from just outside the top 10 to the 6th spot with a big move off turn 2. 1 lap later he would get by Chris Jones for 4th and would make a run at the top 3. In the end nobody had anything for “Fireball” as Steve Poirier would go on to claim his 3rd straight win and 8th overall at Mohawk with the Empire Super Sprints. Jordan Poirier would back up his win at Cornwall last Sunday with a 2nd place effort, Matt Billings claimed his best ever finish of 3rd with Coleman Gulick and Chris Jones rounding out the top 5.

The Quebec Lightning Sprints were also making their return to Mohawk and snowmobile world champion Sabrina Blanchet would make a statement as she jumped into the lead from the drop of the green with Lou Torres and Eric Sunborg completing the top 3. On lap 3 the first yellow flew as Torres’ night would come to a quick end as he slowed in turn 1. On the restart it was all about Blanchet as she once again jumped out to a healthy lead and was destined to claim her first ever Mohawk victory. Eric Sunborg was doing all he could to keep the leader close and he did just that as he stayed within 4 car lengths which would be very important as the leaders entered traffic. In the final laps Blanchet struggled to get through traffic allowing Sunborg to close in. On the final lap Sunborg would make his move on the top lane and race Blanchet side by side. As they exited turn 4 coming to the checkered flag Eric Sunborg would lead the final 150 feet to claim the win over Sabrina Blanchet who claimed her best ever finish of 2nd. Guillaume Neiderer shook off the frustrating ESS finish earlier in the night to claim 3rd at the checkers.

In Mod Lite Deric Ellsworth has been the driver to beat winning 2 of the first 3 races and would look to keep the roll going from his 4 starting spot. Scott Mere would take the lead at the drop of the green but Ellsworth would make the charge from 4th to first and begin to pull away. With Mere, points leader Nick Mallette, Brady Rookey and Dan Reif completing the top 5. Ellsworth looked to be headed for victory but a caution flew on lap 14 setting up a 1 lap shoot out. On the restart Scott Mere tried to keep pace with the leader but it would not happen as Deric Ellsworth would go on to collect his 3rd win and 2nd in a row over Scott Mere, Nick Mallette, Dan Reif and Brady Rookey.

The Novice Sportsman saw Brian McGinley jump out to a quick lead with 15 year old Agwalee White chasing him from the runner up position. McGinley would lead the opening 4 laps until a scary moment in turn 1 saw last weeks winner Kurt Russell tangle with Regi Castelle sending his car into a series of violent flips. After some tense moments Russell would climb from his destroyed car under his own power and would be ok. When the green flew Brian McGinley held the lead but Agwalee White had other plans. White would slip by to take over the top spot with McGinley falling to 2nd and Dana Francis completing the top 3. Over the final laps Dana Francis would get by for 2nd and tried everything to get by White. At the finish Agwalee White would hold on for good as he claimed his first ever Novice Sportsman win. Dana Francis would hold o for 2nd with McGinley 3rd, Melvin Rush and Thomas Jock III rounding out the top 5.

In the 10 lap Bandit feature Richard Thorton was clearly the class of the field as he took the lead early on from Gary Sharlow an Curtis Smith. After a heartbreak on the final lap 1 week ago Thorton would get redemption as he dominated the caution free Bandit event for his 3rd win of the year. Curtis Smith would cross in 2nd with last weeks winn Gary Sharlow coming home 3rd.

Next week The 358 Modifieds will be back on the card along with a full show in all classes plus the first appearance of the year for the Eastern Ontario Vintage Stock Car Club. The green flag drops at 7:30pm.