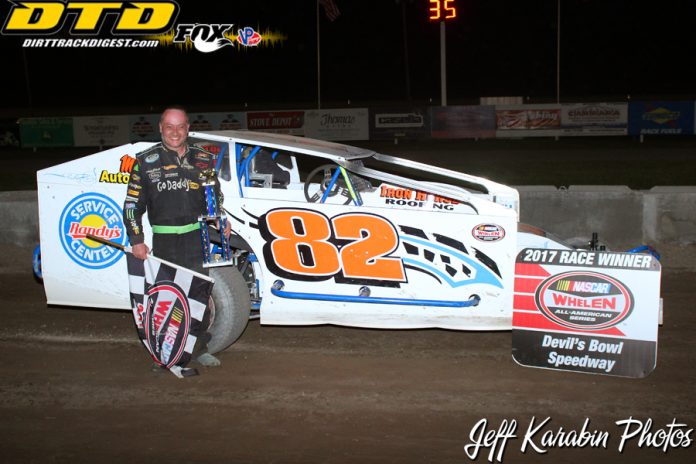 Howe had some good luck to go along with a strong car in the Central Vermont Motorcycles Sportsman Modified division.  He drew the number-one starting position for both his qualifying heat race and the 35-lap main event and was able to stay there the entire night.  A rash of early caution flags in the feature race gave the rest of the field several attempts at taking Howe’s lead away, but the former Devil’s Bowl 358-Modified winner and multi-time champion in his native New Hampshire never faltered.

Only Kenny Tremont Jr., after working his way from the 10th starting spot, was able to mount a serious challenge for Howe, but could not find a way past Howe on the dry slick track.  Tremont took runner-up honors with Vince Quenneville Jr. a solid third.  Jackie Brown Jr. rebounded from an early crash to finish fourth, while Bobby Hackel charged from 14th to fifth place.  Chad Miller, Justin Severance, and Justin Comes were next in line, and Mike Block drove from 21st to finish ninth.  Billy Lussier completed the top 10 runners.

Long-hauler Jason Porter of Freeport, Maine, made it a two-for-two start to the season in the 15-lap Portland Glass Mini Stock feature.  The opening night winner drove from 10th place at the start for his second-straight victory.  Sophomore driver Chris Charbonneau collected his career-best finish as the runner-up after leading several laps.  Robert Garney – who traveled home to Fort Edward, N.Y., to get a backup car after qualifying – finished third ahead of rookies Willie Rice and Josh Kennedy.

Sami Sargent of Bristol, Vt., became the first winner on the 3/10-mile Dirt Track at Devil’s Bowl in the new Ladies Mini Stock division.  After a fourth-place finish on the 1/2-mile Asphalt Track a week ago, Sargent passed both Lynn Denton and Megen Bradley to take the win.  Denton was the runner-up with early leader Bradley third.

Alex Bell of Cambridge, N.Y., made a triumphant return to his home track with the visiting Lucas Oil POWRi Outlaw Midget Series.  A former Sportsman Modified winner on both dirt and asphalt at Devil’s Bowl, Bell survived a carnage-filled race for the wingless Midget cars.  Multiple incidents left several cars damaged and one crash sent Andy Barrows flipping over end-over-end; he was uninjured.

The race was trimmed from 20 laps to 15, but Bell didn’t need the help as he had a fast car and won going away.  Veteran racer Rick Stone, 68, finished as the runner-up.  Tyler Rivard, who crashed out of the lead in the incident with Barrows, passed several cars in the final laps to take third place.  D.J. Moniz and Nate Furman completed the top five.

The brand-new Catamount Mini Sprint club debuted with a competitive 15-lap feature that saw good racing through the field.  Nadine Coates led the first 10 laps before Robert Hagar crashed in lapped traffic, flipping his car onto its top wing; he walked away uninjured.  At the restart, Sunapee, N.H.’s Bob Griffin – driving his son’s car after having mechanical problems with his own car in the heat race – took the lead and sailed to the win.  Coates finished second with 15 year-old Colby Beinhaur third.  Mark Mulready and Sean Beinhaur were next in line.

Devil’s Bowl Speedway is back in action on The Dirt Track with a special Tuesday night event on June 13 at 7:00 p.m., as the King of Dirt Series comes to town for the first Small Block 358-Modified race at Devil’s Bowl in three years.  A-Verdi Storage & Office Solutions presents the 40-lap, $3,000-to-win “Vermont Modified Mayhem” event, which is expected to draw star drivers Matt Sheppard, Tim Fuller, Ronnie Johnson, Matt DeLorenzo, and many more.  Also on the card is the inaugural “Ron Casey Memorial” 20-lap shootout for Sportsman Modified non-winners, paying $500 to win.