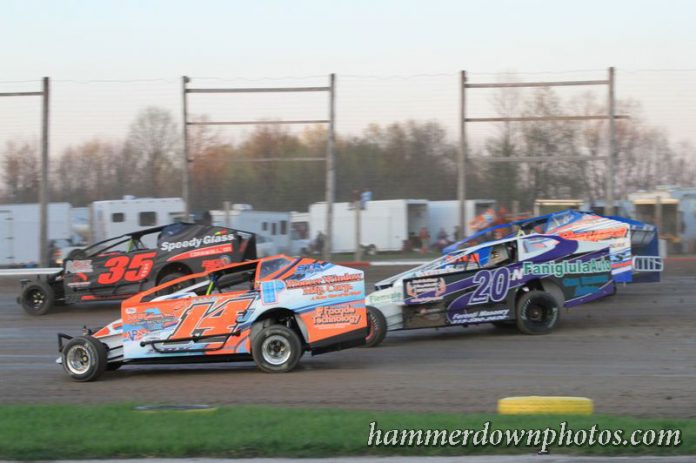 CONCORD, NC – The DIRTcar Sportsman Series Central Region is about to get busy with three races scheduled in two weeks beginning on Tuesday, June 20 at Outlaw Speedway. The Series will then travel to Can-Am Motorsports Park on Wednesday, June 28and Weedsport Speedway on Monday, July 3 for the Sportsman Classic.
The Central Region has completed two races so far this season at the end of April where Todd Root picked up a victory at Fulton Speedway on April 28 and Rock Warner claimed a win at Utica-Rome Speedway on April 30. The Series averaged more than 40 cars through the first two events with nine different drivers earning top-five finishes.
“Fulton and Utica-Rome saw great car counts and very competitive racing,” says Cory Reed, DIRTcar Sportsman Series director. “We expect the same at Outlaw, Can-Am and Weedsport.”
The Central region for the Sportsman Series offers a unique opportunity to the drivers who follow the tour because its schedule is different than the other three regions, Reed says.
“The Central Region of this year’s schedule is different than the other three regions in that five of the six regional events will be completed by Independence Day,” Reed says. “Teams will have a pretty good idea where they will finish in the region after Weedsport.”
The schedule creates an interesting wrinkle in the points system for drivers who want to take advantage. If the Central Region is a driver’s primary region, they’ll be free at the end of the season to gain bonus points in another region closer to the end of the season. Teams competing in other regions can use Central Region events to gain bonus events for other regions, which don’t hit full speed until July or later.
“I would expect some teams from other regions will use these three shows as extra-start bonus events, since they get extra points toward the DIRTcar Sportsman Series championship for attending,” Reed says.
The end result should be another full field of cars at all three events at tracks with a heavy concentration of Sportsman Modified racers in the immediate area. Following the three-race stint that ends on July 3, the DIRTcar Sportsman Central region will wrap-up at Brewerton Speedway on September 15.
The Eastern Region, which completed its first race on May 28 at Devil’s Bowl (VT) Speedway where Chad Edwards went to Victory Lane, will continue with it’s action on July 15 at Lebanon-Valley Speedway. The Western Region kicks off on July 25 at Ohsweken Speedway alongside the World of Outlaws Craftsman® Sprint Car Series in the Six Nations Showdown. The Northern Region will host its first race on August 11 at Quebec’s Autodrome Granby. The six-race combined region schedule begins on September 30 at Fulton Speedway. For the full schedule of DIRTcar Sportsman Series events, visit www.dirtcarump.com/schedules.