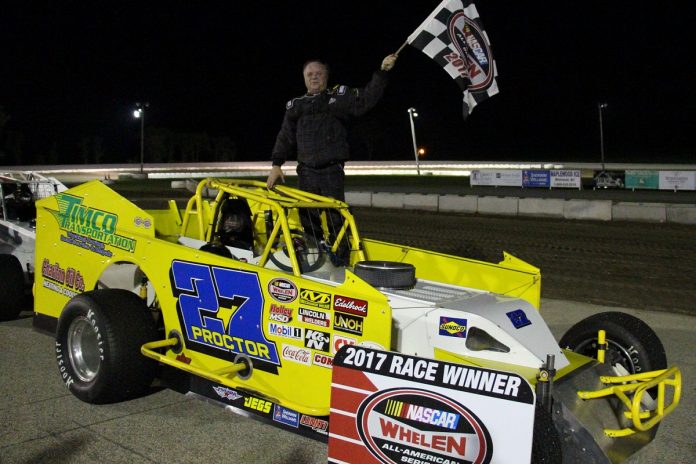 Defending champion Durgan, of Morrisonville, N.Y., posted his first win of the season in the opening round.  After a rough start to the season, Durgan benefitted with an up-front starting position in the handicap.  Rookie Chad White led the first two circuits from the pole position before Durgan took over and never looked back.  Jackie Brown Jr. was the biggest mover, quickly getting from sixth to take second spot away from White on lap 6.  White held on to third place for his best finish in an open-wheel Sportsman Modified.  Billy Lussier and Vince Quenneville Jr. were next in the finish order.

The nightcap was a wild race and left several cars with damage.  Charlton, N.Y., racer and two-time track champion Proctor ran away from the field from the opening lap, but behind him the action was intense.  Several incidents of high-speed contact kept things tense until a three-car wreck in Turn 4 destroyed the cars of White and Lussier.  When the smoke cleared, Proctor had collected his third win of the season, and Brown marched forward to take second again.  Quenneville was third ahead of Joey Roberts and Durgan.

Brett Wood of Georgia, Vt., scored a career-first win in the 20-lap feature for the Rosen & Berger Auto Recyclers Super Stock division.  Wood came from fourth at the start to take the lead from Garrett Given at the halfway point of the race, then outlasted pressure from defending champion Jim McKiernan and opening night winner Dylan Rabtoy on two late restarts.

Wood’s victory made him the fourth different Super Stock winner in as many races in 2017 and the second-straight rookie to win.  McKiernan and Rabtoy battled to the very end for second place, with McKiernan getting the spot.  Rabtoy settled for third place, followed by R.J. Germain and Shawn Duquette.

Portland Glass Mini Stock driver Brad Bertrand of Ferrisburgh, Vt., became the first racer in any division to win four consecutive races to open the season since the present-day 1/2-mile Asphalt Track was built in 2010.  Bertrand had to work harder this time in the 15-lap feature, but took the lead from double-duty racer Given after halfway and cruised to the win.  Given finished a strong second, and rookie Shawn Moquin nipped Andrew FitzGerald and the finish line for third place.  Another rookie, Cam Gadue, finished fifth.

Thirteen year-old Connor Watrous of Bomoseen, Vt., made it two-for-two in the new Bandit Youth Mini Stock division for drivers age 10-15.  Watrous took the lead on a restart halfway through the 8-lap race and ran away for the win.  Tanner Lunt finished second, with newcomer Nick Austin-Neil third in his first race.  Early leader Evan Roberts was fourth and Harley Rogers rounded out the field in her first start.

Devil’s Bowl Speedway is in action on its 3/10-mile Dirt Track on Sunday, June 18 at 6:00 p.m., with another “topless” event for Sportsman Modifieds, along with Super Stocks, Mini Stocks, and the new Catamount Mini Sprint club.  General admission is $12 for adults, $10 for seniors, $5 for teenagers, and free for kids age 12 and under.  Grandstand gates open at 5:00 p.m. with racing at 6:00 p.m.  Kids Bicycle Races will be held at intermission.